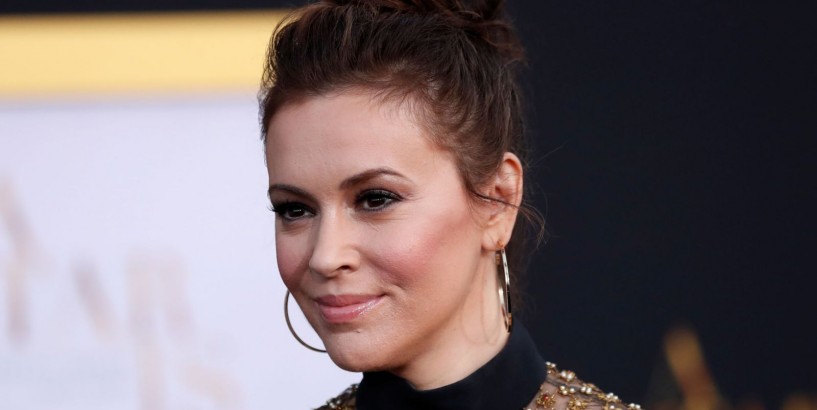 Actress Alyssa Milano has called for women to join a "sex strike" to protest against strict abortion laws in the US.

The former Charmed star, who has been one of the leaders of the #MeToo movement , urged women to stop having sex "until we get bodily autonomy back".

Her rallying call came days after Georgia became the fourth US state this year to make abortion illegal as little as six weeks into a pregnancy.

The so-called "heartbeat law" bans termination as soon as a foetal heartbeat can be detected, before some women even know they are pregnant.

Our reproductive rights are being erased.

Until women have legal control over our own bodies we just cannot risk pregnancy.

JOIN ME by not having sex until we get bodily autonomy back.

— Alyssa Milano (@Alyssa_Milano) May 11, 2019 In a post on Twitter, Milano wrote: "Our reproductive rights are being erased. Until women have legal control over our own bodies we just cannot risk pregnancy.

Advertisement "Join me by not having sex until we get bodily autonomy back. I'm calling for a #SexStrike. Pass it on."

The Hollywood actress urged women to "protect your vaginas", adding: "Men in positions of power are trying to legislate them."

More from Abortion Abortion banned in US state of Georgia at around six weeks of pregnancy Stars of Derry Girls join Northern Ireland abortion law protest Pope Francis criticised for comparing abortions to hiring a 'contract killer' Majority support decriminalising abortion in Northern Ireland, opinion polls suggest Women fear for their safety and loss of rights if US abortion laws change 'States must step up and defend our rights to abortion' Milano appeared to have the support of fellow actress Bette Midler who tweeted: "I hope the women of Georgia stop having sex with men until these indignities are overturned."

However the call for a sex strike also prompted criticism from some women.

One Twitter user urged Milano to "stop feeding the narrative that women are providers and men are consumers of sex".

Image: Milano urged women to stop having sex 'until we get bodily autonomy back' "Bribing men for equal rights with access to our bodies is not how feminism works," she added.

Another female critic said a sex strike "feeds the narrative that women only have sex to satisfy men's sexual needs" and "it ignores women's sexuality".

"Women like sex too! It is not something we give to men to keep them happy! This pushes an outdated narrative, please stop it." she tweeted.

Others poked fun at the idea, saying they were already on a sex strike which was called "being married with children".

Georgia became the fourth US state to pass such an abortion law in 2019 along with Mississippi, Kentucky and Ohio.

Image: Women protest against Georgia's anti-abortion 'heartbeat' bill The measure, HB 481, makes exceptions to the "heartbeat law" in the case of rape and incest but only if the woman files a police report first.

If the mother's life is at risk, termination is also permitted, and the legislation allows for abortions when a foetus is determined not to be viable because of serious medical issues.

A number of other states including Tennessee, Missouri, South Carolina, Florida, Texas, Louisiana and West Virginia are considering similar proposals.