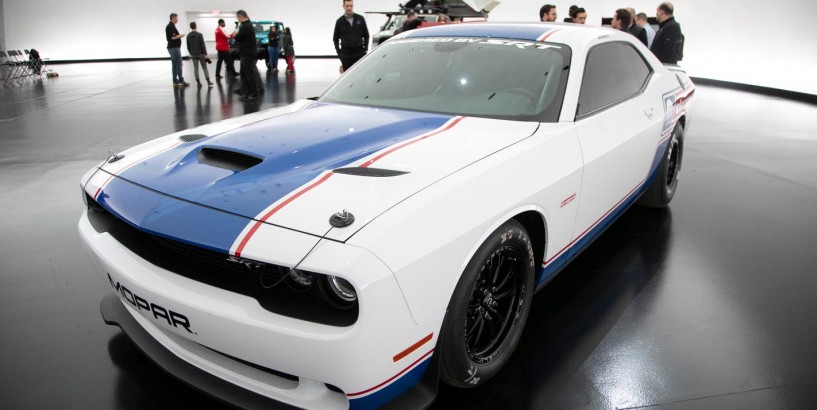 Fiat Chrysler Automobiles is going red, white and blue for its latest unveiling. That’s the color scheme for the 2020 Mopar Dodge Challenger Drag Pak, a fourth-generation offering that “displays a modern flavor, seasoned with nostalgia.” A promotional teaser video shows one of the special Challengers — the company only plans to make 50 of them — burning some serious rubber, with a printed message to “Tighten your belts!” The car is to make its debut at this year’s Specialty Equipment Market Association trade show, more commonly called SEMA, scheduled for Tuesday through Friday in Las Vegas. FCA says the vehicle is race-ready, “powered by the supercharged 354-cubic-inch Hemi V8 engine, is fitted with a T400 three-speed transmission with a Kwik-Shift manual shifter, lightweight driveshaft, front and rear racing brakes, Racetech seats, Racepak Smartwire fully programmable power distribution center and a new, exclusive Drag Pak lightweight wheel and tire package.” The hood is designed to mimic the look of the Dodge Challenger SRT Hellcat, FCA says. Order information and pricing have not been released. In addition, Mopar, FCA’s parts and aftermarket brand, says it plans to bring 14 customized vehicles to SEMA, “the biggest of all aftermarket parts shows.” Among the offerings will be a Ram 1500 Rebel OTG (Off The Grid) concept, what appears to be basically a campsite on wheels, and a Mopar Lowliner Concept, “a reimagined 1968 Dodge D200-series pickup.” Contact Eric D. Lawrence: elawrence@freepress.com or (313) 223-4272. Follow him on Twitter: @_ericdlawrence.