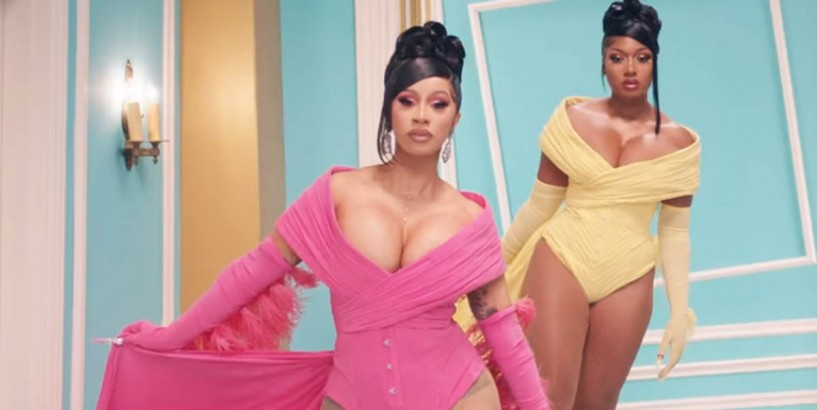 'WAP' by Cardi B and Megan Thee Stallion is a joyful role reversal. No wonder people are mad.

By the end of “WAP,” the new single by Cardi B and Megan Thee Stallion (even if you listen to the "radio edit" that is technically not profane but no less NSFW) you will clock that "macaroni in a pot" is not about food and a "bottom feeder" has little to do with fish. But you will have known from the first bass beat that maybe had you dancing in your kitchen with a wet bucket and a mop — you're probably now asking yourself if that's a metaphor, too — that the song was a glorious gender role reversal and the triumph of delicious filth. With rapid-fire flow and endlessly quotable one-liners, the two hip hop stars create a female sex-positive anthem as they trade lyrics and grab back the genre’s sexual narratives from “hard” male rappers ... and then wipe the floor dry with the boys' boxer shorts.

They also have music traditionalists complaining, social conservatives saying they are pouring holy water in their ears and other people moaning about women’s rights and the Stone Age.

“WAP” — the initials don’t mean Wireless Application Protocol, folks — is a radio-unfriendly acronym describing — nay, celebrating — the sparkling of Maya Angelou’s metaphorical diamond , and the song and video find Cardi B and Stallion, two of the biggest (female or otherwise) rappers in the game, still rising.

Related Opinion Opinion Megan Thee Stallion, Cardi B, and the revolutionary concept of pleasure politics Against a sampling of Frank Ski’s “Whores in this House,” Cardi B raps about Big Mack Trucks in little garages and hooked king cobras, telling listeners “I don’t cook/ I don’t clean/ but let me tell you/ how I got this ring.” Stallion, in her first release after an incident involving rapper Tory Lanez in which she was shot in the foot and he was arrested on gun possession charges , growls about the food chain and bottom feeders. “Your Honor, I’m a freak b----, handcuffs, leashes / Switch my wig, make him feel like he cheating.”

And with the video, featuring stunning visuals and cameos from Normani, Rosalía, Kylie Jenner, Mulatto, Sukihana, and Rubi Rose — all girls who Cardi B rated highly — the release video broke the internet.

Related Opinion Opinion There is such joy in being Black. If you don't see that, you can't understand us. Since it came out last Friday, “WAP” scored over 26.6 million views in its first 24 hours on YouTube — the biggest debut for an all female-collaboration on the platform. It debuted at No. 1 on U.S. Spotify; No. 6 on Global Spotify (with 2.34 million and 3.75 million streams, respectively); and No. 1 on U.S. Apple Music.

Christina Aguilera tweeted she was feeling things about it . Gynecologist Jen Gunter suggested women watch it to understand that their physical reactions to good sex aren't problematic. Oscar-winning actor Viola Davis tweeted an altered version of the video with her character from "How to Get Away with Murder" dancing in it. ( Cardi approved .) “As a Muslim, the song slaps. Sex positivity is halal. Carry on,” Blair Amadeus Imani, a queer African-American Muslim author, tweeted .

I see so many women who have been mansplained by their partner that they are too wet. It’s medically incorrect, infuriating, heartbreaking, and harmful. Thank you @iamcardib and @theestallion for that vagina celebration! Wish I could hand out these #WAP prescriptions. pic.twitter.com/LW38IseRKu

The conservative Republican activist Deanna Lorraine crowed on Twitter : “Cardi B and Megan Thee Stallion just set the entire female gender back by 100 years with their disgusting and vile 'WAP' song.”

James P. Bradley, a Republican congressional candidate from California, clutched his pearls and tweeted that Cardi B and Stallion “are what happens when children are raised without God and a strong father figure.” He said he accidentally heard the song and “it made me want to pour holy water in my ears.” (He also promises, if elected, to force Hasbro to change the design of Bratz dolls because, he tweeted , it "makes a joy noise when you press the button on her PRIVATE PARTS!" Apparently, women's nether regions are a major focus of his campaign.)

Related Opinion Opinion Misogyny has become central to the Republican mission — and the GOP is dying as a result Similar criticisms of the song were heard far and wide over the weekend. Carole Baskin, of "Tiger King" infamy, called it "lurid" while criticizing the video's use of big cats. Ben Shapiro, after quoting it at some length on his podcast , called it "really, really, really, really, really vulgar."

So, let’s get this straight: Women rappers glorifying in their sex is "vile," "lurid" and necessitates filling one's ears with holy water, even as male rappers' sexually demeaning women is award-winning? Kid Cudi, Kanye and Common can rap about various methods of obtaining oral sex on “Make Her Say,” and the venerable Dr. Dre can write “Yo, I tied her to the bed, I was thinking the worst / But yo, I had to let my n