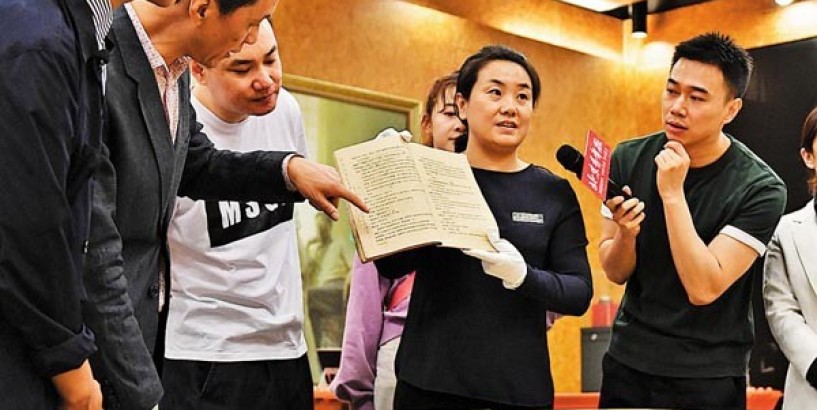 On International Museum Day－May 18－well-known actors and directors from Beijing People's Art Theater swapped roles and became tour guides, introducing the history of the theater to the public. Well, they became guides virtually, as the tour was actually livestreamed.

After more than two months of closure due to the COVID-19 outbreak, Beijing People's Art Theater reopened its museum to the public on the annual day of recognition for such institutions worldwide. The museum now accepts 100 visitors per day, Thursday to Sunday via online appointments.

To celebrate the reopening, the theater held a livestreaming session, in which veteran and young actors, along with directors and experts, gave detailed presentations of the exhibits from their own professional stance and personal experience.

The museum itself was opened in 2004, containing around 150,000 exhibits, from manuscripts of prominent practitioners in Chinese theater history, to stage props. The museum even restored the study of Cao Yu, a renowned Chinese playwright and the first director of the theater.

"The museum records the history of our theater and enlightens its future. We should assume the responsibility of inheriting our theater culture. Although many of the masters have passed away, we still remember them and often think of them when acting," well-known actor Pu Cunxin says when beginning the tour.

Upon entering the museum, a piece of wood flooring can be seen lying in the center of the hall. The seemingly unremarkable surface is the original stage used by the theater from 1984 to 2004, on which all of the plays during that period were performed.

"I almost cried when I first stood on this stage," Pu says. With his father Su Min being a director at the theater, he grew up in that world, watching plays as a child, but never had the chance to step on the stage.

"When the troupe I was in came to perform at the Beijing People's Art Theater, I helped carry boxes onto the stage. I stood there, gazing at the auditorium. For the first time I had the urge to be an actor in this theater. Several years later, I finally became an actor here and have since performed a lot of roles on this stage."