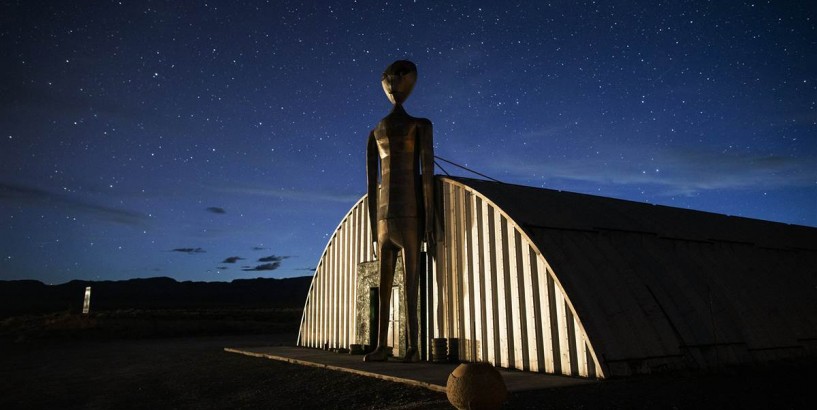 "AlienStock" was cancelled due to “lack of infrastructure, poor planning, risk management and blatant disregard for the safety of 10,000+ ... attendees.”Looks like no one will be seeing strange lights in the Nevada desert after all. The “AlienStock” music festival, which was being organized in conjunction with the viral “Storm Area 51” Facebook event , has been cancelled.

Alienstock? Man behind viral Area 51 event planning music fest Aug. 14, 2019 02:07 “We are not interested in, nor will we tolerate any involvement in a FYREFEST 2.0,” reads a statement posted yesterday on the festival’s website, citing “lack of infrastructure, poor planning, risk management and blatant disregard for the safety of the expected 10,000+ AlienStock attendees.”

The festival was being organized in part by Matty Roberts, the creator of the original joke Facebook page . It was set to take place Sept. 20-22 in the town of Rachel, Nevada.

The small town with about 70 residents has just one business, a motel called Little A'Le'Inn.

The inn's owner, Connie West, told NBC News in July that the "frenzy" caused by the impending event led to a flood of calls for room bookings. She said it was "the most overwhelmed I've ever felt in my entire life."

The festival says those who planned to attend “AlienStock” should instead go to an “Area 51 Celebration” in Downtown Las Vegas on Sept. 19th., promising “EDM artists and some unique art.”

Over 2 million people marked “going” on the original “Storm Area 51. They Can’t Stop All of Us” Facebook event and it's still unknown how many will still show up, with or without AlienStock.