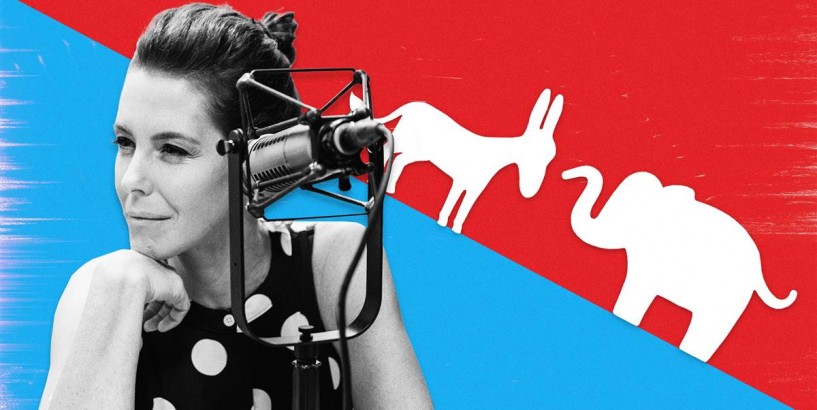 Still arguing about politics? Stephanie Ruhle wants you to do this instead

Aim to open your opponent’s mind, not change it.When my boss, MSNBC anchor Stephanie Ruhle , first approached me about developing a podcast, she had one central idea in mind: dialogue. “Our ability to debate and share ideas with those who don’t agree with us is dying,” she said. “We need to be able to have meaningful conversations about the issues that impact us most without flying off the handle and bullying our opponents into obscurity. There is nothing more unproductive than silence.” We got to work on identifying those cultural issues that tend to cause controversy. You know, the ones that prompt eye rolls and grimaces when they come up at the dinner table: feminism , privilege , #MeToo . But as we dug into these topics, one thing became very clear. In a time when our words can cause us to lose our jobs, our friends, and our social media followers, we have to learn how to have these discussions ... before launching into the discussion itself.

Our ability to debate and share ideas with those who don’t agree with us is dying.

That’s why she insisted that the inaugural episode of her new podcast series, Modern Ruhles , focus on political correctness. “Often times in tense conversations, the delivery of the message becomes the most important part,” she said. “Your sentiment will fall on deaf ears if you present your argument in an offensive or off-putting way.”

Joshua Klapow, a clinical psychologist and associate professor in the School of Public Health at The University of Alabama at Birmingham, says "we've lost the desire to learn about someone else. All we're looking for is whether it confirms or contradicts what we believe — and that's why we don't dialogue anymore."

Whether it was talking redemption post-#MeToo with Amber Tamblyn or forgiveness with Sandy Hook mother and founder of Sandy Hook Promise, Nicole Hockley , establishing how to go about having these controversial conversations made for a more meaningful and respectful outcome in each podcast. To help you have better conversations , here are some expert takeaways to keep in mind the next time you find yourself in a heated debate with someone you disagree with:

1. Before you speak, ask yourself "why?" Klapow says your goal should be seek to understand, not educate. That means shifting your mindset toward understanding their perspective as much as conveying yours. "This is basically a concept of empathy, or, in other words, understanding how this other human being you care about sees the world."

This was certainly the case for Ruhle when she conducted her interviews for her podcast. “I found that when I entered into a conversation with the goal of getting smarter on an issue, and opening my mind a bit, the experience was more constructive for everyone involved,” she says.

Klapow says to ask yourself "What is the purpose of speaking my view and what is the intended outcome? If you're just doing it to get your point across, that's a monologue, not a dialogue," he says.

Remember, it's not about changing anyone’s mind — just opening it.

2. Make it sure it's the right place at the right time Make sure you're ready to engage in a what Ruhle calls "a meaningful conversation" without flying off the handle. Before you speak, Klapow says to ask yourself the following questions:

Am in a public place? Do we have time to talk? Does my friend seem agitated? Am I in the mood for this? Do I want to have this conversation because I want to understand their point of view? Related A BETTER Way A BETTER Way Politics is ruining family dinners. Here's how to avoid it. 3. Do this, not that Controversial debates are not a zero-sum game. In an interview with Business Insider , Jeanne Safer, psychologist and creator of the podcast “I Love You, But I Hate Your Politics ," gave this piece of advice: “Do not start any political conversation with, 'How can your side possibly think...?'” “This is not a conversation-starter. It's an indictment.”

Klapow says to flip the switch and let your friend share his or her opinion first. He says your mindset has to be about learning how the person you're talking to came to this particular view or decision. Otherwise, you're just waiting for your turn to talk.

"Seeking to understand their view does not mean you have to adopt it, and it doesn't mean you have to impose yours — all it means that you understand how this other human being sees the world. And that may be different from yours. That's where we're blowing it in this country," says Klapow.

Your lizard brain is holding you back. Here's how to overcome it. Jan. 9, 2019 03:56 4. Sandwich the contentious points between positive statements Positivity is critical when you don’t see eye to eye with those in your company. Organizing the conversation accordingly is key, Kathleen Kelley Reardon, an expert on persuasion and interpersonal communication, told TODAY earlier this year .

“Earlier parts of the conversation have a halo effect on the latter part.” Instead of emphasizing the points you disagree on, Reardon encourages reframing the argument. For example, you might start a conversation off by saying “I know we agree on x and y points, but still have to talk through z.”

As important as it is to start off on the right foot, it’s also crucial to conclude the conversation in a positive way. Reflect on what you learned from the conversation even if the exchange featured moments of tension. Wrap up with something like: “I see your point, but we ultimately differ in opinion,” or “let’s agree to disagree!” Ending on a high note will keep the lines of communication open, so you can continue to better understand those who don’t share your opinions.

More from Stephanie Ruhle and Julie Brown Don't 'mom shame' Amy Schumer. Thank her. Why this is the year I'll beat "the creep" I'm trying this simple trick to unburden myself from an over-stuffed schedule 7 simple steps to more fulfilling, happier life Saying thanks to the teacher who changed my son's life Want more tips like these? NBC News BETTER is obsessed with finding easier, healthier and smarter ways to live. Sign up for our newsletter and follow us on Facebook , Twitter and Instagram .