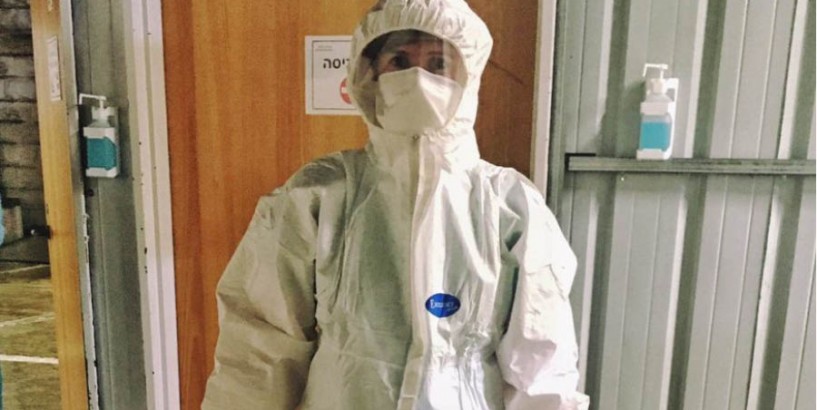 Rachel Gemara When 32-year-old Rachel Gemara volunteered for the new COVID-19 ward in Jerusalem’s Shaare Zedek Medical Center at the end of February, she had no idea what she was getting herself into. At the time, only 15 people had been diagnosed with the novel coronavirus (COVID-19).

“We were being very careful and people were being quarantined,” she said. Her father, a high school principal with no medical background, told her months earlier that what was happening in Wuhan, China, would soon spread throughout the world. But, Gemara said, “I didn’t think it was going to grow.”

Trained as an oncology nurse, Gemara left her own ward to volunteer for the newly formed COVID-19 department. She said unlike in many of the hospitals in Italy, where staff had to be forced to transfer to COVID-19 units, doctors and nurses at Shaare Zedek readily volunteered. “I’m proud to be part of that kind of system,” she said.

The ward has about 40 staff members and can house 20 patients. Within three weeks, however, the staff was told that another ward would be built. As of March 19, Israel had 529 confirmed cases, but the number was ballooning at a rate of about 100 a day. Two were in critical condition. On March 20 Israel reported its first death due to the virus — an 88-year-old man.

The virus’ contagion means that patients are isolated from the health workers. Almost all of the care is done virtually. Patients wear sensors on their chests that constantly monitor their vital signs. The results are broadcast on a screen in a separate room for staff that Gemara refers to as the headquarters. Medications are passed through a special glass door. Occasionally there is a need to go into the room to perform hands-on tasks, but the staff take care not to stay inside for longer than is absolutely necessary. Each patient has a video intercom and most of the care is conducted via video conference. “We’re very grateful for such advanced technology,” Gemara said.

Gemara credits the other patients, those with mild symptoms, as holding down the fort. Empathizing with the nurses’ need to maintain distance, the moderate patients have become surrogate caregivers for the older, more critical ones. “They’re on the inside and we’re on the outside,” Gemara said.The younger patients help the older ones to call their families, readjust their oxygen masks or fluff their pillows. “They’re angels. It’s heartwarming to watch. They feel like they’re a family because they’re so distanced from their real family.”

The absence of family, Gemara said, is the most painful part of the entire situation. One of her patients is an elderly man in critical condition, who may not survive. (Editor’s note: After this article was posted, the man mentioned here is the one who passed away on March 20.) “That they have to end their lives alone is devastating,” she said.

Tiredness seeping into her voice, Gemara admitted she is overwhelmed. “Every time I come in to my shift there are more and more patients.”

Nonetheless, there’s nowhere she’d rather be.

Update: This article has been updated to reflect the 88-year-old man who passed away on March 20 – marking Israel’s first fatality from the virus.