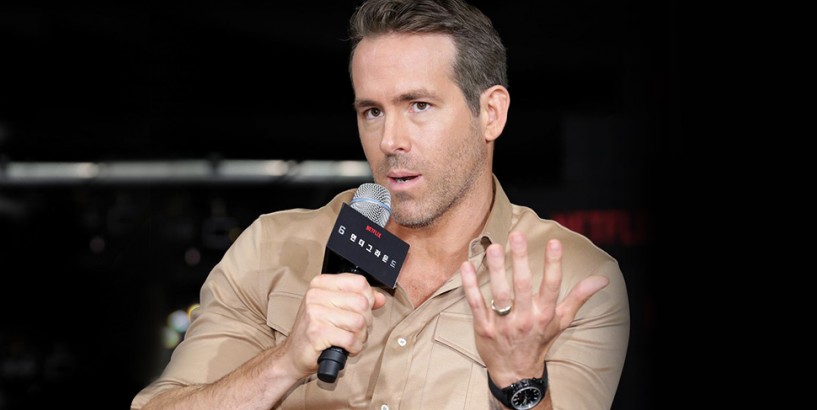 Omega Speedmaster Dark Side of the Moon

Ryan Reynolds: the superhero for our times. It's a well-fitting cape, and one the actor put to good use in Deadpool . And The Green Lantern . And Detective Pikachu (granted, that one just required the voice, giving his all-American rescues-cats-from-trees jawline a well-earned day off). His watch's intentions, though? Well, they're somewhat more ambiguous. Less a superhero, more an alien from one of the more shadowy corners of the galaxy.

During the Seoul premiere of his latest Michael Bay pyrotechnic show, 6 Underground , the 43-year-old debuted an Omega from outer space: the Speedmaster Dark Side Of The Moon. Okay, so while it's not technically born of moon rock and martian synthesis, it is another star in Omega's long and winding fascination with the cosmos. In 1969, the Swiss marque landed the first watch on the Moon, when a Speedmaster ref. 145.012 gracing the wrist of a certain Buzz Aldrin (his mate Neil left his in the whip, sadly). Astronauts on the next five lunar missions all wore Speedys, too.

Photo by ERNEST JONES . To which Reynolds's Speedmaster Moonwatch Co-Axial Chronograph pays tribute. But instead of going all starry-eyed, this particular Omega takes a darker turn, quite literally. It's name relates not to the seminal Pink Floyd album, but rather, the actual dark side of the moon, which is mirrored in the piece's black-on-black design, plus all the functionality you'd expect from a watch built for space travel: a case, dial and bezel made from durable zirconium oxide ceramic, and a rigorously tested chronograph that will keep tracking time long after your phone's run out of battery. Because in space, no one can hear you scream about the lack of USB ports.

This precision comes courtesy of impressive innards. The movement within, a Co-Axial Calibre 9300, is at the cutting edge of timekeeping: the Contrôle Officiel Suisse des Chronomètres, the official body that sets accuracy standards, likes Omega very much. What's more, there's a sizeable power reserve of 60 hours, which means less time spent winding the thing up, and you can see it all in motion via an open caseback. Seeing is believing, and all that.

And if you've designs on visiting the far side of the Earth's natural satellite, know that Omega may be the closest you get. China is the only country thus far that's successfully achieved it, when it made a soft landing in January. There's still a lot out there we don't know. If the dark side is as beautifully menacing as Ryan Reynolds's watch, perhaps that's a good thing.

This story originally appeared on Esquire.co.uk. Minor edits have been made by the Esquiremag.ph editors.