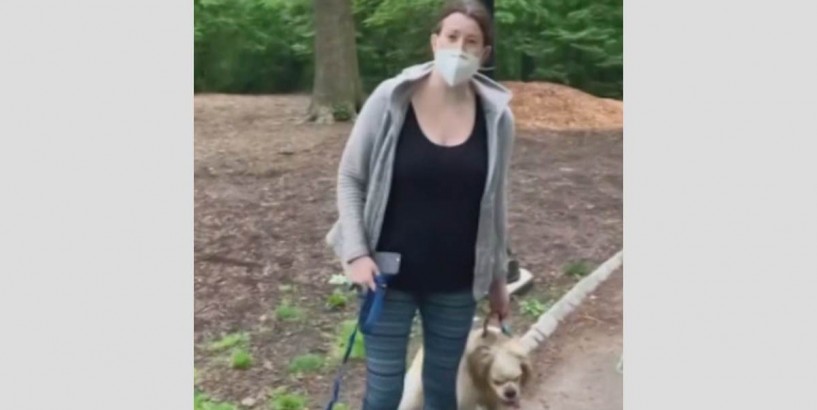 Some New York City officials are urging police to launch a criminal probe into a white woman's calling 911 on a black man in Central Park and falsely reporting that he threatened her. "We could arrest someone for pulling a fire alarm," Brooklyn Borough President Eric Adams said at a news conference Wednesday. "We could surely arrest someone for attempting to destroy and burn down the life of an innocent person."

The news conference was held in the Ramble, a secluded section of Central Park popular with birdwatchers and the site of the confrontation between Amy Cooper and Christian Cooper, who are not related.

The dispute Monday morning began when Christian Cooper noticed Amy Cooper had let her cocker spaniel off its leash against the rules in the Ramble, he has recounted. He said he asked her to put her dog on a leash. When she did not, he pulled out his phone and began recording.

What he captured would be witnessed by tens of millions of people: Amy Cooper called police to report she was being threatened by "an African American man."

Oh, when Karens take a walk with their dogs off leash in the famous Bramble in NY’s Central Park, where it is clearly posted on signs that dogs MUST be leashed at all times, and someone like my brother (an avid birder) politely asks her to put her dog on the leash. pic.twitter.com/3YnzuATsDm

— Melody Cooper (@melodyMcooper) May 25, 2020 The video was posted on Facebook by Christian Cooper and on Twitter by his sister. It sparked accusations of racism and led to Amy Cooper's getting fired from her finance job . She also surrendered her dog to the shelter where she had gotten it.

Amy Cooper is shown in the video telling Christian Cooper to stop recording her or she will call the cops and tell them, "There's an African American man threatening my life." She repeated the statement several times.

Christian Cooper does not appear to move any closer to her in the video. When he refused to stop recording her, Amy Cooper grabs her dog's collar and moves away from him to call the police, the video shows.

"There is an African American man. I am in Central Park. He is recording me and threatening myself and my dog," she said on the call. "Please send the cops immediately!"

Christian Cooper said he stopped recording once Amy Cooper put a leash on her dog.

Police said by the time they responded, both Amy Cooper and Christian Cooper were gone.

Adams, a retired New York Police Department captain, said he believes there should be "zero tolerance" when someone makes a racially motivated 911 call with false accusations.

The Morning Rundown Get a head start on the morning's top stories.

"I am calling on the [NYPD] commissioner to send detectives to the victim's house to look at the tape," Adams said.

"Then the next stop is to send those detectives to Amy's house and put her in handcuffs to send a strong message that you will not use the police department to go after individuals," he continued.

Adams and other officials took issue with NYPD First Deputy Commissioner Benjamin Tucker's telling WPIX 11 on Tuesday that the department had "bigger fish to fry" and would not pursue criminal charges against Amy Cooper for making a false report. Tucker said, "The DA would never prosecute that," referring to the district attorney.

Danny Frost, spokesman for the Manhattan District Attorney's Office, in a statement Wednesday said, "Our office is thoroughly reviewing this matter."

A police spokesperson, Det. Denise Moroney, said Thursday, "We have been in the process of reviewing the incident."

Moroney said the department has been in touch with the Manhattan district attorney and "will go where the evidence leads."

The city's public advocate, Jumaane Williams, said at Wednesday's news conference: "There is no bigger fish to fry than the institution of racism and bigotry that is pervasive in every damn institution across this city, state and this country."

"She called the police BECAUSE he was a Black man. Even though she was the one breaking the rules," the mayor tweeted Tuesday. "She decided he was the criminal and we know why. This kind of hatred has no place in our city."

The mayor said at a news conference Thursday that, "There's a very valid question about calling the police for any false claim of a crime. And I don’t know the law, but that’s the direction I would look at. Did she commit an offense by falsely accusing someone?"

He added that if laws do not cover such incidents, "then I think the notion of creating a new category would make sense."

On Wednesday morning, the city's Commission on Human Rights said it was launching an investigation, which could lead to fines, compensatory damages and community service orders .

"At a time when the devastating impacts of racism in Black communities have been made so painfully clear — from racial disparities in COVID-19 outcomes to harassment of essential workers on the frontlines — it is appalling to see these types of ugly threats directed at one New Yorker by another," Sapna V. Raj, deputy commissioner of the law enforcement bureau at the commission said in a statement.

"Efforts to intimidate Black people by threatening to call law enforcement draw on a long, violent and painful history, and they are unacceptable," the statement said. "We encourage Ms. Cooper to cooperate with the Commission and meaningfully engage in a process to address the harm that she has caused."

"Before anyone dismisses the risks of calling law enforcement on a black man, they should look to Minneapolis on Monday, to Staten Island six years ago, to the many incidents that we see on video and the countless that we don't," he said.

Amy Cooper apologized for her behavior on Monday, saying she reacted "emotionally and made false assumptions" about Christian Cooper's intentions.

"When I think about the police, I'm such a blessed person. I've come to realize especially today that I think of [the police] as a protection agency, and unfortunately, this has caused me to realize that there are so many people in this country that don’t have that luxury," she said.

Christian Cooper has shown empathy for Amy Cooper in interviews since the incident.

"I don't wish her ill, and I hope she ... gets to do the work she needs to do to confront why she took the particular turn in that incident that she did," he told NBC News on Tuesday.

Asked if he has accepted her apology, he said he has if it is sincere and she is willing to keep her dog on a leash in the Ramble.

"She's clearly got some issues that she's going to have to address and do some reflection and ... confront some underlying attitudes of her own," he said.