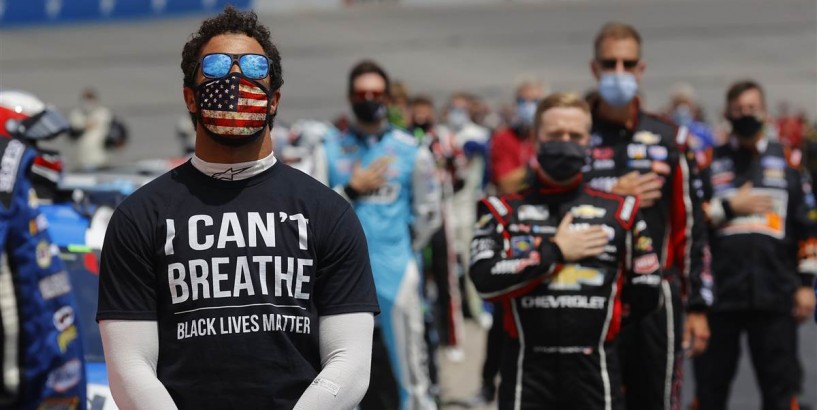 Noose found in Bubba Wallace's garage stall, NASCAR says The shocking discovery comes after the racing circuit banned the Confederate flag from events. Bubba Wallace wears a "I Can't Breathe - Black Lives Matter" T-shirt under his fire suit in solidarity with protesters around the world during the national anthem prior to the NASCAR Cup Series Folds of Honor QuikTrip 500 at Atlanta Motor Speedway on June 7, 2020 in Hampton, Ga. Chris Graythen / Getty Images Breaking News Emails June 22, 2020, 4:07 AM UTC / Updated June 22, 2020, 4:22 AM UTC ByDavid K. Li A noose was found in the garage stall of Black stock car racer Bubba Wallace , NASCAR said Sunday, vowing to investigate find out who is responsible. The discovery was made before a postponed race at historic Talladega Superspeedway , about 50 miles east of Birmingham, Alabama, officials said. “We are angry and outraged, and cannot state strongly enough how seriously we take this heinous act," the organization said in a statement. "We have launched an immediate investigation, and will do everything we can to identify the person(s) responsible and eliminate them from the sport." Earlier this month, NASCAR, a bedrock of Southern culture, banned the Confederate flag from all of its events. The stunning action was taken in the wake of George Floyd's death, which has sparked worldwide protests against police brutality and systemic racism . "As we have stated unequivocally, there is no place for racism in NASCAR, and this act only strengthens our resolve to make the sport open and welcoming to all," NASCAR said. The Morning Rundown Get a head start on the morning's top stories. Sign Up — Bubba Wallace (@BubbaWallace) June 22, 2020 Wallace, the only Black driver in NASCAR's top series, has been vocal in recent weeks about stopping racial injustice. Wallace said in a statement Sunday that his act would not deter him. "Today's despicable act of racism and hatred leaves me incredibly saddened and serves as a painful reminder of how much further we have to go as a society and how persistent we must be in the fight against racism," he said. NASCAR's move to ban the Confederate symbol hasn't been embraced by all fans. Earlier in the day, a plane flying over the track dragged a Confederate flag and the message: "Defund NASCAR." As racing resumes with fans, Bubba Wallace prods NASCAR to turn a corner with Confederate flag ban June 15, 2020 07:36 The aerial protest was taking a jab at Black Lives Matter supporters who want cities to divert money from police departments and into other social programs that could prevent crime. Afterward, NASCAR Executive Vice President Steve O'Donnell called the person who paid for the stunt a "jackass." O'Donnell tweeted a picture of a white and black hand shaking. "You won’t see a photo of a jackass flying a flag over the track here...but you will see this...Hope EVERYONE enjoys the race today," O'Donnell wrote. Later, LeBron James tweeted his support for Wallace. "Sickening! @BubbaWallace my brother! Know you don’t stand alone! I’m right here with you as well as every other athlete," James wrote. David K. Li