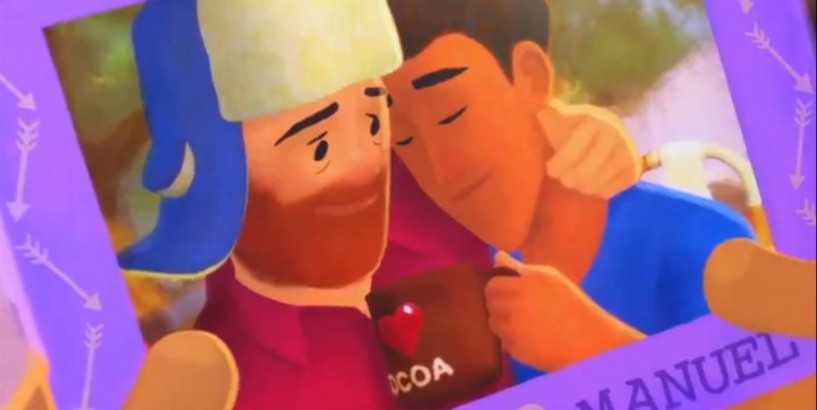 "Out," a short film that features Pixar's first gay main character, was released Friday on Disney+. The film, which is part of the platform's SparkShorts series, follows the story of Greg, whose excitement about moving in with his boyfriend, Manuel, is undercut by his anxiety over not being out to his parents. When Greg's parents come to visit him at his new apartment, Greg tries to hide the evidence of his relationship, but his fairy god-pets, a magical dog and cat, encourage him to tell his parents the truth.

"Out" was directed by Steven Clay Hunter, known for animating "Finding Nemo" and "WALL-E," among other Pixar films. Max Sachar, known for his work on "Coco" and "Toy Story 3" produced the short.

— Disney+ (@disneyplus) May 21, 2020 Walt Disney Studios — the parent of Pixar and a subsidiary of the Walt Disney Company — has lagged behind all other major film studios in terms of on-screen LGBTQ representation since 2012, according to LGBTQ media advocacy group GLAAD. The studio, however, has been stepping up its LGBTQ representation recently by including LGBTQ storylines in films including "Avengers: Endgame" and "Star Wars: The Rise of Skywalker." It also recently made history with "Onward," an animated film that features a lesbian character voiced by Lena Waithe.

A number of upcoming Disney projects are also slated to include LGBTQ characters, including "The Eternals" and "Thor: Love and Thunder." In March, Bob Chapek, CEO of the Walt Disney Company, shut down a critic who claimed that the company is losing money because its products "promote LGBT ideology ." Chapek stated that the company wants "to tell stories that our audience wants to hear that reflects their lives."