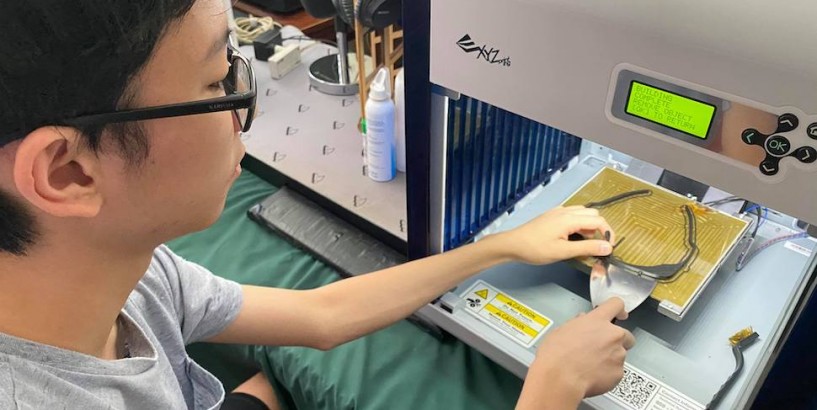 Marcus Chu is making the most out of the lockdown. While most of us are maximizing our Netflix subscription and finally trying to work on those New Year's resolutions, the Grade 10 student, who just turned 16 a week ago, has been printing 3D filaments to use for frontliner's face shields.

Photo by courtesy of Gifford Chu . It started with a Facebook post. His dad showed him an online request from one of his titos asking for 3D filament donations. "He was collecting donations to make face shield masks to donate to frontliners in Ospital ng Makati," Chu told Esquire. Fortunately, he had just gotten a 3D printer for Christmas and he had 3D filaments at his disposal.

"I’ve been trying to ask my dad to get me a 3D printer, but since it was too expensive, he wouldn’t approve. But then I found a Black Friday Sale that sold the 3D printer for a lot less," he said. The decision turned out to be fortuitous.

He started printing face shield frames using an open source design that his tito sent. A sheet of acetate could be attached to the framework to create the shield. "The design is really simple. Collectively, with even at least five printers, I think that around 50+ could be made within 24 hours." Chu admits that his printer is entry-level and he can only produce eight frames in a day, so he encourages other people with 3D printers to take the initiative.

Photo by courtesy of Gifford Chu . Chu still attends school online Monday to Friday and though he admits that the quarantine is a struggle, he remains pragmatic about it: "There’s not much we can do about it right now. I was also glad that Tito Erik gave me the chance to help out during this crisis."

Get the latest stories on COVID-19. All you need to know from your trusted Summit Media network. Sign up here for regular updates delivered to your mailbox. The email address you entered is invalid. Thank you for signing up. We'll send updates directly to your inbox!