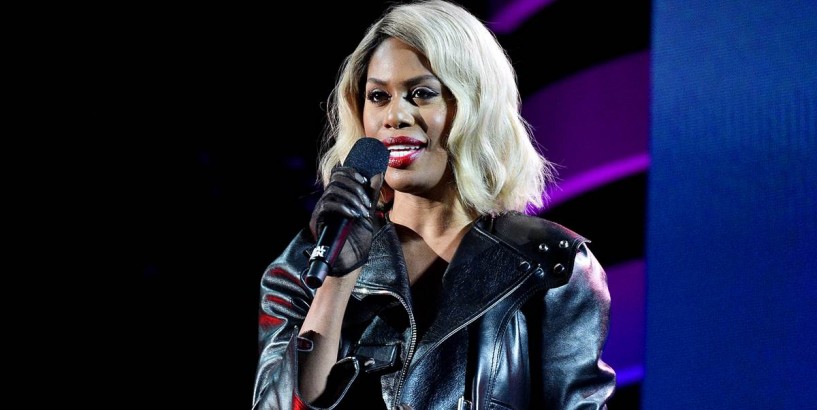 Laverne Cox on Black transgender lives: 'We cannot leave anyone behind'

Laverne Cox opened up to Al Roker about the experience of being Black and transgender in America today and the intersectionality of those identities. "I think it's really important that in all of our movements for social justice we cannot leave anyone behind," the actress and activist said during their conversation Thursday on the 3rd hour of TODAY.

The 48-year-old serves as an executive producer on the new Netflix documentary "Disclosure," which shines a light on the portrayal of transgender people in film and television over the past century. In discussion with Al, she reflects on how the film's release, pegged to Pride Month, also coincides with the massive movement protesting racial injustice, specifically demonstrations sparked by the recent killings of two Black trans women: Riah Milton in Ohio and Dominique “Rem’mie” Fells in Pennsylvania.

Related NBC OUT NBC OUT Rally for Black trans lives draws enormous crowd in Brooklyn So far in 2020, the Human Rights Campaign says at least 16 transgender or gender-nonconforming people have been fatally shot or killed by other violent means. Many times this number is a low estimate, since these cases are often misreported or not reported at all.

According to the HRC, transgender women of color — particularly Black trans women — are disproportionately affected by fatal violence, impacted by the intersections of racism, sexism, homophobia and transphobia.

Get a head start on the morning's top stories.

The issues facing trans people are often erased or minimized from within power structures, including the news media and the broader Black Lives Matter movement . The recent fatal police shooting of Tony McDade , a Black transgender man in Florida, had brought this to the forefront.

"Throughout the protests the stories Black trans people who were victims of police violence, like Tony McDade, got lost in the larger conversation around Black Lives Matter," Nicole Cardoza wrote in the newsletter Anti-Racism Daily . “Centering those that are most vulnerable is critically important in movement work, because a specific community’s distinct pain can be minimized when lumped in with others.”

"When we say all Black lives matter, we mean ALL," Black Visions Collective, a Minneapolis-based advocacy group working for racial justice, tweeted as a response to McDade's killing.

Related NBC OUT NBC OUT Nonbinary artist Alok Vaid-Menon says 2020 marks new era for LGBTQ movement In her conversation with Al, Cox spoke about how the documentary highlights the way trans narratives in media have been harmfully constructed around problematic stereotypes, further stigmatizing public perception of an already marginalized community.

"The history of cinema and trans people, we were there from the very beginning. We look at through the memories of all trans people on screen, how those representations affect the ways in which we see ourselves and how other folks see us," Cox explained.

"I think it's important to note that 80 percent of Americans, according to GLAAD , report not personally knowing someone who's trans. So the information that folks get about trans people in the media is what most Americans will have. For our community, media representations are so much more crucial."

And while "Disclosure" focuses on trans narratives, race is brought up often to highlight further myopic and harmful depictions. Cox spoke with Al about the erasure of Phillip Devine in the Oscar-winning film "Boys Don't Cry." Based on a true story, the fictionalized account of the 1993 death of Brandon Teena, a transgender man in Nebraska, neglected to include Devine, a disabled Black man who was also murdered the same night as Teena.

Related NBC OUT NBC OUT Best Black queer books, according to Black LGBTQ leaders "Our film (is) so intersectional," Cox explained. "We look at the way race and gender constantly intersect in the history of film."

Cox Quote: d the acclaimed lecturer Brene Brown to shine a light on why storytelling is crucial to fighting racism and transphobia in today's society.

"She says about story, 'When we deny our story, the story defines us. When we own the story, we can write a brave new ending,'" Cox said. "With trans folks and sexism and certainly around race in America, we haven't fully owned the story yet. There are so many people who are in denial of the legacy of slavery, Jim Crow, mass incarceration of the lives of Black folks."

"I think 'story' has the possibility to do that. That is why I love doing what I do."