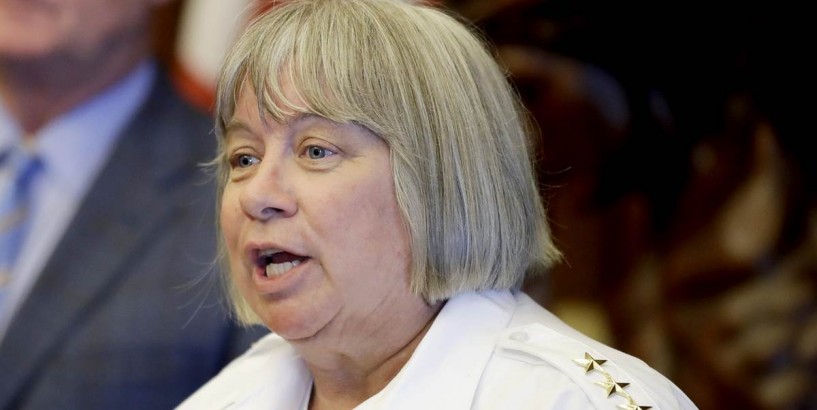 The picture of Christine Coulter from the 1990s shows her wearing a T-shirt with the slogan “L.A.P.D. We Treat You Like a King.”Philadelphia's interim Police Commissioner, Christine Coulter, apologized Tuesday for wearing a T-shirt in the 1990s that appeared to mock the brutal beating of Rodney King. “It is clear it was a bad decision on my part and I would not wear that shirt today," Coulter said at a City Council meeting .

Coulter came under scrutiny last month after The Philadelphia Inquirer published a photo, given to the newspaper by a source requesting anonymity, of her in the early '90s at the Jersey Shore wearing a T-shirt that read: "L.A.P.D. We Treat You Like A King."

Vendors in Los Angeles sold T-shirts with that slogan in the wake of the 1991 videotaped beating of King by Los Angeles police officers. Coulter was an officer in the Philadelphia Police Department at the time.

Coulter told the Inquirer she was "frustrated that someone wanted to take what’s arguably a picture of me and two old friends and turn it into something, you know, ugly or mean-spirited.”

"It may have meant something to people in L.A. ... I can’t remember giving it a thought," Coulter said. "But I certainly can’t say I thought it meant Rodney King."

When the four city police officers accused of beating King were acquitted, riots broke out. The riots left more than 50 dead, thousands injured and caused more than $1 billion in damage.

Longtime Philadelphia community activist Bilal Qayyum said last week that the photo would prevent Coulter from winning over African Americans with her policies.

“For her to have worn that T-shirt shows her mindset about her insensitivity to the black community,” Qayyum told The Philadelphia Tribune . “There’s no way in the world the mayor should be accepting her as our police commissioner.”

Coulter was named the acting top cop after the city's police commissioner, Richard Ross Jr., abruptly resigned last month , following what the Philadelphia mayor described as a failure to stop harassment and discrimination in the department.

“New allegations of sexual harassment as well as gender and racial discrimination among the rank and file have recently been brought to my attention,” Mayor Jim Kenney said in a statement on Aug. 20. “While those allegations do not accuse Commissioner Ross of harassment, I do ultimately believe his resignation is in the best interest of the department.”

In July, Ross said 13 officers would be fired over racist or offensive Facebook posts.

The 13 are among 72 officers in the city who had been placed on administrative duty after the Plain View Project , an online database, shared more than 5,000 Facebook posts and comments in June by current and former law enforcement officers in Philadelphia and seven other jurisdictions around the country.

Some of the posts were deemed racist or anti-Muslim. Others advocated violence or were homophobic.

On Monday, the mayor said the city had launched a survey for residents to weigh in on its search for a new police commissioner. Neither Coulter nor the mayor immediately returned requests for comment.