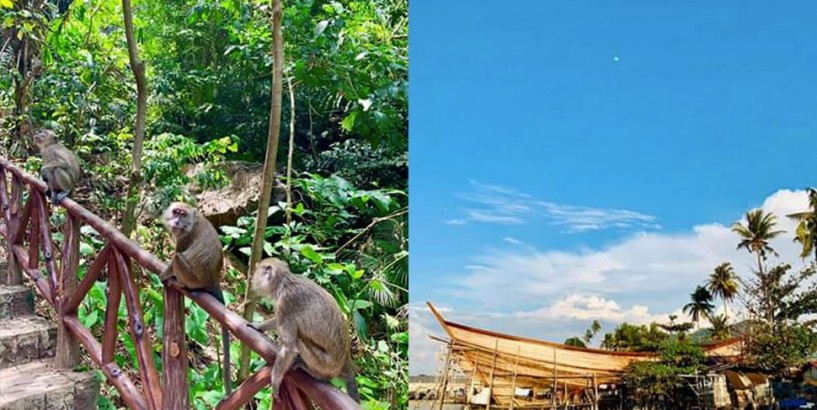 How to Travel to Tawi-Tawi

We’ve all heard about how beautiful Southern Mindanao is, but there is always a misinformed caveat about traveling there — that it is not safe for tourists. The image of Mindanao outside of Davao is summed up by the published images of a yet-to-be-rebuilt Marawi. This is unfortunate, since the entire island of Mindanao has a lot to offer in its beautiful beaches, mountainscapes, and colorful culture.

This is why the announcement, made at the recent Philippine Travel Mart (PTM), about tour packages linking Zamboanga and Tawi-Tawi was met with much excitement by those who have long had the island province on their bucket lists.

Photo by Ramon Figurasin MariÃ±as . Trip highlights Touring Tawi-Tawi has been a pipe dream for many explorers for years, because organized tours are few and far between. With the new packages offered by the Philippine Tour Operators Association (PhilTOA), which organizes the yearly PTM, Tawi-Tawi has become more accessible to more people.

PhilTOA president Cesar Cruz is the first to vouch for the safety of travelers, saying that the tours are coordinated with the LGUs in both Zamboanga and Tawi-Tawi. “The BARMM is very supportive of this project because they want to proudly show off the beauty of Tawi-Tawi,” he explains. As the main agency for tour operators, it makes sure that each local tour destination has ample accommodations and facilities, along with unique travel experiences, before it crafts tourist packages. Needless to say, it believes that Tawi-Tawi is ready.

Among the experiences and destinations included in a Zamboanga-to-Tawi-Tawi tour is a visit to Zamboanga’s historic spots such as Fort Pilar, where one can pay homage to the iconic Lady of Pilar that stands guard over the centuries-old battlements. Other highlights include an outrigger boat ride to Grande Sta. Cruz Island, which is known for its unique pink sand beach, and a sparkling lagoon hidden by thick mangrove forests.

The highest point on the island rises majestically to an elevation of 342 meters, with six limestone pillars that serve as its peaks. Here, one can find a sacred mountain cliff that locals hike up to for blessings. They pray at its Muslim shrines for thanksgiving and many believe that it has the power to heal people of sickness and cleanse them of their sins. A hike to the peak takes about an hour and it includes encounters with the macaques (monkeys), which are considered to be the holy custodians of the mountain. Reaching the peak is rewarded with a breathtaking panoramic view of the island and its surrounding islets.

Photo by Ramon Figurasin MariÃ±as . Community interaction One of the aspects of a PhilTOA tour is community engagement, and the Tawi-Tawi itinerary offers a glimpse into the rich culture of our Mindanaoan brothers and sisters. Another destination, the Badjao village of Luuk Banca is a community of stilt houses built on the seashore. It offers the Badjaos easy access to their main source of livelihood, the sea.

Meanwhile, a trip to the wet market in Bongao uncovers a myriad of seafood choices, freshly caught, along with the local produce in the area. Bongao also serves as the major gateway to the other islands in the province, as well as Malaysia. Take a photo at the docks as goods are unlodaded and passengers disembark from colorful seagoing wooden vessels.

A boat ride aboard a lepa or houseboat can also be arranged to cross the Bongao Channel and catch the beautiful sunset. The ride ends at the Mindanao State University - Tawi Tawi College of Technology and Oceanography (MSU-TCTO).

Simunul Island, which is considered as one of the smallest inhabited islands in the country and dubbed as the cradle of Islamic faith in the Philippines, is also part of the tour. The island is home to the first mosque built in the country by Sheik Makhmud, an Arab missionary, in 1380. Considered as the most significant piece of architecture in Simunul, the mosque still stands today with four of its original ipil-ipil pillars.

Photo by Ramon Figurasin MariÃ±as . Philippines first The Tawi-Tawi tour, as with all the other tours by the PhilTOA across the Philippines, is designed to bridge cultures, bring about a better understanding of our Filipino heritage, and highlight the wonderful discoveries and experiences one can have in our own country. The other new tour packages that were introduced at the Philippine Travel Mart were a Palawan stay, where one can maximize the island’s attractions as it connects El Nido, San Vicente, and Puerto Princesa and a Camiguin sunrise-to-sunset tour that offers activities that range from sea to terrain.

One of the advantages of booking with a PhilTOA member tour operator, says Cruz, is that you can be sure of its legitimacy. “There are many tour groups now posting on social media but you are not assured of how they run their operations, or if they are even legitimate. Our PhilTOA member agencies are accredited by the Department of Tourism and we make sure that we look into the details of the itineraries we offer, conduct research on the area, and even experience it for ourselves through linkages with the DOT’s local offices. We do these so we can ensure that our guests will have a good and safe experience when they travel.”

For Cruz, the Philippines, one of the most beautifully diverse places in the world with a mix of traditions in its culture and cuisine, is just waiting to be explored: “Before we travel to other countries, let us appreciate all the natural wonders we have here, and it will really make you proud to be a Filipino.”

For more information about the PhilTOA, its members and their tour products, visit philtoa.com and its Facebook page .