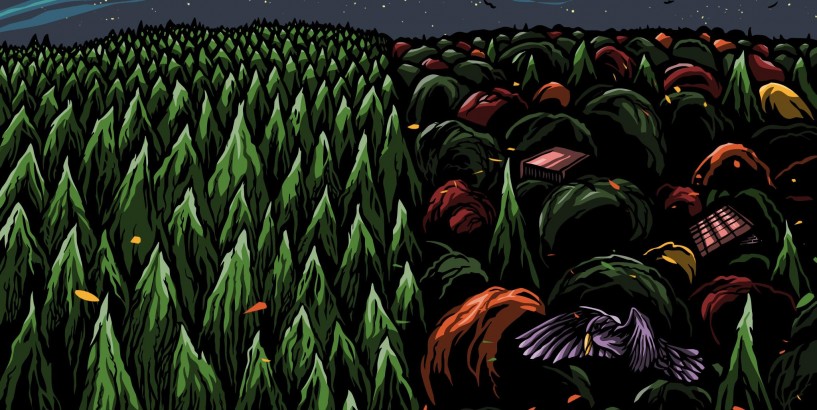 Greek salad and society: diversity is what makes it great

A few weeks ago I was on the Greek island of Santorini, which people think is Italian because they have been auditorily brainwashed by tortellini, linguine and fettuccine. But it isn’t, it’s Greek.

My good woman and I roomed in Pyrgos, the charming town up from the port: you would do well to escape there once you’ve worked out that the albeit spectacular views of the volcanic caldera are finite compensation for the touristic overwhelm of Oia, that dense cluster of shining whitewashed buildings ridging the island’s northern promontory like an octogenarian’s mohican.

Our hotel was staffed by two men, both called Thanos, and I photographed them to reassure my Avengers -crazed children back home that we were in no danger of cosmic annihilation. Thanos #1 was very open with us about his headaches, and what Thanos #2 lacked in English he made up for with a smile so hospitably broad that I feared that the corners of his mouth might meet behind his head and somehow pop him inside out. We’ll tell you what’s true. You can form your own view.

On the morning of our departure we took breakfast at Penelope’s cafe. The paper place mats were printed with romantic paragraphs extolling the virtue of philotimo – an abstract concept that all Greeks understand, encompassing loosely pride in self, pride in family, pride in community, and doing the right thing – a sort of easy, upright moral grace. I took the bait and initiated a conversation with the cafe owner – she bemoaned the subtle ebbing of this value that she sees in Greek society. The economic barrel over which Europe holds Greece is Thatcherising the people, making the young more individualistic, making them forget their philotimo . Read more Best August holiday deals, from Greece to Iceland

I thought about culture and character and how they are slow-cooked into a population, merging with and flavouring the minds of the individuals. Greek grace certainly seemed worth preserving – even with the pasty tourists foisted on them by economic necessity, their warmth is effortless. There is nothing aloof in their desire to preserve that national character. What a contrast from our homegrown cultural conservatism, which currently snarls so stupidly at our guests, like an embarrassing dog.

In his documentary Bowling for Columbine , tragically relevant for the umpteenth time this month, Michael Moore interviewed actor and NRA spokesman Charlton Heston and asked him why he thought Canadians shoot each other much less often than Americans, though they are a hunting nation and most have guns. Heston, seemingly addressing the issue for the first time, ascribed America’s violence vaguely to its history – and when pressed, to its being more ethnically mixed. It wasn’t an ideological statement, it was just the first idea that suggested itself to an old man with a resonant baritone and no information.

In Britain too it has been easy for those on the right to frame multiculture for society’s ills. And it is so easy for the left to sneer at monoculture – I certainly enjoy it. But a monoculture is just what you call a culture when it meets another culture – competitive monocultures have been the norm for most of human history, you can’t just start hating them.

Monoculture is certainly the problem if you want to avoid blandness. If you want to avoid conflict, the problem is two monocultures – and while some are beyond the pale in their reactionary hostility to immigration, it is also unhelpful when others start squawking every time someone wants to discuss whether or not two cultures will, in and of themselves, coalesce peacefully into a multiculture. Sometimes they will and sometimes they won’t. In parts of the midlands, say, I have truly felt a relaxed, colourblind multiculturalism . While in parts of the north, say, people can cheerfully but sincerely hate the town 15 minutes away.

Common sense suggests that the difference is resources: where life is tougher, human groups shrink to a more sustainable size by actively seeking criteria to exclude. That could be solved economically. But it also comes down to regional character. Many in the north have a proud sense of place and people – you ask a lot when you ask them to give that up. People in the midlands tend to be less passionate, not just than people in the north, but than a flannel – and their agreeability is not automatically meritorious.

But what is the answer to a clash of monocultures? Apartheid is a quick fix and appeals again and again to lazy, frightened people. Diversity is hard work and can be abrasive at first – but it really is worth it. And demonstrably. Watch more