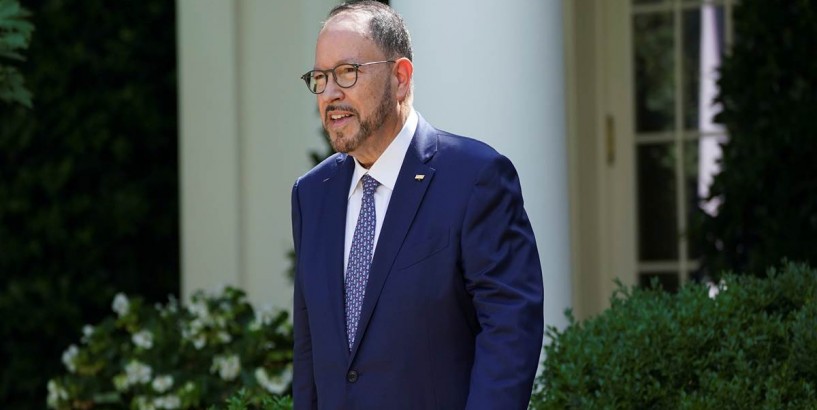 Goya CEO's Trump comments led Latinos to call for a boycott. That Goya was surprised says a lot.

Goya Foods CEO Bob Unanue might be regretting his Rose Garden endorsement of a president he called a "blessed" leader . His remarks at a Thursday White House event where President Donald Trump hosted a group of Hispanic supporters came at a time when U.S. Latinos are facing disproportionate effects from COVID-19 and experiencing a 14.5 percent unemployment rate . He certainly struck a chord with Latinos — but not the one he or Trump hoped for. Instead, his comments were met with massive calls to boycott Goya , the iconic, mostly East Coast Latino food brand that has been both a staple and a nutritional pariah for the country’s largest nonwhite population.

Goya Foods CEO: We are 'truly blessed' to have a leader like Trump July 9, 2020 01:57 As Unanue’s comments, so disconnected from the reality of so many Latinos in America, sparked an outcry, the question really is why the head of one of the richest Spanish-American families would be willing to risk his company’s future by siding with this president, of all presidents. After all, Trump began his campaign in 2015 with racist comments about Latino immigrants : "When Mexico sends its people, they’re not sending their best," he said. "They’re sending people that have lots of problems, and they’re bringing those problems with us. They’re bringing drugs. They’re bringing crime. They’re rapists." And, less well reported, he added: "It’s coming from more than Mexico. It’s coming from all over South and Latin America."

That's basically the heritage of Goya's entire customer base.

Related Opinion Opinion As a Latino, I no longer feel safe in Trump's America. So I'm leaving it. And Trump continues to disparage Latinos — at least Latinos who don’t agree with him politically. So why would Unanue want to become part of that story, let alone allow Goya to become part of the story?

Well, as a long-time supporter of Republican candidates , Unanue has had no problem shunning his grandfather’s Puerto Rican migrant roots by playing up his family’s Spanish and European ones — as though the quest for white acceptance is something noble to achieve in these times.

The Family Behind the 80-year Success of Goya Foods Oct. 17, 2016 04:23 Plus, those who have been following Goya already know it has a tendency to step away from more progressive political causes, such as its decision in 2017 to stop sponsoring the National Puerto Rican Day Parade , which was planning to honor Puerto Rican nationalist Oscar López Rivera . In 2013, the company had to offer a weak apology for slapping a large, tacky Goya logo on a statue in the Bronx, New York City, honoring baseball legend Roberto Clemente. The situation sparked cries that all the company really cared about was commodifying Latino heritage — not celebrating it.

Still, Goya never saw the response to Unanue's remarks coming and is still reeling: Press calls to the company are going unreturned, and its official response to the news, announced Friday on Twitter , is that the brand is working hard for the “prosperity & education of our country.”

Related Opinion Opinion Spanish, not English, is the most all-American language What has clearly emerged from this debacle is how the company has actually always been out of touch with the community it says it serves.

To many, Goya is home — part of a Puerto Rican or a Caribbean or a Latin American identity that has spanned generations. It is, at least in their marketing, the food of the “new arrival,” trying to make it in a new country without losing the flavors of their heritage.

La Playa market, olives and canned seafood Goya display in Miami on Feb 17, 2018. Jeff Greenberg / Universal Images Group via Getty Images file The truth, of course, is somewhat more complicated: Goya sells ultra-cheap foodstuffs often filled with sodium and other preservatives, telling us, in effect, that our "heritage" is chemicalized and dangerous, when little is further from the truth. The unhealthiness of sodium and preservative-filled foods (which are cheaper to manufacture, package, transport and sell in mass quantities without losing any to spoilage than foods without those ingredients) is part of what leads many to say that Latino cuisine — and thus Latinos — are inherently unhealthy.

But the true food ways of the myriad cultures of Central and South America and the Caribbean don't come in a plastic bottle filled with MSG; huge, often white-owned corporations just told us they did, just as the colonizers who preceded them often determined what we were allowed to eat.

Still, Goya created a community that was deeply loyal to its products because of the myth in a majority-white America that they were "ours" and therefore also saw the company as a cultural institution; that is why the backlash has been so raw. Unanue, and Goya, misread how his words at that White House would affect the mythology the brand has spent years building and underestimated the deep connection — whether good or bad — that Goya has to the world of Latinidad in the United States.

It’s almost as if this white Spanish family never really saw U.S. Latinos as a community they served, rather than one they marketed to and profited off of.

Unanue, though, clearly chose Trump over the community, and, in doing so, it’s as if Goya itself has chosen loyal white Trump supporters — many of whom would not know the difference between adobo and adobe — over loyal Latino customers.

The Goya debacle is yet another example of how, even in the Latino community, there will be those who always choose a potential path to power over the community that set them on that path at all. This probably won't be the end of Goya, boycott or not — fairy tales still hold a certain amount of cultural power, even when we know they aren't real.

But now for many consumers, "Si es Goya" no longer ends with "tiene que ser bueno." Instead, "Si es Goya" ends with an aversion to defending our community in front of a president who repeatedly insults us. On that, Unanue and Goya delivered.

As a Latino, I no longer feel safe in Trump's America. So I'm leaving it. Spanish, not English, is the most all-American language Latinos have to be superheroes: We do everything else in America CORRECTION (July 11, 2020 6:42 p.m. ET): A previous version of this article misstated the Latino unemployment rate. It is 14.5 percent, not 27 percent (which is the unemployment rate for Latinos 16-19 years old).