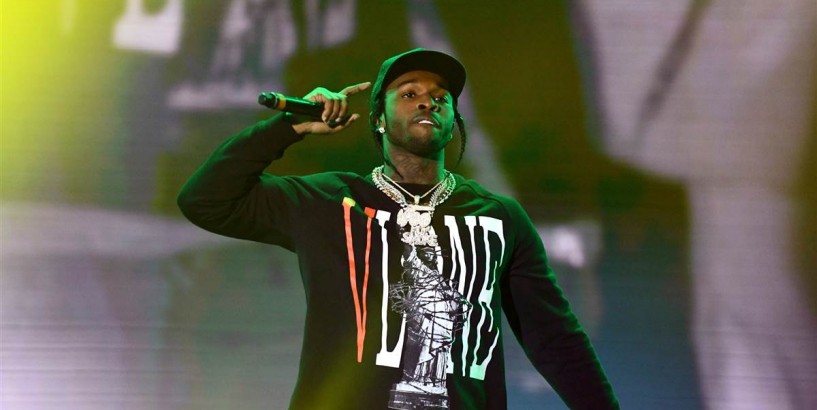 U.S. news Four charged with murder of rapper Pop Smoke Pop Smoke was killed in February during a robbery at the Hollywood Hills home where he was staying while visiting Los Angeles, officials said. Rapper Pop Smoke performs onstage during day 2 of the Rolling Loud Festival at Banc of California Stadium in Los Angeles on Dec. 15, 2019. Scott Dudelson / Getty Images file Breaking News Emails July 14, 2020, 1:32 AM UTC ByPhil Helsel Four people, including two juveniles, were charged Monday with murder in the February killing of Brooklyn rapper Pop Smoke during a robbery in Los Angeles, prosecutors said. Corey Walker, 19, and Keandre Rodgers, 18, were the only two named by the Los Angeles County District Attorney's Office. They are charged with murder with the special circumstance allegation that the murder occurred during the commission of a robbery and a burglary, which makes them eligible for the death penalty, the district attorney's office said in a statement . A decision on whether to seek it will be made at a later date, the office said. Two others, ages 17 and 15, have also been charged with one count of murder and robbery, according to the office, but were not identified. Pop Smoke, 20, whose legal name is Bashar Barakah Jackson, was killed in the Hollywood Hills short-term rental home where he was staying on the morning of Feb. 19, police have said. Let our news meet your inbox. The news and stories that matters, delivered weekday mornings. Sign Up This site is protected by recaptcha Privacy Policy | Terms of Service The LAPD on Thursday announced that five people had been arrested in connection with Brooklyn rapper's shooting, including the four who have since been charged. The fifth person whose arrest last week was announced by the LAPD, Jaquan Murphy, 21, is not currently charged in connection to Pop Smoke's slaying, a spokesman for the district attorney's office said. Murphy, who was being held in jail Monday evening, is charged in an unrelated murder, spokesman Greg Risling said. Online jail records indicate that Murphy was being held in lieu of $1 million bail. It was not immediately clear if he had an attorney who could speak on his behalf. Walker and Rodgers are also being held in lieu of bond, online jail records show. Arraignment was continued until Tuesday, the district attorney's office spokesman said. Pop Smoke collaborated on songs with artists such as Nicki Minaj, JackBoys and Travis Scott. His posthumous album, “Shoot for the Stars Aim for the Moon," was released Friday and was executive produced by rapper 50 Cent . He the son of Panamanian and Jamaican parents and told Genius that the name "Pop Smoke" was born of a combination of "Papa," which his Panamanian grandma used call him, and "Smoke Oh Guap," a nickname his friends gave him. California Gov. Gavin Newsom in March announced a moratorium on the state's death penalty, but prosecutors are still free to seek the penalty. California's last execution was in 2006. When the five people were arrested last week, the LAPD in a statement referenced members of a Los Angeles street gang involved in the murder of Jackson. More details on the connection were not immediately available, but the district attorney's office said that the criminal complaint against Walker and Rodgers "also alleges gang and gun allegations." Phil Helsel