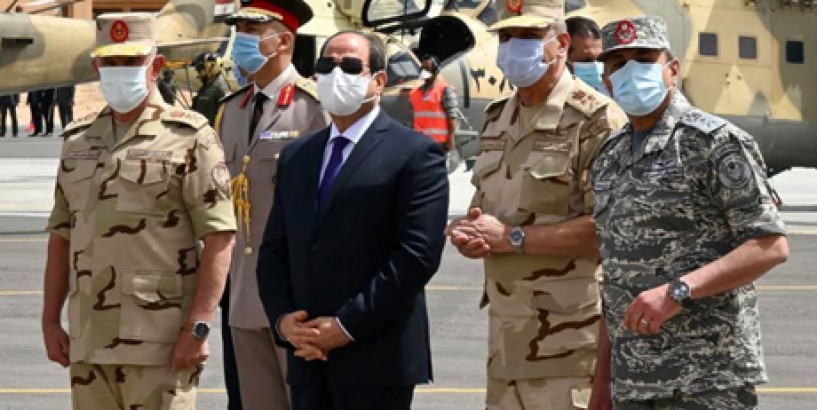 Libya's House of Representatives, which is allied with the eastern-based commander Khalifa Haftar, said on Sunday that it welcomes Egypt's announcement that it may intervene in Libya to assist the Libyan armed forces in their war against terrorism and to counteract the foreign invasion. The Egyptian move comes in response to calls by the Libyan parliament speaker, Libya's House of Representatives said in a statement. Speaker Aguila Saleh made the call when he addressed the Egyptian parliament about the latest development in Libya in January, he said in the statement. On Saturday, Egypt’s President Abdel-Fattah El-Sisi said that any direct Egyptian intervention in Libya would have international legitimacy at this point, while assuring that any intervention would be mainly aimed at protecting Egypt’s western border, achieving a ceasefire, and restoring stability and peace in the country. Saleh said that “El-Sisi's speech comes in response to our call to the Egyptian parliament on the need to intervene and support our armed forces in their war against terrorism and to counter foreign invasion." Saleh expressed his appreciation for the Egyptian president's serious stance and efforts to reach a ceasefire and his call for the Libyan people to stand together to protect their wealth by launching a political dialogue that leads to satisfactory solutions. "Egypt has sought, since the onset of the crisis, to push ahead with the political solution and achieve Libyan homogeneity," he said. “It hosted discussions and meetings at various civilian and military levels, and has been keen to reconcile opinions between the factions and it also participated actively in conferences and meetings in international capitals, especially in the Berlin conference, and supported its outcomes, while others played the role of abettor of the fighting via smuggling weapons and mercenaries to achieve its colonial objectives," he said. “The Egyptian role, during the various stages of the Libyan crisis, has never been to incite hostility or fighting," he said. El-Sisi said that any intervention in Libya by Egyptian forces "would be led by the Libyan tribes," stressing that Egypt only aspires for stability in Libya. The supreme council of Libyan tribes and cities, loyal to the eastern forces, announced on Sunday its support for El-Sisi’s stance, calling for direct Egyptian support for the Libyan armed forces to eliminate chaos and to assist the Libyan people in building state institutions. During his speech, El-Sisi also warned forces loyal to the internationally recognised Government of National Accord (GNA) in Tripoli not to cross the current frontline with Libyan National Army (LNA) forces of rival Haftar in the east, whom Egypt supports. Libya's western-based government said on Sunday that Egypt's announcement would be an attack on its sovereignty and is considered a declaration of war. It added that “the Government of National Accord is the only legitimate representative of the Libyan state.” An Egyptian official source at the Ministry of Foreign Affairs denounced the GNA's statement, saying it reflects a willingness to waste the opportunity once again to put an end to the Libyan crisis and achieve stability and security for the brotherly Libyan people, according to state news agency MENA. No single government has had full control over Libya since 2011 when then-leader Muammar Gaddafi was killed.