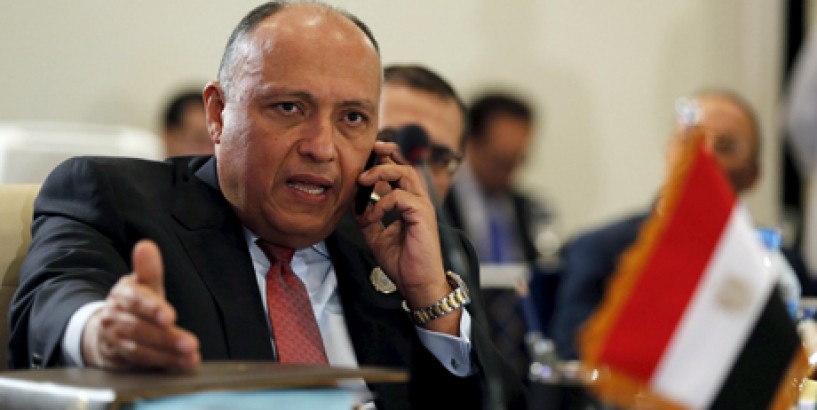 Related Sudan reiterates rejection of Ethiopian dam being filled without an agreement Exclusive: Egypt's letter to UN Security Council on GERD As tensions grow with Ethiopia, Sisi says deal must be reached on GERD Ethiopia to fill disputed dam, deal or no deal: Minister Egypt says dam talks deadlocked as Ethiopia rejects a binding deal US NSC says 'time to get GERD deal done' before Ethiopia starts filling process Egypt-Ethiopia Nile water dispute: A timeline Egypt wants the United Nations Security Council to “undertake its responsibilities” and prevent Ethiopia from starting to fill its massive, newly built hydroelectric dam on the Nile River next month amid a breakdown in negotiations, Egyptian Foreign Minister Sameh Shukry told The Associated Press on Sunday, accusing Ethiopian officials of stoking antagonism between the countries.

Ethiopia announced Friday that it would begin filling the dam’s reservoir in July even after the latest round of talks with Egypt and Sudan failed last week to reach a deal governing how the dam will be filled and operated.

Egypt formally asked the Security Council to intervene in a letter the same day.

“The responsibility of the Security Council is to address a pertinent threat to international peace and security, and certainly the unilateral actions by Ethiopia in this regard would constitute such a threat,” Shukry said in an interview with the AP.

Filling the Grand Ethiopian Renaissance Dam would potentially bring the years-long dispute between Egypt, Sudan and Ethiopia over the $4.6 million mega-project to a critical juncture. Ethiopia said the electricity that will be generated by the dam is a crucial lifeline to bring millions out of poverty. With the start of the rainy season in July bringing more water to the Blue Nile, the Nile’s main tributary, Ethiopia wants to start filling the reservoir.

Egypt, which relies on the Nile for more than 90% of its water supplies, fears a devastating impact if the dam is operated without taking its needs into account. Sudan, which also largely depends on the Nile for water, has been caught between the competing interests.

The United States earlier this year tried to broker a deal, but Ethiopia did not attend the signing meeting in February and accused the Trump administration of siding with Egypt. Last week, the U.S. National Security Council tweeted that “257 million people in east Africa are relying on Ethiopia to show strong leadership, which means striking a fair deal.”

Shukry warned that filling the reservoir without an accord would violate the 2015 declaration of principles governing their talks — and rule out a return to negotiations.

“We are not seeking any coercive action by the Security Council,” he said. In a three-page letter to the council, Egypt asked it to call Ethiopia back into talks for a “fair and balanced solution” and to urge it refrain from unilateral acts, warning that filling the dam without a deal “constitutes a clear and present danger to Egypt” with repercussions that “threaten international peace and security.”

Hanging over the dispute has been the fear it could escalate into military conflict, especially as Egypt — facing what it calls an existential threat — repeatedly hits dead ends in its attempt to strike a deal. Commentators in Egypt’s pro-government media have often called for action to stop Ethiopia. One commentator, Moustafa al-Saeed said in a Facebook post that starting to fill the reservoir would be a “declaration of war” and urged the government to block Ethiopian traffic through the Suez Canal.

Shukry underlined that the Egyptian government has not threatened military action, has sought a political solution, and has worked to convince the Egyptian public that Ethiopia has a right to build the dam to meet its development goals.

“Egypt has never, never over the past six years even made an indirect reference to such possibilities,” he said of military action.

But, he said, if the Security Council cannot bring Ethiopia back into negotiations and filling begins, “we will find ourselves in a situation that we will have to deal with,” he said. “When that time is upon us, we will be very vocal and clear in what action we will take.”

He called on the U.S and other Security Council members, along with African nations, to help reach a deal that “takes into account the interests of all three countries.”

Sticking points in the talks have been how much water Ethiopia will release downstream from the dam if a multi-year drought occurs and how Ethiopia, Egypt and Sudan will resolve any future disputes.

This month, ministers from the three countries held seven days of negotiations by video conference, but talks ended Wednesday with no deal. No date was set for a return to the table.

Ethiopian Foreign Minister Gedu Andargachew told the AP on Friday that filling the dam would begin with the rainy season in July and dismissed the need for an agreement. He accused Egypt of trying to “dictate and control even future developments on our river.”

Egypt’s Shukry on Sunday countered that Ethiopia was backing out of previously agreed-upon points.

“We have on many occasions been flexible and been accommodating. But I can’t say that there is a similar political will on the side of Ethiopia,” he said.

He called Andargachew’s comments “disappointing,” pointing to “the escalation of antagonism that has been intentionally created.” Starting to fill the reservoir now, he said, would demonstrate “a desire to control the flow of the water and have effective sole determination” of the water that reaches Egypt and Sudan.

After the end of talks on Wednesday, Sudan’s irrigation minister said his country and Egypt rejected Ethiopia’s attempts to introduce articles on water sharing in the dam deal. Egypt has received the lion’s share of the Nile’s waters under decades-old agreements dating back to the British colonial era. Eighty-five percent of the Nile’s waters originate in Ethiopia from the Blue Nile.

Shukry said Egypt maintains that an agreement can be achieved, but that it “has to be negotiated in good faith.” He said any future deal on shares of the Nile’s water should take into account that Ethiopia has other water sources besides the Nile.