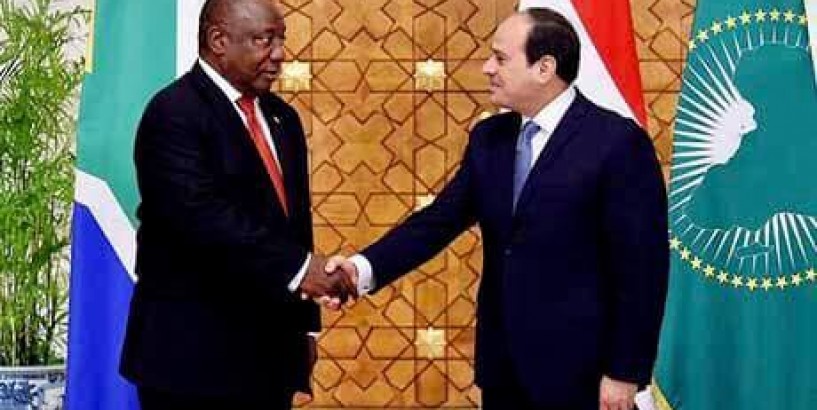 El-Sisi made the statement during a phone call with his South African counterpart Cyril Ramaphosa on Saturday as the two heads of state discussed the disputed Grand Ethiopian Renaissance Dam (GERD).

According to Presidency Spokesman Bassam Rady, El-Sisi said Egypt insists on the formulation of a full-fledged legal agreement between the concerned parties regarding the rules of filling and operation of the dam.

Egypt, Sudan and Ethiopia have been engaged in online talks sponsored by the African Union (AU), which is currently headed by South Africa, for nearly a month to reach an accord over the mega-dam on the Blue Nile.

Over years of negotiations, Ethiopia has always backtracked on signing a binding deal, including during the talks brokered by Washington that faltered in February when Ethiopia didn't show up at the final round of negotiations, and also during Sudan-brokered talks in June that led to Egypt escalating the matter to the United Nations Security Council.

“The Ethiopian government does not look for a binding agreement concerning the current talks about GERD, only a guidelines agreement which can be revised at any time,” Mufti said.

Ethiopia hopes the massive $4.8 billion dam will allow it to become Africa’s largest power exporter. On the other hand, Egypt, which relies on the Blue Nile for 95 percent of its freshwater, fears the dam will diminish its water supply, which is already below scarcity level.

Egypt is not the only party that has repeatedly demanded the agreement be legally binding. Sudan has also raised the same concern at the end of the Khartoum-brokered negotiations that reached deadlock last month, and again in its three-page letter to the United Nations Security Council later in June.

Among the disputed legal terms that Sudan mentioned in its letter is the "binding nature of the agreement." It proposed a draft agreement that "ensured that the agreement to be signed will be legally binding and cannot be amended or terminated without the agreement of all three parties."

However, Sudan's letter said Ethiopia proposed a document of "guidelines" that can be revised and in some cases terminated.

On Thursday Sudanese Prime Minister Abdalla Hamdok stated that reaching a binding agreement on the filling and operation of the GERD is a necessity for paving the way for future cooperation on the Nile.

Rady added in the presidency statement that the El-Sisi and Ramaphosa tackled during their phone call the latest developments on GERD within the framework of what was discussed during the mini-African summit held on Tuesday.

The AU issued a statement on Friday on behalf of its chairman Ramaphosa in which it stressed the heads of state and governments “agreed on the process of finalising negotiations on the text of a binding agreement on the filling and operation of GERD, which includes a comprehensive agreement on future developments on the Blue River.”

The presidential spokesperson added that Ramaphosa expressed during the phone call his aspiration for the continuation of intensive coordination between the two countries on the issue of the $4.8 billion dam to reach a fair and balanced agreement for all parties on this vital issue.

The Egyptian and South African presidents also discussed the latest on Libya, the statement said, as they exchanged viewpoints on how to activate the political settlement negotiations within the framework of the Berlin process and the "Cairo Declaration" initiative in an effort to undermine the dangers of terrorism, extremist militias and external interference that threaten regional security and stability.

The Cairo Declaration is a recent joint political initiative announced last month in Cairo by President El-Sisi, commander of the Libyan National Army Khalifa Haftar, and Libya's parliament speaker Aguila Saleh to resolve the Libyan crisis and end the armed conflict in the Egypt’s western neighbour.

The initiative, which was welcomed by various foreign and Arab countries, mandates an intra-Libyan resolution as a basis for resolving the country’s conflict under resolutions by the UN and past efforts in Paris, Rome, Abu Dhabi, and most recently in Berlin.