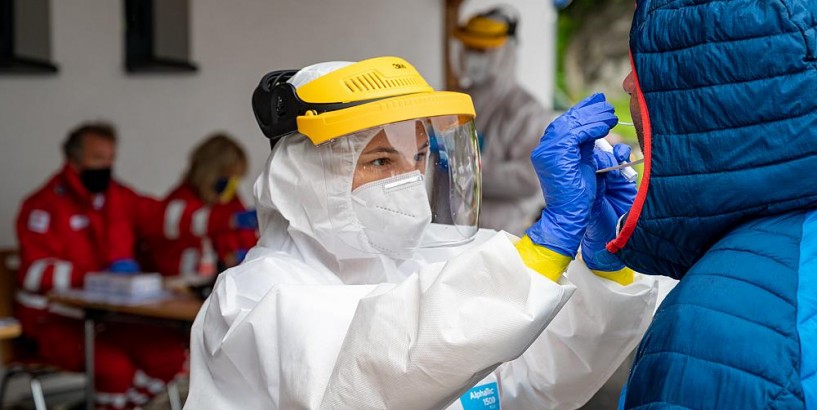 As Spain fights a spike in coronavirus cases, other European countries are grappling with local outbreaks.

An entire farm with 500 people was quarantined in the German state of Bavaria on Sunday after 174 harvest workers tested positive to the virus.

Authorities are confident the outbreak in the town of Mamming, in the Dingolfing-Landau district, have not spread outside the farm.

Infected and non-infected people have now been separated, while a fence has been erected around the farm and patrol guards have been deployed to make sure nobody leaves. Austria

Only a few kilometres away, people in the Austrian resort town of St. Wolfgang, near Salzburg, were urged to stay home after 44 people tested positive for COVID-19 on Friday.

It is believed the infection spread during parties in the town's bars - two of which have now been temporarily closed as a preventive measure. All bars and clubs now have to shut by 11pm.

Austria has reported over 20,000 cases and more than 700 related deaths so far. France

France has so far avoided reinforcing lockdown, but the country's 'R' infection rate grew by a worryingly 1.3 on Saturday. It means that infected people can contaminate 1.3 others on average.

The country's daily infections are also rising, reaching over 1,100 on Friday.

Health authorities have warned France risks taking a backward step in the battle against the virus, which has killed over 30,000 people there, as current infection indicators resemble those seen in May at the end of the strict two-month lockdown.

“We have cancelled much of the progress that we’d achieved in the first weeks of lockdown-easing,” health authorities said, also warning that French citizens appear to be letting their guard down during their summer vacations and that those who test positive are not self-isolating enough.

French authorities recently enforced a €135 fine for people who do not wear face-mask in closed public spaces. Italy

The southern Italian region of Campania will follow suit with a much higher fine, amounting to €1,000.

On top of the fine, businesses could be forced to close for a duration of five to 30 days.

"If our fellow citizens think that the problem is resolved, that means that within a few weeks we will return to a hard emergency", the region's governor Vincenzo De Luca warned on Friday as he announced the move on Facebook .

The measure will apply to anybody not wearing a mask in an enclosed space, including public buildings, supermarkets, bars, restaurants, shops as well as public transport (bus, trains, subways).

Public "transport operators will also have to deny access to passengers who do not wear a mask.

Those who are caught not wearing it onboard will be forced to get off - at the cost of blocking the "bus or train" or even calling the police if they refuse.

Italy is one of Europe's worst-affected countries by the coronavirus pandemic, accounting for over 242,000 cases and more than 35,000 deaths.

The virus however now seems reasonably under control in the country, though it reported 275 new cases in the past 24 hours as well as five deaths. Share this article