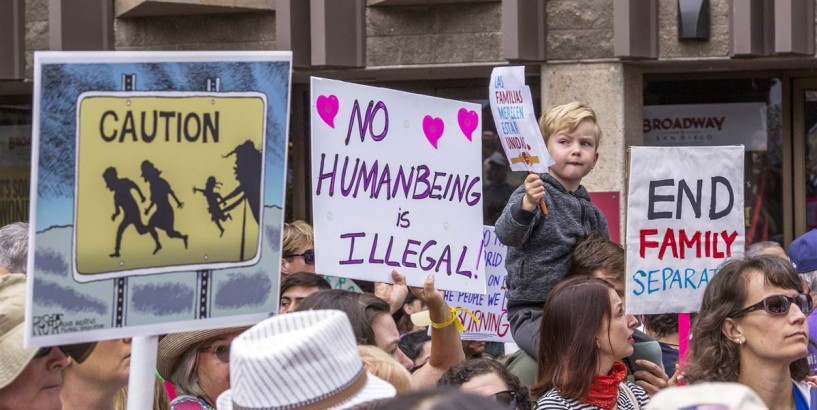 Child deportations surge amid pandemic, but plans to speed them up date to 2017

Immigration Child deportations surge amid pandemic, but plans to speed them up date from 2017 Recent reports from immigration lawyers, DHS officials and congressional staff indicate a rise in rapid deportations of unaccompanied migrant children. Protesters demand that thousands of children taken from their immigrant parents by border officials be reunited on June 23, 2018 in San Diego. David McNew / AFP via Getty Images Breaking News Emails May 20, 2020, 6:31 PM UTC ByJulia Ainsley WASHINGTON — The Trump administration has expedited the deportation of child migrants during the coronavirus pandemic, citing public health, but documents obtained by NBC News show that as far back as 2017, now–DHS Acting Secretary Chad Wolf sought to expedite child deportations in order to discourage Central American asylum seekers. Recent reports from immigration lawyers, DHS officials and congressional staff have indicated a rise in the number of rapid deportations of unaccompanied migrant children. Previously, children who arrived in the U.S. without a parent or legal guardian were given protections under anti-trafficking laws, which included the right to claim asylum and to be placed in the custody of the Department of Health and Human Services until they could be placed with a guardian. The New York Times recently reported that more than 900 children have been deported under a new policy that sends children back to their home countries before they have had a chance to coordinate plans with a guardian at home or claim asylum in the U.S.. Many of those children, according to the Times , were in the U.S. and living in HHS custody or with family members before the pandemic began. Get a head start on the morning's top stories. Sign Up This site is protected by recaptcha Privacy Policy | Terms of Service DHS has said the deportations are justified under Title 42, which allows restrictions on immigration to slow the spread of disease. But a 2017 policy proposal by Wolf shows that the agency has long sought the ability to deport children more quickly, long before the threat of a virus gave it cover to do so. The documents were first obtained by Sen. Jeff Merkley , D.-Ore., and then shared with NBC News. Wolf, who was then chief of staff to DHS Secretary Kirstjen Nielsen, sent a collection of policy ideas to the Justice Department , which included plans to reclassify unaccompanied migrant children as accompanied once they had been placed in the care of a parent or sponsor. Migrant families in ICE detention refuse to separate from children May 19, 2020 04:07 The designation as an unaccompanied child “is recognized throughout the minor’s immigration proceeding, despite the minor’s reunification with parents. This affords the minors the protections under the Trafficking in Victims Protection Reauthorization Act (TVPRA), which allows them to avoid expedited removal [and] to seek asylum,” Wolf said in the internal policy proposal memo. In 2019, shortly before she was removed as secretary, Nielsen wrote a letter to Congress asking for a change in law to allow DHS to remove children more quickly. Congress did not authorize such a move. “DHS seeks authority to return [unaccompanied children] to their families and a safe and orderly manner if they have no legal right to stay,” Nielsen said in a March 2019 letter to Congress, as the number of children crossing the border was on the rise. Related