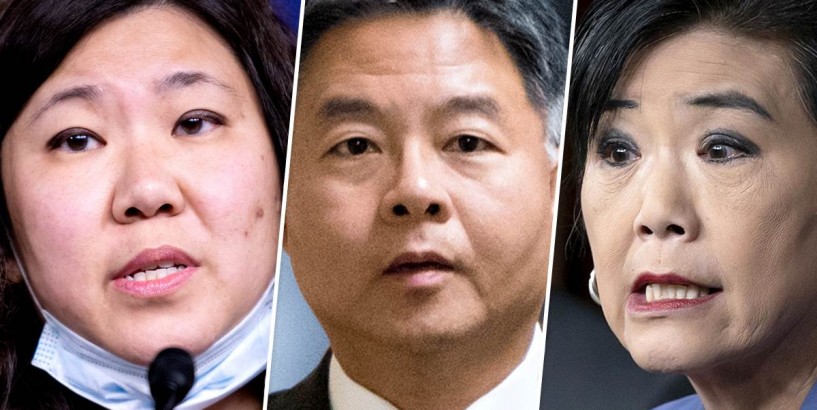 In the wake of George Floyd's killing, many Asian American leaders are pointing out that the drive for real change often fades away. But they're aiming to help prevent that this time around, they say. Several Asian American members of the Congress expressed their intent to push for long-term institutional change long after the protests die down. Though the death of Floyd, a Black man, after then-Minneapolis police officer Derek Chauvin, who is white, dug his knee into Floyd's neck for almost eight minutes in May, ignited calls for racial justice, legislators point out that the movement highlighted existing issues that need continued attention.

“I believe more Americans now understand that there is institutional racism and it’s a reality that affects many minorities in a variety of contexts. You have elected officials working now to try to mitigate the disparate effects of racism,” Rep. Ted Lieu, D-Calif., told NBC Asian America. “There's so many areas where we have to address institutional racism.”

Democratic Rep. Judy Chu, chair of the Congressional Asian Pacific American Caucus (CAPAC), explained that for Asian American lawmakers, allyship on Capitol Hill means utilizing the current nationwide momentum to ensure they don’t let “this moment pass without real change.” Chu noted that she and the other members of the caucus swiftly came out in support of the Justice in Policing Act, legislation introduced by Rep. Karen Bass, chair of the Congressional Black Caucus. The bill would, in part, institute a national registry to compile data and records of police misconduct, lower the criminal intent standard to convict a law enforcement officer for misconduct, and place limits on qualified immunity in private civil action.

“For the George Floyd killing, it wasn’t just one rogue police officer that had his knee on George Floyd’s neck,” Lieu said, adding that three more officers were involved in the death. “You had the Minneapolis Police Department spokesperson that gave an entire misleading account of what initially happened. Then you had ... police officers who knew about Derek Chauvin’s 18 misconduct claims and didn’t take strong enough action."

He added: “So it takes an entire village to do the persistent discrimination against Black Americans in these police encounters, and you've got to reform the system. So that that doesn't keep happening.”

Chu said that CAPAC members will also continue pressing for action through the Tri-Caucus, a congressional group made up of her caucus in addition to the Congressional Black Caucus and the Congressional Hispanic Caucus. The group has worked together to promote legislation including the resolution to denounce coronavirus-related anti-Asian racism. But Chu notes the coalition also serves another important purpose.

“We also work together to lift up all communities of color, not pit one against the other,” she said. “That means we are going to continue to lead by advancing legislation to address inequality and ensure more opportunity for vulnerable communities.”

Meng noted that some of the misunderstandings from Asian Americans come from the lack of education around the plight of the Black community and the centuries of oppression they have been forced to confront. She said that in her district, she’s met first-generation immigrants who had not been aware of the history of segregation in the country. Supporting legislation like the bill from Rep. Marcia Fudge, D-OHIO, which would mandate the inclusion of Black history in school curriculum, is a necessary component to changing the lens in which many, including Asian Americans, see those in the Black community, Meng said.

“I mean, the fact we have to legislate that is crazy. But it’s not being done,” Meng said. “Reforming the police system is not enough. We have to do a better job of education curriculum, oftentimes from the state level.”

She explained that in vocally supporting such legislation has led to important, honest discussions with her constituents about Black history. She also said proactively finding opportunities to bring Black and Asian leaders and community members together will spur more people to want to learn about racial justice and help.

Meng, who introduced the anti-Asian racism resolution, said that all communities have an obligation to fight for racial justice, adding that when it comes to discrimination that Asian Americans have faced, she’s noticed immense support from colleagues across races. Bass was among the first to contact Meng after the resolution’s introduction and discuss ways to support.

“One thing I know is that we as AAPIs must make sure that we are not only asking people to show up for us, but that we are willing to do the same for them, and that we truly show that our unity is our strength,” Chu added.