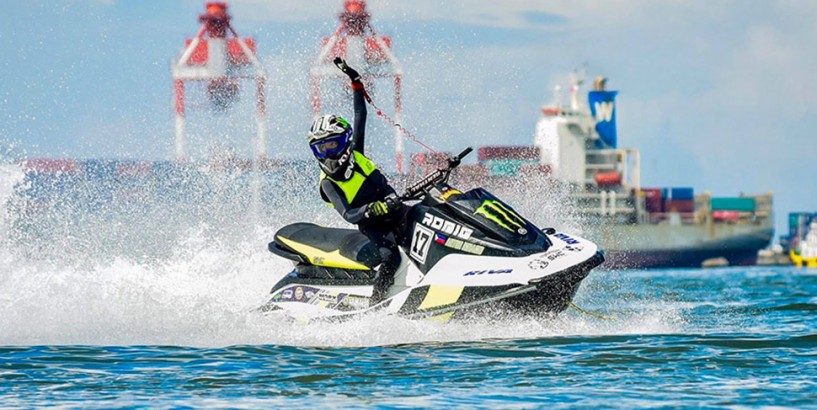 At five feet tall, 13-year-old Anton Ignacio may find himself as one of the shortest in his eight grade class. And yet, the student from De La Salle Greenhills is a Filipino champion after bagging gold at the recently concluded Grand Cultural Festival 2019 International Jet Race Challenge in Melaka, Malaysia.

“When they played our national anthem, as I stood on the podium holding our flag, I had goosebumps,” Anton shares of the moment when he was proclaimed the winner of the competition's Junior Time Attack category. With a swift record of three minutes and 12 seconds, he bested nine other jet skiers from all over Asia and, according to the Jet Ski Association of the Philippines (JSAP), becomes the youngest Filipino jet ski professional athlete.

Behind jet ski champ Anton Ignacio’s triumph are his parents Joyce and Bombet.

Anton, who has been competing in the local circuit for just over a year, reveals he “got a little nervous” after seeing the skill of other jet ski athletes in Malaysia. Nevertheless, he was “excited to compete internationally.”

Upon reaching the Melaka River, where the international competition was held, Anton and his team, which included his parents, Bombet and Joyce Ignacio, and Networx Jetsports’ coach BJ Ang, immediately realized that the odds were against them. “The category was for Seadoo Spark, and the jet ski I was used to riding was a Yamaha. We had to fix my Yamaha and tune it close to the ride of the Seadoo being used there,” Anton says.

Of his team, the athlete says, “I’m very grateful for my supportive parents for guiding me and also my coach since it's my first race outside the country. They multi-tasked, since we were only a four-crew team, but they made sure I was race-ready.”

Though small, the Philippine team was a force to reckon with. Anton's coach is JSAP's 2019 Rider of the Year, while his dad is himself an acclaimed international jet ski competitor, who won sixth place in the Amateur 1100 Stock Category of the 2019 IJSBA World Finals in Lake Havasu, Arizona. On the other hand, Anton's self-proclaimed momager makes sure that he subscribes to a regimen of weekend practices and well-balanced meals.

To prepare for the competition, Anton practiced every weekend at the beaches of Subic Bay and Calapan, Mindoro, and ramped up his training circuit even more a month before race day. When asked if this ever gets in the way of his studies, he replies, “Jet skiing taught me to focus and give my 100 percent in everything I do. It taught me to balance and be responsible in school and sports.”

Photo by Anton Ignacio . 'During the competition, I was thinking I wanted to win for our country! I owe my victory to God, our country, my family, and friends. [I thank them] for all the support and prayers,' he says.

After his international win, Anton has found his support group grow to include, apart from his home team of Networx Jetsports, a list of sponsors from Robig Builders and KYT Helmet Philippines.

With this boost of confidence, the young athlete has set his eyes toward conquering even more international jet ski competitions.

“Malaysia is the last race for this year for me,” Anton says. “But, I will be preparing for the next season of JSAP in 2020. We're also looking forward to other international races in Australia, Indonesia, and the World Finals in Arizona, USA.”