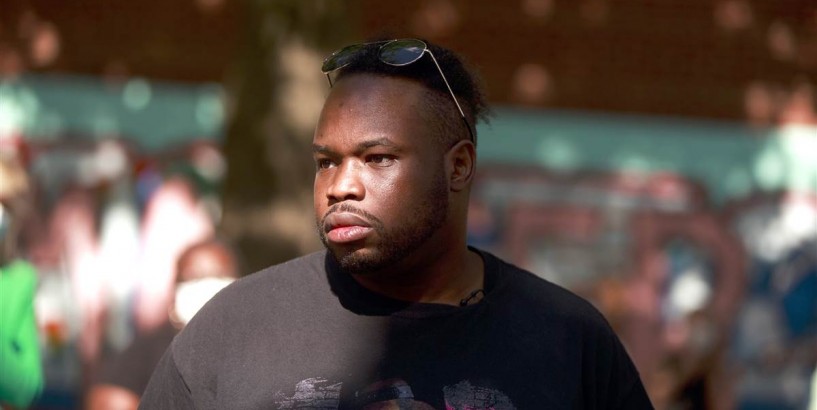 Two white men in Indiana have been charged in connection to an alleged July 4 assault against a Black man who had posted videos on the incident and claimed he was pinned against a tree. Sean Purdy, 44, and Jerry Edward Cox, 38, were charged in the alleged attack on Vauhxx Booker, 36, Monroe County Prosecuting Attorney Erika Oliphant announced Friday.

Booker, a member of the Monroe County Human Rights Commission in Bloomington, Ind., said in his Facebook account of the incident that men involved in the alleged assault "stated to the members of their party several times to, 'get a noose,' amongst some other choice slurs."

He also said in the post that he was attacked by five white men "who literally threatened to lynch me."

Purdy's attorney, Mark Kamish, told NBC News in a statement on Saturday that their legal team was “obviously disappointed” with Oliphant’s "unfortunate decision to charge Sean Purdy while choosing not to file criminal charges against his trespassing assailant."

“Indiana law allows citizens to make arrests of people punching other people on private property, and to use reasonable force in doing so. Indiana also has a broad self-defense statute,” Kamish said in the statement Saturday. "We would welcome a jury trial next week so the stigma of false and wrongful accusations can be exposed."

Kamish was apparently referencing Purdy's claim to investigators with the state Department of Natural Resources that the dispute began after he tried to explain to Booker and another person that they were on private, rather than state-owned property, in the area around Lake Monroe. Purdy also told state investigators that Vauhxx had punched him, according to the state report, which was released this week.

Purdy told investigators that "Booker was not friendly to him" because he did not like his hat, which he described as "a cowboy hat with a confederate flag on it,” the report said.

Cox's attorney, Joseph Lozano, did not respond to a phone call and email requesting comment on Saturday.

State investigators said in their report that "Mr. Cox stated that he called Mr. Booker a 'nappy headed b----' and he said that he was sorry about that."

Cox also told investigators "he heard specific comments about a rope and a noose but did not know who said them or the exact verbiage," the report said.

The state investigators concluded that they found evidence of multiple crimes by Purdy and Cox and by Booker, whom the report said could potentially be charged with misdemeanor battery and trespassing.

Booker, through his attorney Katharine Liell, released a statement in response to the investigatory report, saying it was improperly released and further evidence that racism is "systemic," The Indianapolis Star reported.

"Vauhxx Booker is the victim," the statement read in part. "Even suggesting that a victim of a hate crime is a suspect is inexcusable, immoral, and more evidence that racism is systemic."

The FBI is investigating the incident , according to The New York Times. Liell, Booker’s attorney, said at a press conference Friday that he has been interviewed by the FBI as part of the probe.

It is not clear if Purdy or Cox had been taken into custody as of Saturday afternoon.

Nicole Acevedo Nicole Acevedo is a reporter for NBC News Digital. She reports, writes and produces stories for NBC Latino and NBCNews.com.