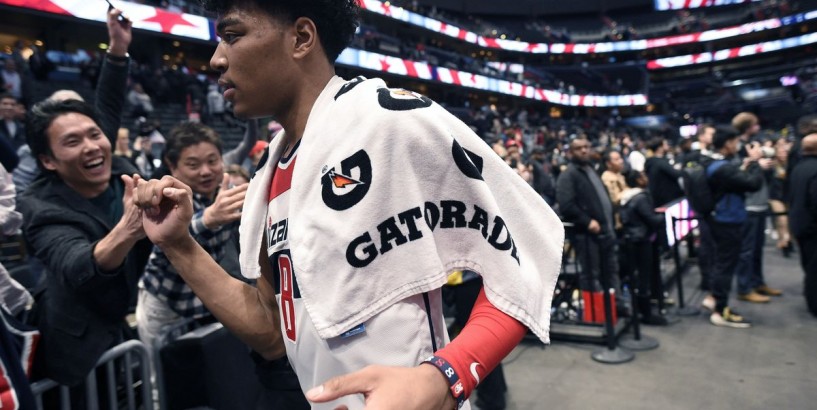 Wizards in playoff race thanks to poor Eastern Conference

Trump flies to Dover after rally to pay respects to two soldiers killed in Afghanistan At the All-Star break, the 19-33 Washington Wizards , who’ve acknowledged all along they’re in rebuilding mode, sit in ninth place in the conference. Going into Wednesday night’s games, Washington was three games behind the Orlando Magic , and just five behind the seventh-seeded Brooklyn Nets. The Magic and the Nets, like the Wizards , are sub .500 squads. Which means Washington has a chance — remote, but a chance — of climbing into the postseason. The odds are about 1 in 50 — 2.3% to be precise, according to Basketball-Reference’s probability projections. “It’s not out of the picture,” coach Scott Brooks said. “The seventh and eighth seed is below .500. I don’t know how you feel about that. It’s probably like watching an NFL game ended up being in a tie. Are you happy?” Around the Wizards , the front office and coaches have treated the fact they’re still in the race as more of a pleasant surprise than a challenge to make a do-or-die push. To be clear, the Wizards wouldn’t mind a trip to the postseason —“Anytime you can get in the playoffs, it’s good,” Brooks said. — but ownership has not made the playoffs an ultimatum. Consider: The Wizards passed on any kind of “win-now” move at the trade deadline. Instead, the Wizards traded for Jerome Robinson, the 13th overall pick in the 2018 draft, to see if he would fit their core moving forward. The team also acquired veteran Shabazz Napier, but that was primarily because the team needed a point guard after trading Isaiah Thomas for Robinson. After the trade deadline, general manager Tommy Sheppard said the deals give them flexibility in the future. “I don’t look at (it as), ‘What did we do to help us win today?’ as much as, ‘What are going to do to be able a perennial team?’,” Sheppard said. “A contending team has to keep adding talent and we did that. Short term, long term.” Since the turn of the century, the talent-laden powerhouses in the West have overshadowed the East, which has sent some conspicuously subpar teams to the postseason — especially at the bottom of the brackets. Since 2000, the conference’s eighth seed has averaged 40 wins. In the West, that number jumps to 45. Since Jan. 1, the Wizards are just 9-11, but they’ve still climbed over four teams in the standings. They’re in striking distance of the Magic because Orlando has won only nine of its last 21. Before Tuesday’s win over the Bulls, Brooks noted the positives for a young team making the playoffs. He saw firsthand in Oklahoma City that the Thunder, with a young core of Kevin Durant, Russell Westbrook and James Harden, benefitted from making the playoffs in his second year, much sooner than anyone anticipated. Brooks said players learn how to deal with the pressure of a playoff atmosphere, adding it can help the development of the team for years to come. Brooks, like others in the Wizards ‘ brass, has often referred to this season as a year of development. But center Moritz Wagner made it clear he and his teammates have bigger goals in mind. “I want to win games, man,” Wagner said. “I don’t care. I hate when people say that (we’re a developing team). Seriously. Because you don’t pay any vets respect when you say that and they’re not here to waste their time. We want to win games.”