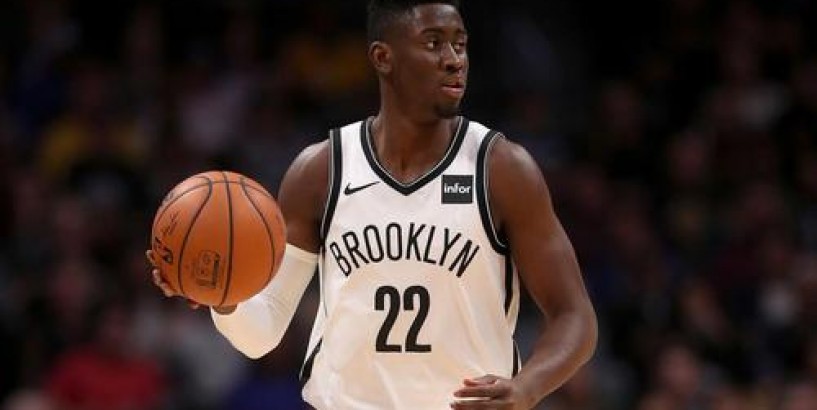 In the fantasy world, Labor Day weekend is all about fantasy football. NBA wise, it's about as dead as it gets for news and finding relevant items that can affect how you draft next month. Last week, we had a couple guys get paid and some beat writers were kind enough to share some of their thoughts on the teams they cover. Here's a quick rundown on things you may want to keep in the back of your mind leading up to October.

Caris LeVert got his bread last week with a three-year, $52.5 million deal. The catastrophic foot dislocation last year derailed his season, and he didn't start to look like himself until the playoffs. In those five playoff games against a tough defense in Philly, LeVert averaged 21.0 points, 4.6 boards, 4.0 dimes, 1.0 steals, 0.4 blocks and 2.4 treys. That sure does resemble what he put up in the first 10 games as he was becoming a favorite for Most Improved Player, averaging 20.0 points, 4.6 boards, 4.2 dimes, 1.5 steals, 0.3 blocks and 1.5 treys. The Nets are back on track as a competitive team in the Eastern Conference, so they may be ready to unleash LeVert as their No. 2 option behind Kyrie Irving . He's someone I'm planning to target in the 5-7 round range of standard leagues. Plus, the Nets have one of the best fantasy playoff schedules, so the late-season upside can be a difference maker.

Luka Doncic has been all over social media for #SkinnyLuka and the weight loss is expected to help him play faster, per the Mavs website. Back in Las Vegas Summer League, owner Mark Cuban and coach Rick Carlisle talked a little bit about Luka's upcoming season. A few key points were that they really wanted Luka to up his conditioning, which may help him get an increase in playing time from his 32.2 minutes per game as a rookie. Plus, the Mavs do want Delon Wright to guard the point guards, which could help Luka's wind and overall offensive upside on the stat sheet. That said, he's still really a tough sell in nine-category leagues. He was a Russell Westbrook-like guy without the strong steals after the break, averaging 22.7 points, 9.9 boards, 7.2 dimes, 0.6 blocks, 1.2 steals, 4.1 turnovers and 2.0 treys on a 42/26/69 shooting line to put him well outside of the top 100 per game in nine cat. It's not farfetched to see Luka upping his counting stats to the 25/9/9 range, but the destructive percentages with high turnovers will severely cap his upside and drop his floor. Plus, all those knee bumps and bruises adds a little doubt to his reliability factor, especially if the Mavs aren't competing in the Western Conference.

The Rockets decided to extend Eric Gordon to make it a four-year, $75.6 million deal. Gordon has been healthy during his time with the Rockets, but it'll be interesting to see how he holds up after several knee injuries. Cash wise, the Rockets could be paying him, Russell Westbrook and James Harden a whopping $115 million in 2022-23. That almost buys two actual SpaceX rockets at reportedly $120 million for the pair. For fantasy, it's going to be a little tougher to make a case for Eric Gordon Jr. EJ did see his value spike when Chris Paul missed time, but Westbrook has been extremely durable for the most part once he gets his season going -- not counting the Patrick Beverley stuff. Unless you're seeking a specialist for treys, he's not a player to target.

The Athletic had some interesting notes on Lauri Markkanen at the five, and noting that Daniel Gafford could be in front for the No. 2 center job. Markkanen played just 79 minutes without the other guys who play some center, so this would be a big step. In that small sample, he put up per-36 stats of 29.6 points, 8.2 boards, 0.9 dimes, 0.9 steals, 0.5 blocks and 5.9 treys. It's not outlandish to think that Lauri has the upside of a John Collins kind of a guy, but the problem is he's had a litany of injuries and it's just so hard to trust the Bulls. If he's there in round five, I'm interested.

Gafford was one of the most impressive players in Vegas, so him getting the No. 2 center spot would be fantastic. Wendell Carter Jr. has struggled to stay healthy in his young career, and Gafford could be a guy who shoots in the mid 60s for FG% with some boards and a decent amount of blocks. He's firmly on the deeper 12-team radar right now. I'm still firmly in on Carter Jr, for what it's worth.

The Wolves had a lot to say about some of their guys this week. Coach Ryan Saunders said Jarrett Culver will likely be the No. 3 PG while he is also expected to go 1-3 in the lineup. After a massive 10% boost to his usage last year, the growth chart will be something to watch next season. With Robert Covington at the four, there might be 24 minutes right away for the Texas Tech product. The Wolves have a stronger late schedule, so patient owners who usually make the playoffs could see some major dividends from Culver in March.

It sounds like Isaiah Thomas is going to get the first crack at the starting job, according to Candace Buckner of the Washington Post. Obviously, IT's risk is about as big as anyone you're going to draft when you're not factoring cost, but the thing is that there's almost no cost in draft capital unlike a Kawhi Leonard type -- hey, IT also has corn rows too now. Thomas has not been able to put together anything since he put up first-round value prior to the Kyrie Irving trade, and the Wizards wouldn't be unleashing him for 30-35 minutes. Still, there aren't many high-usage players on this roster besides Bradley Beal, so there's massive opportunity. He makes a lot of sense as a guy to take after 125 in a 10-12 team league, and hey, you can just cut him after the first week if he isn't in great shape. Rui Hachimura is also looking like a lock to start and it's seemed like his ADP has been held in check despite the huge opportunity in front him on one of the thinnest rosters in the league.

The Pelicans lost Darius Miller for the year with a ruptured Achilles tendon. It's a tough blow, but at least for Miller he just got a payday with a non-guaranteed deal in 2020-21. For the Pelicans, they're going to be missing some depth at forward, and now they may be more open to playing Brandon Ingram at the four against some face-up, non-imposing power forwards. This is all good news for BI, Lonzo Ball, J.J. Redick and perhaps even Zion Williamson. With the Pelicans fully expected to lead the NBA in pace with their "create and terminate" style of play, I'll be after a lot of them in the draft. I have Jrue Holiday at No. 8 on my board, as well.

Cam Reddish should be good to go for the Hawks, and is getting closer to a return to the court. The rookies voted him as the best bet for the top career, and Reddish was one of the best American prospects coming out of high school. The front office wants to play him 2-4, and also could get him up to 30 minutes. Reddish's talent and length does present an obstacle to the ceiling of Kevin Huerter, so it may be tough to target either of them in an aggressive fashion. If they're falling, they both could be worth it. De'Andre Hunter could play a lot of backup four, so it's possible Reddish, Big Red and Hunter all can co-exist -- I'm not sold on Hunter's fantasy appeal, by the way. Obviously, it's all systems go on taking Trae Young and John Collins while Bruno Fernando has some last-round appeal in deep leagues.

Giannis Antetokounmpo did miss some time on Tuesday due to knee discomfort. We've seen some knee issues from the Greek Freak before, so this is absolutely not something to write off even if there was no reason to play him. Personally, I'm a little low on GA compared to my colleagues because the Bucks figure to have a decent lead late in the season, which will up his chances for load management in the fantasy playoffs.

In one of the least surprising news items of the week, the Pistons are expected to rest Blake Griffin more. Griffin has battled some leg issues in the past few seasons, and he needed a knee scope after the season. He was only a top-65 player per game last year, so he's a really tough sell in nine-category leagues.

That's it for today! If you're reading a column about fantasy hoops at this time of year, I'd highly suggest checking out our podcast. You can find us on Apple pods , Stitcher , Art 19 or basically anywhere you get your pods.