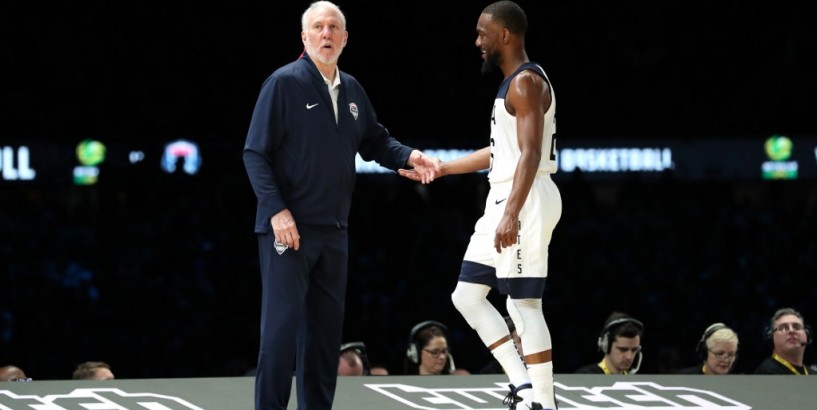 USA urged to improve defense ahead of Basketball World Cup

United States basketball coach Gregg Popovich says his team has to improve its defense and communication ahead of the World Cup despite an impressive 102-86 victory over Australia.

The reigning world champions posted a 31-point third quarter on the back of a barrage of three-pointers to overwhelm the Boomers Thursday evening after a tight first half.

Team USA is missing a host of top NBA names who have opted out of the World Cup, and the squad is still gelling as they target a sixth world crown in China, with the tournament tipping off on August 31.

Veteran San Antonio Spurs mastermind Popovich said the Patty Mills-led Australians were a tough team to play, running a fast offense that was hard to guard against.

“They do a great job moving and cutting. We’ll watch the film, and I think we’ll learn a lot from what we had to guard. I give them a lot of credit, really impressive,” he said.

The Americans ended the first quarter 22-20 in front and despite racing to an 11-point advantage in the second, they allowed the Boomers to trim the margin to just one point, 44-43, at the half-way mark.

“Our transition defense was poor, and they got three 3s in a row and that’s what happened down the stretch in the second quarter,” he said.

“Every coach moans and groans about transition defense. It’s a game of mistakes. But our communication wasn’t great in the first half in transition, better in the second half.

“But one thing we did do was board the whole game. We hit the boards hard, and that’s been a little bit of a problem for us. So, it was nice to see us do well in that regard.”

He was also pleased with how the world number one team reacted after letting their lead slip, going on a 10-0 spree early on the third quarter to regain control and comfortably close out the game.

“One of our big mantras has been composure and poise. Things are going the other way in some games, and the way you respond to that is really the measure of how you are going to do,” he said.

“So that was a real downer, the end of the second quarter. So to come out in the third quarter with that sort of focus was impressive and tells me a lot about the group.”

The two teams play each other again in Melbourne on Saturday, before the United States face Canada in Sydney next week ahead of their departure for China.