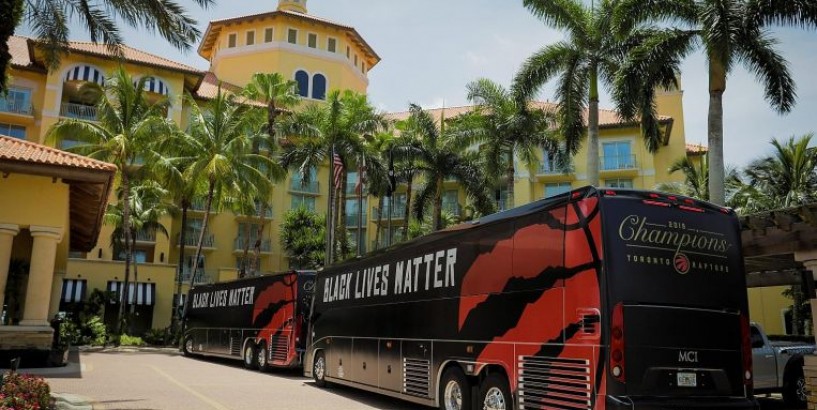 ORLANDO • League doctors and officials are concerned about the lingering health effects for National Basketball Association (NBA) players who contract the coronavirus, ESPN reported on Saturday.

"What if a 24-year-old catches it in Orlando and, in 14 days, he quarantines and is fine, but then he has these everlasting heart problems? (Or he) gets winded so easily, or he becomes a little bit too susceptible to fatigue?"

The NBA is preparing to restart the season, with 22 teams arriving for training camp last week at the ESPN Wide World of Sports Complex, located inside the Disney World resort in Orlando, Florida.

The venue has been closed off to the public, with strict safety measures imposed to ensure the remainder of the season gets off without a hitch behind closed doors, more than four months after the campaign was stopped in March due to the coronavirus pandemic.

A condensed series of regular season games will recommence on July 30 to determine the four play-off spots yet to be finalised as well as the seeding for the post-season.

At least 25 players and 10 staff members have tested positive for Covid-19 since mass testing started on June 23, and an infected player faces a two-week quarantine period before he can be cleared to return to the court. A doctor will determine when the isolation period is over, a process that will include a cardiac screening.

Matthew Martinez, a consulting cardiologist for the players' union, the National Basketball Players Association, told ESPN that players will need time to rest after a positive coronavirus test because doctors believe "the amount of cardiac damage can increase if you continue to exercise in the face of an active infection".

The league also wrote in a memo addressed to teams that the effects of Covid-19 on cardiac health, including myocarditis (inflammation of the heart muscle) were "not yet fully understood".

According to the American College of Cardiology's Sports and Exercise Cardiology Council, acute cardiac injury occurs in up to 22 per cent of hospitalised patients with Covid-19 - significantly higher compared to the 1 per cent prevalence in non-Covid-19 acute viral infections.

Still, San Antonio Spurs coach Gregg Popovich feels safer within the NBA "bubble", than in Texas, where his team are based.

What if a 24-year-old catches it in Orlando and, in 14 days, he quarantines and is fine, but then he has these everlasting heart problems? (Or he) gets winded so easily, or he becomes a little bit too susceptible to fatigue?

AN UNNAMED NBA TEAM GM, on the potential unknown lasting effects of coronavirus on a player.

While he had pondered sitting out the restart, he is happy he changed his mind, especially after the state recorded a single-day high of 10,351 cases on Saturday as well as 99 deaths.

He said: "Being 71 years old, I thought, 'Is this where I want to spend a lot of my time, doing this, under these circumstances?' But I talked to (NBA commissioner) Adam (Silver).

"It's not just being a loyal soldier in the NBA. I don't know where else you would be as safe as we are right now.

"From an intellectual and medical point of view, I would have to say I am safer here, if this 'bubble' works."