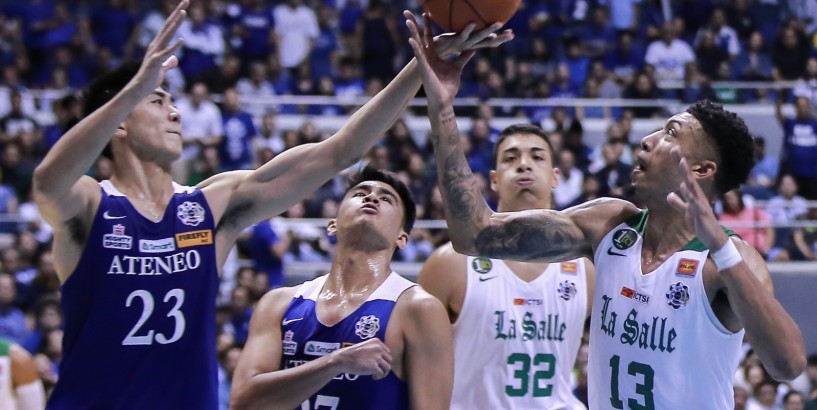 Ateneo’s Will Navarro (left) tries to get the ball from La Salle’s Jaime Malonzo in their UAAP men’s basketball match. (Rio Deluvio)

Defending champion Ateneo extended its mastery over archrival La Salle, 81-69, in the renewal of their age-old rivalry Sunday to gain a share of the lead in the UAAP men’s basketball at the Smart Araneta Coliseum.

The Blue Eagles leaned on a late second quarter run to enjoy a 51-29 cushion at the break before showing composure by holding off the Green Archers comeback attempt in the second half to produce their second win.

Brothers Mike and Matt Nieto stepped up when Thirdy Ravena and Isaac Go failed to offensively deliver, pacing Ateneo with 18 and 15 points while combining for eight rebounds and five assists.

The victory was the Blue Eagles’ fourth straight over their archrival Green Archers, whose have not won since Game 2 of their 2017 title showdown.

Ateneo also tied University of Santo Tomas for top spot in the standings before 10:30 a.m. faceoff on Wednesday at the Big Dome.

It was another tough game as far as Ateneo coach Tab Baldwin was concerned, saying that their offense wasn’t anything that they’ve been working on.

“It was a surprise break in the second quarter but overall, we shot the ball poorly. It was the push in the end that made us through,” said Baldwin.

The Eagles were in control for most parts of the first half, breaking away from a 30-28 lead midway the second period to a 22-point cushion at the half.

But the Archers regrouped with Jamie Malonzo, Andre Caracut and Justine Baltazar leading the charge, trimming their deficit to nine, 71-62 with 4:50 left in the fourth.

Gian Mamuyac lent a helping hand for the Eagles, scoring most of his 14 points in the pivotal moments.

Ravena and Go were limited to six and two points.

Malonzo and Caracut scored 18 and 14 points for La Salle while Baltazar posted 10.