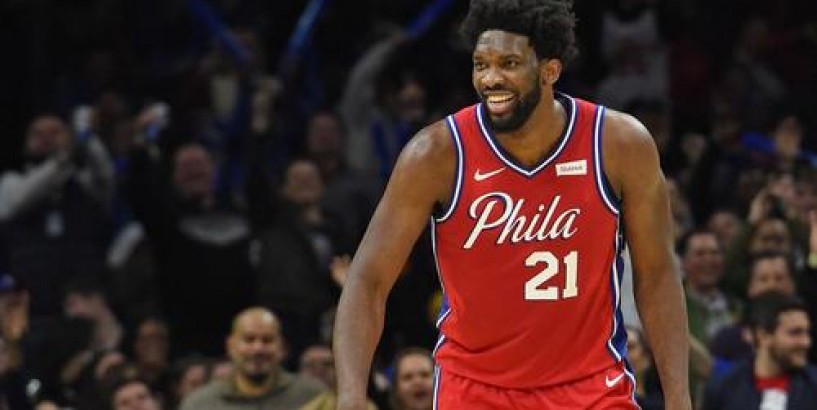 He appeared to make a statement, though, via a recent tweet he liked.

ESPN analyst Kendrick Perkins on Wednesday night criticized Embiid for noting he "hated" the NBA's plan to restart the season at Disney World and still does not think it's safe enough. Perkins' reaction was devoid of empathy and did not address Embiid's legitimate concerns, instead framing Embiid's comments as "just an excuse."

Embiid then liked a tweet showing "prime Kendrick Perkins," which features air balled jumpers, ungainly charges and many other lowlights.

Perkins later felt compelled to reply with a reel of more positive NBA moments for himself.

A champion with the 2008 Celtics , Perkins averaged 5.4 points and 5.8 rebounds in 782 NBA games. A three-time All-Star, Embiid has career averages of 24.1 points and 11.5 rebounds. There's clearly a disparity.

There was another layer to the mini-drama Thursday afternoon as Perkins reacted to Embiid wearing a hazmat suit before boarding the Sixers ' flight to Orlando.

Perkins tweeted the following in response to Embiid's attire:

However, according to a slew of Twitter users commenting on that post, Perkins initially sent and then deleted a harsher message that told Embiid he should have opted out.

While Perkins' antics have been foolish, they shouldn't overshadow Embiid's legitimate concerns. Perkins does not seem to acknowledge that it's possible to weigh various factors before making a difficult decision, which is what Embiid has done by choosing to travel to Orlando despite being wary of playing during a pandemic, and in an area where cases have recently spiked.

The Sixers' first game at Disney World is scheduled for Aug. 1 against the Indiana Pacers ( see schedule ).

Click here to download the MyTeams App by NBC Sports! Receive comprehensive coverage of your teams and stream the Flyers, Sixers and Phillies games easily on your device.