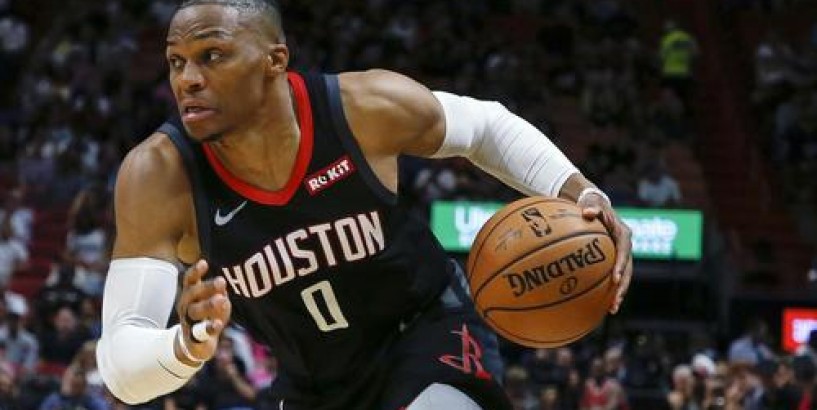 Over-30 Report: Westbrook North and South

I haven't been able to find video of those plays on Twitter or anywhere else, so it may have only happened in a fever dream. Either way, it was during those two moments of Vinsanity that I thought to myself: It's high time we checked in on the old guys.

Today, Roundball Stew presents an update on the most prominent fantasy options over the age of 30 (and by that I mean 31 and up, so you'll have to go somewhere else for James Harden superlatives). We will proceed in descending order of age, and with warmest regards/season's greetings to Carter, Udonis Haslem (39), Kyle Korver (38) and Tyson Chandler (37), we're only talking old guys with a notable fantasy impact, and the oldest guy in the NBA who's currently putting a significant dent in box scores is…

Melo has now played eight games in Portland, scoring 18 or more points in five of them, and it's high time to take him seriously as a fantasy option. After shooting just over 40 percent in 88 games between OKC and Houston, he's at 44.8 percent for the Blazers so far, and if you check out the highlights of his most recent performance (20 points against the Kings), it's clear that a year off from the NBA has him feeling pretty rejuvenated. I won't stop casually putting him out there in trade offers, but I'm perfectly happy to keep him on my roster if I can't trade him away. Sure, I can see a scenario where these 35-year-old legs aren't quite as fresh later in the season, but for the time being, I'm a believer: The Carmelo renaissance is real.

Did you know that Redick has averaged between 15 and 18 points per game for seven consecutive years, including this season? He has also never shot worse than 44.0 percent during that run, and is currently churning out a career-high 3.5 treys per game. And after a rough transition to his tenure in New Orleans (9.4 ppg on 38.7 percent shooting over his first eight games), he's at 19.4 ppg on 47.0 percent shooting with 4.2 treys in 13 games since. He's a machine.

The numbers above make it clear that CP3 is declining, but we should all hope to decline this gracefully. And yes, he remains a little scary as an injury risk/eventual shutdown candidate for the 8-12 Thunder, so I'm all for trying to trade him if you think there's a universe where you can get a more durable top-50ish player in return - especially considering that he hasn't missed a game yet this year. On the flip side, I also applaud the approach of simply being stubborn and staying on this train until the end of the line - whenever that may be.

Editor's Note: Drafting is only half the battle. Dominate all season long with our Season Pass! Use our NEW Start/Sit Tool, Trade Analyzer, Weekly Tiers, Rest-of-Season Rankings, Projections and more on your way to a championship! Click here for more!

There is not a lot to say here, in a good way. LeBron's points (25.4) and boards (7.0) are slightly down playing alongside Anthony Davis, but he's also dishing out a career-best 10.8 assists. He's back to clear-cut first-round production with no signs of losing momentum.

I'm not worried about Aldridge declining in any way (he's at 20.3 ppg on 55.2 percent shooting his last 13 healthy games). I'm also not really concerned about injuries, even though he has missed a couple of games recently with a thigh issue. After all, LMA has averaged 75 games played the last five years. My only concern here - and it's relatively mild - is that the Spurs have not been good this year, with an 8-14 record so far. So I lose a tiny bit of sleep here over a potential late-season shutdown if they continue to fall in the standings, especially since Aldridge is under contract for next year. I mostly think Aldridge is about as safe as it gets for a guy in his mid-30's in today's NBA.

The early-round Gasol that we've come to expect over the years is gone, but if you're punting points in any of your leagues, or can afford one spot with really low scoring on your roster, he's actually still plenty useful. Over his last 10 games, scoring-averse Gasol has averaged 6.1 ppg, 6.0 rpg, 4.5 apg, 1.0 spg, 1.3 bpg and 1.2 3s (on just 5.8 FG attempts per game).

Tucker has been a late-round guy in recent years because of his low-level combo of rebounds, steals, 3s and turnovers - and he's done so despite a FG percentage that's consistently been in the low-40s. This year, it's a different story, as he's averaging a career-high 10.1 ppg while shooting 53.1 percent from the floor, and 46.2 percent on 3s (also both career-highs). At the same time, Tucker is also a bit of a mirage in the rankings, because there is not a universe where anyone would give up the guys right around him (Donovan Mitchell, Jamal Murray etc.) to get him. So while I don't think he's got much in the way of trade value, I like him as a lower-half-of-roster option because his worst-case scenario, even if he cools off a lot, is probably something around top 100.

Millsap posted a couple of low-minute ugly stat lines in late November, but has bounced back with 15.5 ppg, 7.0 rpg, 2.5 apg, 1.5 bpg and 1.5 3s over his last two games. Though there's a lot of potential for rest as the season goes on given the Nuggets' depth (and the presence of high-upside backup Jerami Grant), I have zero quibbles with Millsap's stat line (13.7 ppg, 5.9 rpg, 0.9 spg, 0.8 bpg and 1.2 3s), and would simply keep him around if people in your league aren't overly excited about dealing for old guys. Which they probably aren't.

Click over to Page 2 below for updates on the players in their early 30s, including a recently-back-from-injury Kyle Lowry, a devastatingly bad Mike Conley and the complicated case of Russell Westbrook…

Currently sidelined with a groin injury, Dragic has been perfectly solid in points (15.9), assists (5.0) and 3s (2.2) when healthy, but the accumulation of injuries is a significant concern for a guy who only played in 36 games last season.

My sense is that Lowry is a bit of a polarizing player in fantasy leagues, with some managers maybe not valuing him as a borderline top-15 guy due to age, injuries, etc. One piece of evidence along these lines: His Yahoo ADP was 56.5. Personally, I'm all-in on Lowry as a top-20 fantasy producer when he's healthy, and now that he's back it might be worth testing how much it would take to get him in a trade.

It's around this point that I begin to think we go way too far in avoiding old guys in our fantasy drafts. Sweet Lou's ADP on Yahoo was 87.7, and while his steals (0.6), FG percentage (42.3) and turnovers (3.2) leave a bit to be desired, his potent combo of points (21.1), assists (6.3) and 3s (1.8) make him more than just any old top-100 kind of guy. In fact, the only player anywhere near him in the rankings averaging more than 20 ppg is Russell Westbrook, and we'll address his unique/troubling situation in a minute.

We've reached the first player in this entire column where I'm having a hard time finding anything optimistic to say - but I'll try. Conley has been flat-out bad, shooting a career-worst 36.9 percent from the field, and he's currently sidelined with a hamstring injury. Perhaps even more bizarre is that he's shooting this badly from the field while actually shooting reasonably well on 3s (37.4 percent), so it's not like he has completely lost it. I think the bigger issue is the fit/role in Utah, as his minutes (33.5 -> 29.9) and shot attempts (16.0 -> 12.5) are both down significantly from last year. If you're looking for a reason to buy low (here comes the optimism!), Conley did have a couple weeks in November where he looked like he was putting it together (19.0 ppg, 5.1 apg, 2.7 3s on 44.6 percent shooting during a seven-game stretch), but he followed that up by shooting 30.6 percent over his next six games prior to the injury. Personally, I would take the risk if I was already punting FG percentage, or was in a truly desperate situation to try to hit one over the fence. Otherwise, I'm staying away. (Final score: Pessimism 8, Optimism 3.)

Lopez is actually in the midst of a pretty ugly shooting slump (7.2 ppg on 36.4 percent shooting over his last five games), but he's propping up his value with 2.6 bpg during that same span. Ultimately, this isn't quite the same Lopez we saw last season, though this edition is still paying the bills just fine.

A light round of applause is in order for those who bet on Gallinari pulling off something close to a repeat of his 2018-19 numbers, as he's played in each of OKC's first 20 games and put up 14 or more points in every one of them, with multiple treys in every game except for one (en route to a career-high 2.9 3s per game so far).

He's definitely not exciting and I don't think my Rotoworld colleagues have fond feelings toward him as a fantasy option these days, but Jordan is still a serviceable deep-league center, who has put up 8.1 ppg, 8.8 rpg and 1.0 bpg over his last 10 games. I would 1,000 percent trade him for any other player with a modicum of intrigue.

If DeAndre Jordan is a boring backup, Rose is several miles north of that, with averages of 14.4 ppg, 7.2 apg, 0.6 spg, 1.0 3s and just 1.2 turnovers over his last five games - in 23 minutes a game. I would happily start him while healthy if your league runs even slightly deep.

It's pretty clear that Teague has transitioned from mid-round fantasy PG to serviceable/boring late-round guy, but at least he's doing so while still making a significant dent in one of the toughest categories, with 7.4 apg. He's also been pretty awful lately (7.6 ppg, 6.8 apg on 26.7 percent shooting over his last five games), and his season FG percentage has dropped all the way to 40.0. With that in mind, I think I'd be trying to shed my Teague investment(s) once he shows signs of heating back up.

Speaking of shedding investments, things have been spiraling downward lately for Love, who has missed time recently with injuries, and has put up a bland 13.2 ppg, 7.4 rpg, 2.6 apg, 0.2 spg, 0.2 bpg (with 2.6 3s) over his last five healthy games. Given the injury and shutdown risk he constantly carries around, and given that we're now a quarter of the way into the season, I'd be shopping him hyper-aggressively once he shows signs of heating back up.

Basically, it is all in fact bad, with one minor exception: Westbrook's free throws. Over his last 12 games, he's actually shooting 80.0 percent from the line, and 89.3 over his last five, so there's some hope that he may only wreck you in FG percentage and turnovers (4.5) moving forward.

Bottom line: If your team is underperforming, Westbrook is on it and you can't figure out why, you now have your answer. If you're somehow thriving with him on your squad, then I would feel no need to change a thing. Ultimately though, I think in most 9-category leagues, getting rid of Westbrook - despite his great counting stats - would be addition by subtraction.

This concludes the early-December Old Guy Report. I will now get back to looking for highlights of that Vince Carter blocked shot.