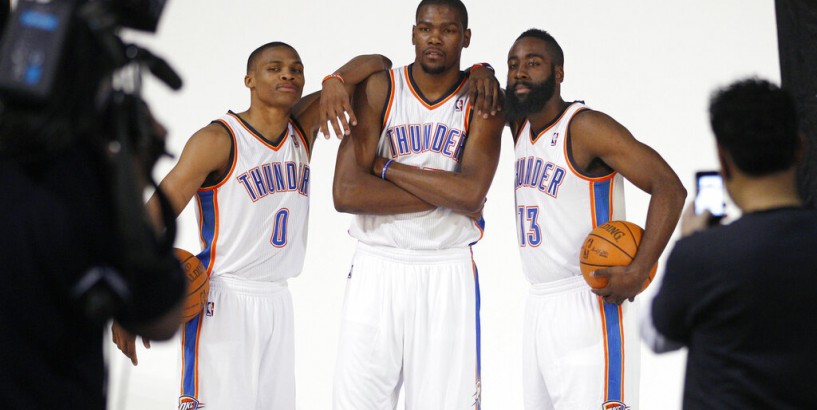 When he learned Thursday night the Thunder were planning to send Westbrook to the Houston Rockets for Chris Paul and draft picks, the 20-year-old Tulsa resident planned to make the two-hour drive to Oklahoma City with friends. They wanted to take videos and photos in front of the large images of Thunder players that adorn Chesapeake Energy Arena during the season, hoping Westbrook’s photo would still be up on Friday morning.

It wasn’t, so Maaroof came up with a different tribute. In a video he posted on Twitter, he put on the Westbrook jerseys he’s collected since 2012 , took them off one by one and laid them side by side in front of the arena. He wore 18 in the video, which has been viewed more than 85,000 times.

Maaroof said Westbrook has always been his favorite player. And the next addition to his collection will be a Rockets jersey.

“He was never perfect, but just the emotion he showed — he was very relatable, I feel like,” Maaroof said. “He was the underdog. People have always just not appreciated him the way they should have.”

With their emotional sparkplug gone, the Thunder, as we knew them, are no more. Westbrook was the last remaining player from the team that moved from Seattle to Oklahoma City in 2008.

Kevin Durant, James Harden, Serge Ibaka, Paul George and others, all gone. Now Westbrook. The trade to Houston was made official Tuesday.

He spent his entire 11-year career with the Thunder, despite earlier chances to leave. With Westbrook, the Thunder won at least 45 games for 10 straight years and reached the Western Conference Finals four times, including a run to the NBA Finals in 2012.

“It’s a lot of heartbreak,” Maaroof said as he recalled recent conversations with his friends. “Not to be dramatic, but it really feels like someone died. We’re all 20 years old, so we all grew up with Russ, grew up with this team, pretty much through middle school, high school, college now.”

Sure, Westbrook was a league MVP, two-time scoring champion and two-time All-Star MVP. Yes, he was a freakish athlete and triple-double threat every night. And against the odds, he evolved from perceived ball hog to two-time assist leader.

But it goes beyond that for Thunder fans. Westbrook is from the Los Angeles area, and with it came the flash and style one might expect. But he adopted Oklahoma and supported the community with his reading rooms, basketball camps, comedy shows and his yearly Thanksgiving meal at the Boys and Girls Club in Oklahoma City. The night everyone learned Westbrook was being dealt, he was at a comedy club in Tulsa for a benefit show.

Most of all, he’ll be remembered as the one who had stayed. He signed an extension in 2016, then signed a long-term deal in 2017, forever endearing himself to Oklahoma City fans who felt burned by Durant’s departure for rival Golden State.

“When he stuck it out, it was like bro, this is our leader,” said Jerry Manna, a Tulsa resident at the comedy show. “This is our guy. After he did that, I didn’t care what nobody said. I wasn’t accepting no Westbrook slander. No sir.”

Westbrook teamed up with Durant and Harden to introduce the Thunder as a league power early this decade. At their height, the young trio led the franchise to the finals seven years ago, a loss to the Miami Heat. Now, Westbrook will be re-united with Harden.

The run in Oklahoma City wasn’t supposed to end yet, but George left first for the Los Angeles Clippers, opening the door for an earlier-than-expected reboot. Thunder forward Jerami Grant was traded before Westbrook, and now Oklahoma City has added multiple first-round picks for its rebuilding project. It will take time and coach Billy Donovan will get plenty of chances to tinker with his lineup and give young players experience.

The Thunder haven’t been in this mode since the 2008-09 season, but Oklahoma City Mayor David Holt said it is time to embrace it. He notes that the same general manager who brought the success — Sam Presti — is still running the show. And that offers a sliver of hope for aching Thunder fans.

“We’re getting a king’s ransom for that,” Holt said of the Westbrook trade. “He’s taking what would have been a nuclear winter at the end of their contracts and quite possibly jumping us into a new chapter a lot faster than we might have expected.”

Westbrook is one of the most accomplished current players without an NBA title. In the three seasons after Durant left, Westbrook’s Thunder never made it past the first round of the playoffs, even with George. And Westbrook often found his way into conflict. His spark ignited the Thunder, but he often was among the league leaders in technical fouls in recent years. He has stubbornly defended his tendency to shoot more 3-pointers than his percentage indicates he should.

All was forgiven once the news broke. Thunder fans have spent the past several days reminiscing about Westbrook’s biggest moments — from the crazy scoop shot against the Lakers in the 2012 playoffs, to the 50-point triple-double and game-winning 3-pointer against Denver that clinched the NBA single-season triple-double record, to the 20-20-20 game this past season against the Los Angeles Lakers.

Now, they’re left with memories and hopes that the rebuild works out sooner than later. And of course, they will have the memories he creates when he comes back with the Rockets. Leslie Mahan, a moderator/administrator for Thunder fan pages on Facebook, believes the fans will welcome Westbrook when he returns.

“I honestly think that each time he comes back here, people are going to love and respect him and not boo him because he did a lot for the team, for the organization and for Oklahoma as a whole,” Mahan said.

Westbrook will still have his fans in Oklahoma City.

“I’m still going to be a Thunder fan, but I don’t plan on missing a Rockets game this season, either,” Maaroof said.