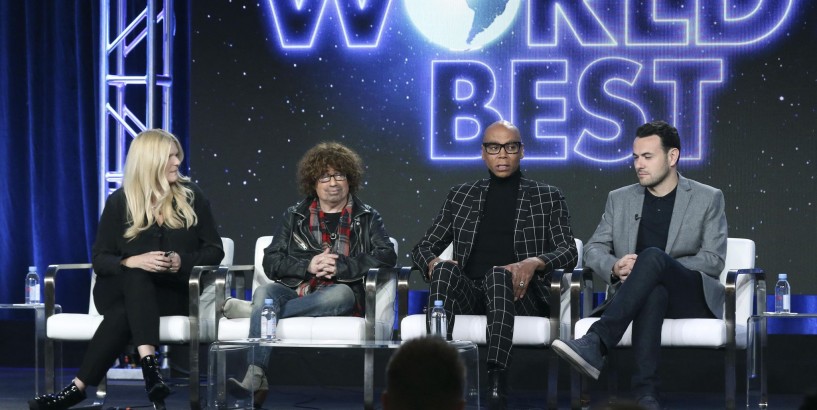 PASADENA, Calif. (AP) - A roundup of news from the Television Critics Association winter meeting, at which TV networks and streaming services are presenting details on upcoming programs.

Burnett has a track record following the NFL’s showcase game. In 2001, his “Survivor: The Australian Outback” debuted in that slot, drawing more than 45 million viewers.

Hosted by James Corden, “The World’s Best” premieres Sunday after Super Bowl 53. Besides impressing judges RuPaul, Drew Barrymore and Faith Hill, contestants have to break through the “wall of the world” featuring more than 50 experts from 38 different countries who score the competition. Among them is Brazilian UFC fighter Anderson Silva. The winner receives $1 million.

Burnett’s other big hit is “The Voice.” Darnell’s credits include “American Idol” and “Ellen’s Game of Games.”

“The World’s Best” joins a crowded field of reality competition programming, including “The Masked Singer,” renewed for a second season by Fox on Wednesday.

Darnell told TV critics that his show’s format isn’t based on any existing foreign programs and offers “the next new spin on a variety show.”

The show offers RuPaul a broader platform than he’s enjoyed as host of “RuPaul’s Drag Race” on VH1.

“We were all not prepared for the emotional journey that the show and performances took us on,” the drag performer said. “It was phenomenal to watch all these amazing people from around the world express themselves.”

The second episode airs on Feb. 6.

Noah Wyle is back in Chicago for a TV drama that’s far different than the 1990s hit “ER” that launched his career.

Wyle, who went from fresh-faced Dr. Carter in NBC’s 1994-2009 medical drama “ER” to action series including “The Librarian” and “Falling Skies,” choked up as he discussed “The Red Line,” a title referring to a major train line that cuts through Chicago’s diverse neighborhoods.

“My emotional reaction to my first reading of the script was so intense. I’ve never read a piece of material that moved me like that. I can’t even talk about the show without getting upset,” Wyle said Wednesday, pausing to gather himself.

In the eight-episode limited series debuting April 28, the shooting of teacher Daniel Calder’s doctor-husband leaves him as single dad to their daughter, Jira. The survivors are mired in grief, while the white police officer at fault for killing an innocent man faces the public and legal repercussions of his actions.

The series intends to look at all those deeply affected by the tragedy, from the victim’s survivors to the police officer and his family, the producers said. The intent is to bridge the gap between the “two Americas living side by side,” said Parrish, and, as Weiss said, “perhaps see themselves more clearly.”

“There is an epidemic that’s happening, when black men are being systematically killed,” the actress said. “To be able to discuss that on this kind of scale is important and it’s necessary. For me, that’s one of main reasons I was excited about walking into this role.”

“The Good Fight” will be musical as well as combative in its third season.

Creators Robert and Michelle King said the drama will continue to play off current events and mull the form resistance to the Trump administration takes in the lives of its characters. There also will be tunes that naturally reflect what’s happening in a scene, Robert King said Wednesday.

One example: series stars Christine Baranski and Audra McDonald’s characters perform an impromptu version of “Raspberry Beret,” bonding over their love of Prince. In another instance, “The Good Fight” newcomer Michael Sheen sings the Jackson 5 song “I’ll Be There.”

“One of the most terrifying things I’ve done, but I think it’s going to make for historic TV,” Sheen said, drolly.

Stone, charged with lying about his pursuit of Russian-hacked emails damaging to Democrat Hillary Clinton’s 2016 election bid, has pleaded not guilty.

While King said the drama will focus on the precarious state of truth in the present world and how Baranski’s character, Diane, pushes back as “the guardrails are coming off institutions,” he countered the idea that “Good Fight” is a leftist forum.

“We’re not real fans of shows that preach to the choir. Our show’s probably perceived as doing that, but it’s really, a lot of it, a satire of the left,” he said, citing an episode that explores racism among people “who pat themselves on the back for giving to the right causes and are really kind of scumbags themselves.”

“The Good Fight” begins its new season March 14 on CBS All Access, an on-demand and live streaming service.

MARRIED, AND TO THEIR WORK

Anna Paquin and Stephen Moyer first got together professionally and personally on “True Blood.”

Now they’re working together again, except she’s the star and executive producer and he’s strictly an off-camera boss.

Paquin plays an expert publicity maven in “Flack” debuting Feb. 21. Moyer is an executive producer on the six-episode Pop series.

The couple, who married in 2010 and have two children together, share a production company.

“We were looking for material to develop,” Paquin said Wednesday. “Two, three scripts showed up and we literally couldn’t stop reading them.”

The project took five years to get on television. Then Moyer was off in Atlanta shooting Fox’s “The Gifted,” leaving him unable to be as involved as he normally would.