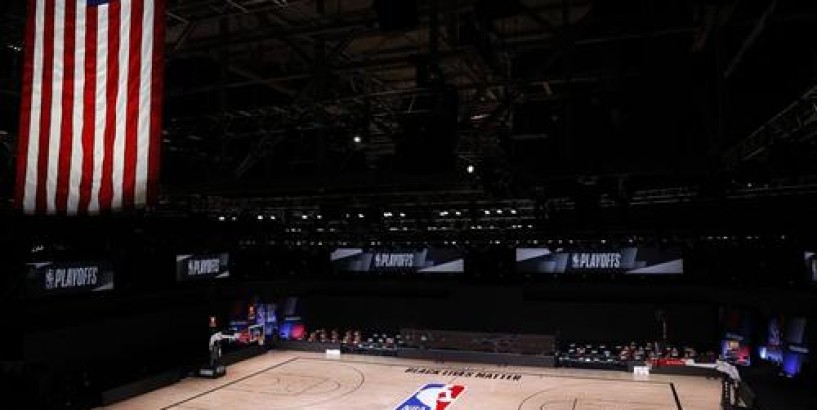 NBA players call meeting to discuss next steps; not leaving bubble. Yet.

NBA players have made a very loud statement - they would boycott playoff games Wednesday in protest of the shooting of Jacob Blake. They want the spotlight off them and their games and on social justice issues.

What's next? For the NBA players and the playoffs?

The players are meeting tonight in the bubble to discuss just that, something first reported by Shams Charania of The Athletic .

Several players told NBC Sports via text they do not plan to leave the bubble right now, that they want to meet and maybe wait a few days to see how things play out. This is not a decision they want to rush - leaving the bubble essentially means ending the playoffs. Players are frustrated on the social justice front, but they know that is a big step.

Some players, tired of the NBA campus and environment, have pushed to end the NBA playoff experiment, with ESPN's Adrian Wojnarowski reporting, "The season is in jeopardy."

Several players are pushing for teams to stay, finish out the playoffs, and use the platform they have for the cause, something reported by Chris Haynes of Yahoo Sports.

Players NBC Sports has spoken to are frustrated that their social justice message seemed to be fading in the front of minds, that it had become part of the background noise of the league, particularly as the playoffs started to become more dramatic.

The shooting of Jacob Blake - a Black man shot in the back at point-blank range, in front of his three children, by a White police officer in Kenosha, Wisconsin - shook players and coaches the NBA bubble. They felt limited in their responses from inside the NBA's campus. While protests erupted in Wisconsin and around the nation , sitting in the Walt Disney World Resort property in Orlando, they felt frustrated that they could do little more than play a game that felt like a distraction from the more significant issues our country faces.

Doc Rivers made a powerful statement about this after the Clippers game Tuesday.

"It's amazing why we keep loving this country, and this country does not love us back. It's really so sad," Rivers said.

Players have been doing what they can to keep awareness up - kneeling during the anthem, wearing "Black Lives Matter" T-shirts during warmups, talking about justice for Breonna Taylor, and others during interviews - but the shooting was a sign that actions were needed, not words. The boycott was the start of that.

The Bucks' George Hill questioned why the teams even came to Orlando if this was the result, and he was not the only one thinking along these lines.

Tonight's players' meeting should be spirited and not everyone is going to agree. It may take more than one meeting, one discussion to figure out what comes next.

NBA players call meeting to discuss next steps; not leaving bubble. Yet. originally appeared on NBCSports.com