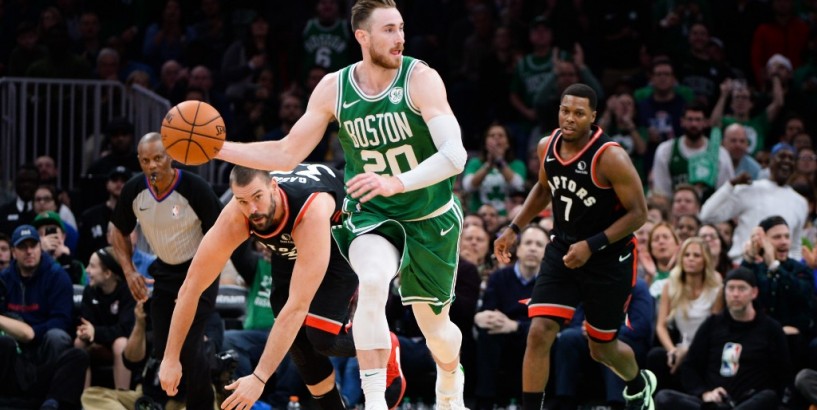 Boston Celtics forward Gordon Hayward will miss the next six weeks of the NBA season with a broken left hand following surgery on Monday, the team announced.

In this file photo taken on October 25, 2019 Gordon Hayward #20 of the Boston Celtics dribbles the ball past Marc Gasol #33 and Kyle Lowry #7 of the Toronto Raptors in the second half at TD Garden in Boston, Massachusetts. (Photo by Kathryn Riley / GETTY IMAGES NORTH AMERICA / AFP)

Hayward underwent the operation in New York to repair his ring finger, which was fractured Saturday in Boston’s 135-115 victory over San Antonio.

If Hayward sits out a full six weeks, he will miss 19 Celtics games but be healthy to return for a December 25 clash at defending NBA champion Toronto.

Hayward has been enjoying a stellar season with averages of 20.3 points, a team-high 7.9 rebounds and 4.6 assists a game before going out early against the Spurs.

The 29-year-old American departed after suffering the injury with 94 seconds remaining in the second quarter in a collision with San Antonio’s LaMarcus Aldridge, who was setting a pick on the play and was whistled for a foul.

Hayward spent his first seven NBA seasons with Utah before joining the Celtics, only to suffer severe leg and ankle injuries in the opening minutes of Boston’s 2017-18 season opener and miss the entire remainder of the campaign.

Celtics coach Brad Stevens said the Boston lineup without Hayward might change depending upon the opponent during his absence.

“We’re going to figure out in the next six weeks what’s best for our team. Hopefully Gordon will be back by then,” Stevens said.

“It might be ‘flavor of the week’ — who fits best in that game that day.”