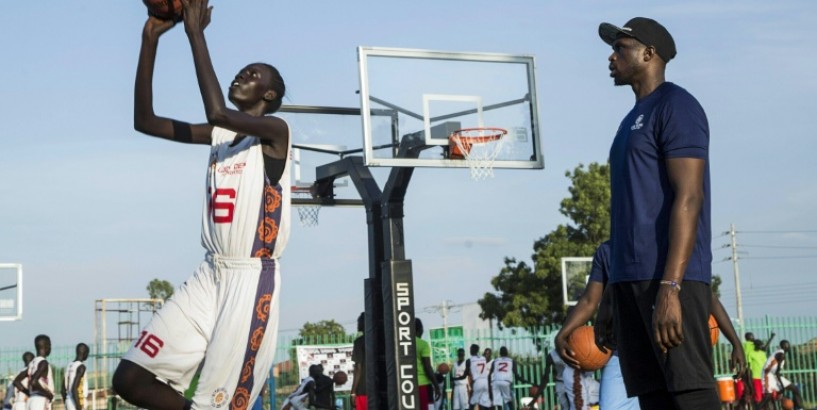 Luol Deng, who made a journey from South Sudan to NBA stardom, is calling it quits after a 15-year career after signing a one-day contract with the Chicago Bulls.

The deal announced Thursday allows the 2012 London Olympian, a stalwart for Britain’s basketball squad, to close out his NBA days with the same club where he debuted after being selected seventh overall in the 2004 NBA Draft.

British NBA standout Luol Deng, at right in South Sudan helping train young players, retired from the NBA on Thursday after signing a one-day contract with the team where he made his league debut, the Chicago Bulls (AFP/File / Akuot Chol / MANILA BULLETIN)

Deng, 34, was a child when he fled what is now South Sudan with his family for Egypt and they eventually settled in London, where Deng discovered basketball.

After a stellar single season at Duke University, Deng entered the NBA and helped Chicago end a seven-year playoff drought before a season-ending wrist injury cut his campaign short after 61 games.

He led the NBA in minutes played in the 2011-12 and 2012-13 campaigns, being named an NBA All-Star each season, before being traded to Cleveland in early 2014. Deng played two seasons with Miami and two more with the Los Angeles Lakers, although he played in only one game in the 2017-18 season.

“We’re very fortunate and humbled that Luol has chosen to retire as a Chicago Bull,” said team president Michael Reinsdorf. “He was a role model on and off the court during his nine-plus years in Chicago, and he gave everything he had to help us win.”

“From the moment we made Luol Deng the seventh overall pick of the 2004 NBA Draft, the Chicago Bulls became a better team,” said Bulls vice president of basketball operations John Paxson. “Luol carried himself with first-class professionalism and leadership… we’ll always remember his All-Star career and the fierce competitiveness he brought to both ends of the floor every night.”

The Bulls will honor Deng at an undetermined game during the upcoming season.