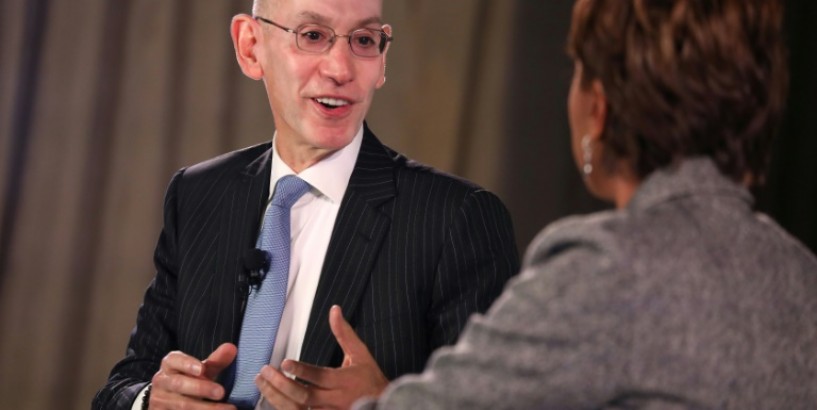 “I don’t know where we go from here,” Silver said at Time magazine’s Time 100 Health Summit in New York. “The financial consequences have been and may continue to be fairly dramatic.”

“The losses have already been substantial,” Silver said. “Our games are not back on the air in China as we speak, and we’ll see what happens next.”

Silver said Chinese government and business officials called for Morey to be fired for expressing his opinion.

“We were being asked to fire him by the Chinese government, by the parties we dealt with, government and business,” Silver said. “We said there’s no chance that’s happening. There’s no chance we’ll even discipline him.”

The NBA was criticized for early statements after the firestorm erupted that included the word “regrettable” and many saw as a nod to China.

“We did use the word regrettable initially but regrettable was modifying the fact that we had upset our Chinese fans,” Silver said.

“We were saying we regretted upsetting our fans (but) also at the same time supporting Daryl Morey’s right to express himself, right to tweet… Maybe I was trying too hard to be a diplomat.

“There was no regret directed to the government (but instead) to our fans, hundreds of millions of them in China.”

Silver again tried to walk a fine line between free expression and the league supporting a particular position.

“Providing a platform for freedom of expression is different than ajudicating a particular point of view,” Silver said.

“The values of the NBA — the American values, we are an American business — travel with us wherever we go. And one of those values is free expression.”

NBA out of China ‘fair’ issue

Silver said it was a “fair” position that the NBA should not operate in China at all due to the Communist nation’s political differences to the United States.

“I understand there’s a point of view from some that we shouldn’t be in business at all in China and I’d say from an intellectual standpoint that’s fair, not getting into the tweet or the response to it,” Silver said.

“But if people believe we shouldn’t be engaged in commerce in China, or frankly in other places in the world where they don’t approve of their practices or government, OK, but then, at some point, I look to the American government.

“We’re in the middle of negotiating a trade agreement. Many multi-national corporations trade extensively with China and if that’s ultimately how our government feels we should be dealing with China, again, we’re a US company.”

Leaving a final decision to the US government on an ethical issue could open another area for criticism, but Silver says the league has always seen engagement as a positive value for uniting people — one that has also proven very profitable.

“When you build that commonality over time, it potentially leads to shared understandings, empathy, begins dialogues, often things that aren’t happening at high levels among official government operatives or diplomats.”

Silver fears much of what the NBA had built over the past 15 years in terms of cultural ties to China has been lost.

“I felt we had made enormous progress in terms of building cultural exchanges with the Chinese people,” Silver said.

“I have regret much of that was lost.”