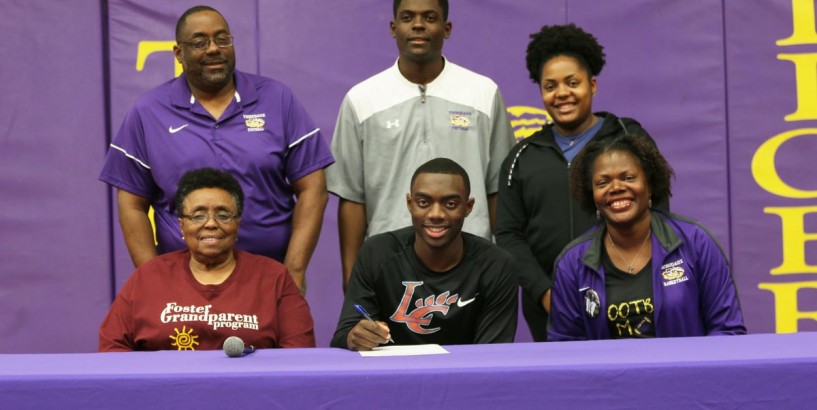 In fall months, he stood out as a defensive back and even played quarterback and receiver at times for the Tigers.

In winter months, he played basketball, helping the Tigers win a Class 5A state championship during his junior season last year.

In spring months, he contributed to the Tigers’ baseball program.

Young has experienced a busy schedule in high school, but he got an unexpected and unwanted break when the coronavirus shut down the spring sports season in March.

It forced Young to sit at home and try to find things to do during the ongoing virus stay-at-home measures. It was difficult because he was used to being at practices or games this time of year.

“This is the first time since eighth grade that I’ve really had a break,” Young said. “This is the longest I’ve had off.”

Although a break was nice, Young said he prefers staying active. He has found ways to keep busy during the ongoing coronavirus situation.

“I don’t like it,” Young said. “I’ve been working out at home and doing what I can to stay in shape.”

There is a reason why Young works so hard. It is because he wants to accomplish many goals during his lifetime.

“I just want to be successful, whether it is in sports or in life,” Young said. “I just want all my hard work to pay off.”

Young is the son of Lennie Young Sr. and Latainia Young . His parents praised him for always being dedicated during all three sports seasons.

“ Tyren has always been a child who exhibited athleticism from a very young age,” Tyren’s parents said. “As he got older, he stayed humble to his talents and continued to work hard to be the best. He’s not only athletically talented, he’s also a leader and his peers look up to him for his leadership. Tyren focuses on making good decisions and striving to be the best at whatever he set his mind on.”

Young’s hard work definitely paid off during his days at Thibodaux. He signed a college scholarship to play football at Louisiana College in Pineville during National Signing Day on Feb. 6.

Young said it was an emotional moment to sign a scholarship with his family and friends looking on.

“It’s a dream for anybody to play in college,” Young said. “For me, I have an opportunity to go out and do that. I’m going to make the most of it and do what I can.”

Young , who stands at 5-foot-11, 175-pounds, played multiple positions during his Thibodaux career. He will focus on being a safety at Louisiana College . Thibodaux head football coach Chris Dugas often said Young reminded him of New Orleans Saints player Taysom Hill with his ability to play any position on the field.

Young said football was his favorite sport to play out of the three he did at Thibodaux.

“I just liked being able to be violent and not getting trouble for it really,” Young said.

Click to find out more about a new promotion

“That’s been an inspiration for everybody especially me,” Young said. “We’re kind of like the same height and same size. I’m trying to make it to the NFL too.”

Young said his goal is to contribute early and often to Louisiana College’s football program.

“The game is going to be faster, so I’m going to study film a lot and try to get on the field early,” Young said.

As a basketball player for Thibodaux, Young was a key leader for the Tigers during their run to the Class 5A state championship last year.

Young said it was an incredible honor to win a state championship with his teammates, who he calls his “brothers.”

“It was special because we were the first from Thibodaux to ever do it,” Young said. “A lot people can’t say that. It was a great season. For us to go 33-2 overall that year, that’s amazing.”

Thibodaux didn’t win state during his senior season, but Young had one of the best nights of his basketball career when he scored 30 points to lift the Tigers to a 95-66 win over East St. John on Jan. 28. He made 9-of-11 3-point attempts.

Right after his senior season of basketball ended in February, Young quickly jumped into baseball.

But he didn’t get to play much. Thibodaux’s baseball season ended after just 10 games. The Tigers had a 7-3 record.

Young said he believed Thibodaux would’ve made noise in the Class 5A playoffs if the season would’ve finished.

“I think we were making a trip to Sulphur for the state tournament this year. Most definitely,” Young said. “The chemistry was there. I just feel like we were ready this year.”

Young said the Tigers were on the bus traveling to a road game when they found out their season was canceled, forcing them to turn around and go home.

“It was devastating really because it was my last time being able to play with those guys,” Young said. “It’s kind of hard knowing I won’t get to play with them again.”

Although the virus ruined his senior year, Young said it has taught him a valuable lesson about life.

“Do the most you can in one day because you never know what the next day will hold for you,” Young said. “I’m never going to forget my senior year.”

During his high school career, Young said he wanted to be positive influence for his teammates.

“My teammates and I all worked together,” Young said. “They look at me more as a leader from what I do. When I’m doing something, they watch me because it’s going to be done right. They follow after me really.”

Young, who was named Thibodaux’s homecoming king during football season, said he is now looking forward to the next chapter of his life as a student-athlete at Louisiana College . He plans to major in mass communication with a concentration in broadcast journalism.

Young said he will miss being a Thibodaux student. He took time to thank all of his supporters.

“I want to thank all of the coaches at Thibodaux High and everybody in the faculty,” Young said. “My parents definitely. I want to thank God for blessing me with everything I have.”

“We’re all going to miss him next year,” Clark said. “He was a great leader for us. He worked hard in everything and made good grades. Everyone in the faculty and student body loved him.”

While he attends Louisiana College , Young said he knows he will see his parents sitting in the stands cheering him on. They traveled to most of his games throughout his life, including being one of the few Thibodaux fans in attendance to see the Tigers play Natchitoches-Central in Natchitoches during the 2017 Class 5A first-round state playoffs. The Chiefs won the game 90-52, but Young said he was proud to see his family in the stands.

“They’ve always been there for me,” Young said. “I remember my freshman year in 2017, we went all the way to Natchitoches-Central for the state playoffs. We had three fans there. It was my mom, my dad and my sister (Tiara Young-Landry). That was our three fans at the game.”

Young’s parents said they would drive to the end of the world to watch their son play. After all he has accomplished, they are very proud.

“As parents, we have always tried to set a good positive example for Tyren and also encouraged him to work hard to achieve his goals,” his parents said. “We have also been very supportive of Tyren and didn’t mind going above and beyond to help him achieve his goal. As he prepares to go to college, we continue to motivate and support him instilling in him that God, grades, and hard work play a vital role in achievement. We are definitely proud parents who don’t mind sharing it with the world.” Please Top Stories