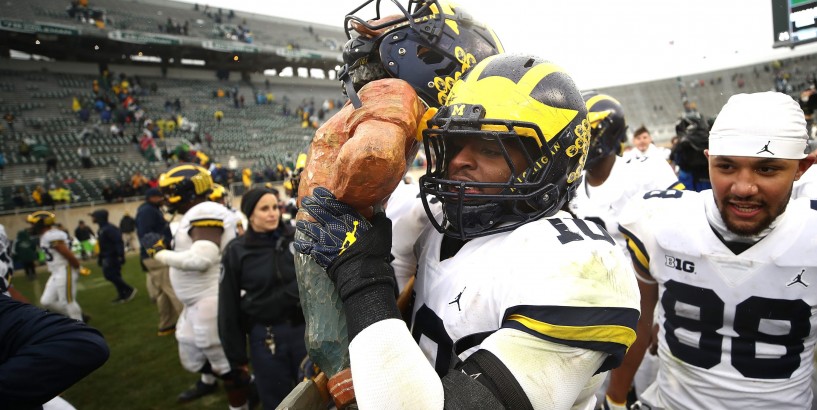 PITTSBURGH — It wasn’t premeditated, just an emotional response to a rivalry destined to boil over. That was former Michigan linebacker Devin Bush’s explanation for stomping the Spartan logo a year ago at Spartan Stadium. And that was former Michigan State cornerback Justin Layne’s rationalization for his choking gesture toward U-M's Eddie McDoom two seasons ago in Ann Arbor. Bush and Layne, once on opposite sides of this bitter rivalry, are rookie teammates with the Pittsburgh Steelers. Bush, a starting inside linebacker, arrived as the No. 10 overall selection in the NFL draft and Layne, a reserve cornerback, was picked in the third round . “It’s been great,” Layne said. “That beef, me and him are better than that. “But it’s always fun to talk about, (expletive) and giggles.” Added Bush: “We’re the best of friends, but as of right now I’m not his friend.” A year ago, the two were in the center of the latest Michigan-Michigan State controversy. Layne was in the middle of the line of Spartans spanning the width of the field, arms locked, advancing from goal line to goal line. Bush was among a small contingent of Wolverines warming up in the middle of the field, in the Spartans’ way and determined not to back down. “It kinda just happened,” Bush remembered this week, taking a break from preparations for Thursday night's Steelers game in Cleveland. “There’s already high tension and, you know, they did what they did. It was kinda just a reaction thing, it wasn’t premeditated. “I wasn’t moving, regardless, I wasn’t moving. In my mind, I’m like, ‘They’re not about to run me off this field. They gotta go through me or over me or behind me, under me, something.’” The Spartans kept coming and, “The captain of our team said, ‘Don’t break the line,’ so we weren’t going to break it,” Layne recalled. “It’s the Michigan-Michigan State rivalry, we take that serious.” Bush was enraged enough by the ensuing confrontation to attack the logo at midfield shortly thereafter. “I was pissed,” he said. Former U-M tight end Zach Gentry, selected by the Steelers on the fifth round this spring , said Bush's actions were misunderstood initially. “It was a little misportrayed nationally because I think they just thought he did it out of spite,” Gentry said. “It was when State had locked arms in pregame and kinda walked through, I think he was trying to get by and they were messing with him a little bit, wouldn’t let him get through, threw off some other people’s headphones. “I just remember him being so emotional, really it just brought everyone else up around him. He was super emotional and a lot of those guys were pretty angry. I think it really actually ended up helping us and fueling us in that game.” Added Bush: “You see what happened – 94 yards of total offense,” referencing U-M's 21-7 win last year . Layne reacted the year before, nothing more, he maintained, after McDoom dropped a pass at the MSU 31-yard line with 15 seconds left and U-M trailing, 14-10. “That was just an in-the-moment type of play,” Layne said. “I didn’t think about it too much, it just happened. “It went viral, everything, the picture, the GIF, whatever you call it, it was big. It was all over the walls after we beat Michigan , there were banners of ‘The Choke’ and all that. It’s pretty big, especially at Michigan State." It’s a rivalry that still resonates, even among professionals. “Michigan only beat me once,” Layne said. “I don’t buy that ‘little brother’ stuff.” Mike Prisuta was a special writer for the Free Press while attending Michigan State in the early 1980s. He is now the Sports Director of WDVE-FM (102.5) in Pittsburgh and the host of the Steelers Radio Network Pregame Show.