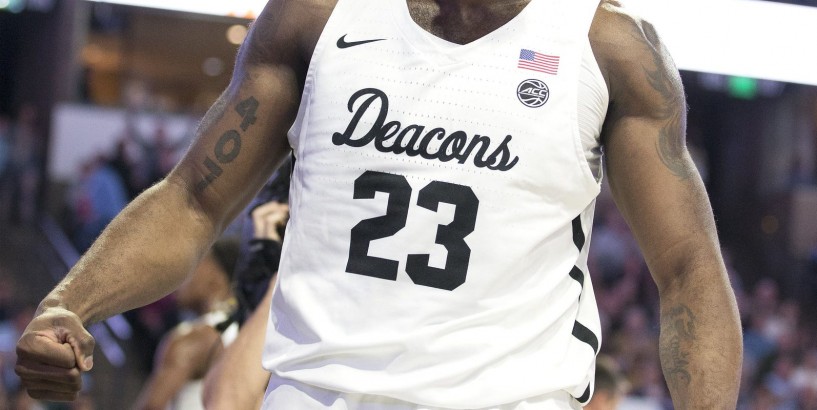 Michigan basketball's offseason has been full of moving pieces. And it's still not clear how each of them will fit together. The Wolverines' leading returning scorer, Isaiah Livers, remains in the NBA draft , but still may return to school. Nojel Eastern, who announced May 14 he was transferring to U-M from Purdue , also has his name in the draft, and if he returns to college basketball (he has yet to be announced by the program), he might need an NCAA waiver to become eligible next season. On Tuesday, the Wolverines' received a commitment from yet another transfer, Wake Forest guard Chaundee Brown , who joins the list of players with unclear futures. When will Brown play for Michigan? No one knows just yet. The only certainty is that he has committed to play for the Wolverines. In that sense, Brown is another variable in what has become a somewhat complicated equation. To date: The Wolverines have lost three players to the transfer portal, struck out on two five-star prospects and added three transfers, only one of whom (Columbia transfer Mike Smith) will definitively be able to play in 2020-21. Brown is coming off his junior season and might have to sit out a year, per NCAA rules. He could also apply for a waiver for immediate eligibility based on Wake Forest's coaching change this offseason, though history suggests such a move is a crapshoot. Meanwhile, the NCAA is expected vote on legislation this month that would allow one-time transfers to be eligible immediately . If it passes, Brown — and Eastern — can play next season. For now, the Wolverines must account for two possibilities: That Brown plays his final season this winter, or sits out one season and plays in 2021-22. If he's immediately eligible, it takes some squinting to picture Brown's fit with the current team. The 6-foot-5, 220-pound wing has good size and scoring ability, averaging a career-high 12.1 points and 6.5 rebounds this past season for the Demon Deacons. Brown can bully defenders at the rim and use his size and strength to score through contact. He is not much of an outside shooter, averaging 32.2% on 2.6 3-point attempts per game. However, his free-throw shooting — he has made 83% in his career — is impressive. Where would he fit in next season? Michigan's backcourt remains unsettled, and Brown seems more equipped to play the three- or four-position rather than the two. The Wolverines already have Franz Wagner, who proved to be an above-average player at the three as a freshman. It seems unlikely that Brown would displace Wagner there. Livers could still return and hold down the four, and even if he keeps his name in the draft, Brandon Johns Jr.'s combination of size, rebounding and shooting will factor in at that spot. If Brown isn't immediately eligible, the move likely can pan out. Livers will have graduated, and Wagner could very well be in the NBA draft. That would leave the Wolverines in need of a wing. Point guards Eli Brooks and Mike Smith will be gone, leaving a gap in experience on the roster. Enter Brown, an experienced wing who has played high-major competition. With all the moving pieces and the fast-moving nature of college basketball, it's often difficult to break down a team's scholarship situation — and for Michigan, there are now several distinct scenarios. As of now, the Wolverines are using all 13 of next season's scholarships. The trickier part is counting the numbers for the season after that. If Brown and Eastern are both eligible in 2021-22, the Wolverines would have four open scholarships to fill (without any early NBA attrition or transfers). If one plays this season and the other sits, there would be five open scholarships entering 2021. If both play this season, there would be six — almost half of the 13 allotted. From an outside perspective, having one of Brown or Easter eligible next season — and the other player eligible in 2021-22 — seems like it would help Michigan most. The Wolverines could use more experience and another player who, at the very least, could provide steady rotation minutes; they could use the same thing in 2021-22. Brown's transfer likely will be one of the final moves of the offseason, with all eyes now turned to Livers and his NBA decision. But intrigue is here to stay as Michigan figures out how to fit all its new pieces together. Contact Orion Sang at osang@freepress.com . Follow him on Twitter @orion_sang . Read more on the Michigan Wolverines and sign up for our Wolverines newsletter .