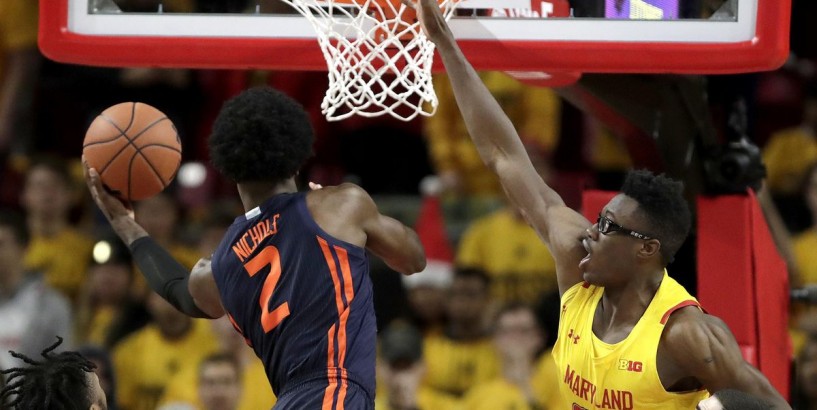 Nancy Pelosi: House to trigger War Powers Resolution to limit Trump's retaliation against Iran “Our intent wasn’t to play (Smith) at the five this year. Our intent was the four,” Terrapins coach Mark Turgeon said Monday. “So the kid just keeps sacrificing for the team, does whatever he has to do and then if Chol ever gets back to somewhat healthy (and) who he is, then Jalen will play more four, so he’ll adjust for us again.” Turgeon said the sophomore from Baltimore doesn’t get caught up in the expectations of being a top 25 recruit in his class or having NBA potential. “He’s kind of a reluctant superstar at times,” Turgeon said. “I don’t want that to be portrayed as a bad thing. It’s just, he’s just a really good kid. So we’re on him, we need him to do more and now we’re hitting — we’ve played a tough schedule — but the meat of our schedule.” Translation: conference opponents from here on out. Maryland (12-2, 2-1 Big Ten) rose three spots to No. 12 in Monday’s new Associated Press poll following a 75-59 win Saturday over Indiana, and the Terrapins would notch their best win of the year should they take down the Buckeyes. Though Ohio State fell out of the top 10 in the new poll after consecutive losses, both programs have spent time this season ranked inside the top three. According to the advanced KenPom rating system, Ohio State is the fourth-best team in the country and Maryland ranks eighth. Ohio State’s offense flows through Wesson , who averages 14.7 points and 9.2 rebounds per game and doesn’t wilt at the free throw line. The center dropped from from 270 to 255 pounds before the season (at one point in high school, he checked in at 325 pounds). From watching film, Turgeon felt Wesson ’s passing has improved, too. “He’s always been a great passer but his passing even looks sharper this year,” Turgeon said. “He’s terrific. He’s done everything he is asked with his body and he’s playing at a high level. In my mind he gives them a chance to win a national championship because he’s that dominant of a player. That’s a long ways down the road, but he gives them a chance because there’s not many like him in college basketball.” With Bruno Fernando at center last year, Maryland contained Wesson , holding him to 6-for-19 shooting over two games and 9.0 points per game. This year, Turgeon said he’ll use a few defenders on Wesson to keep fresh bodies on him, but the task largely will fall on Smith . Though Turgeon considers Smith “twice the player today as he was last year,” he admitted the forward hasn’t been the rim protector the program needed. He’s also prodded Smith into playing more assertively with the ball. “The coaches’ main emphasis with me is pretty much try to dunk everything, and every time in practice, that’s what I practice,” Smith said. “Every time I grab a rebound, I’m trying to dunk it. Every time I get a wide-open break, I’m trying to dunk it. It’s just being more aggressive toward the rim.” Smith isn’t intimidated by his looming assignment of guarding Wesson , saying he’ll trust the scouting report and his principles. As for manning the five instead of the four? “A position’s a position in basketball,” he said. “It’s just a matter of the mentality you have of playing it. I’m not the biggest big but I’m always gonna put up a fight for it.” Sign up for Daily Newsletters