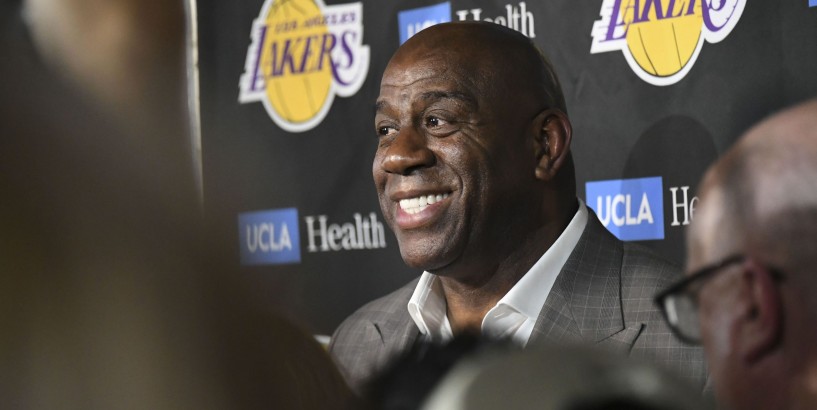 Former Michigan State and Los Angeles Lakers basketball star Magic Johnson turns 60 on Wednesday, Aug. 14. Ahead of his big day, Johnson decided to bestow a gift unto his loyal Twitter fanbase. "In honor of my 60th birthday tomorrow, I put together a few lists of top favorites," he tweeted . The lists are mostly alphabetical, aside from a few instances here and there. Make it the second list that Michael Jackson tops, as the Jackson 5 take the cake for Johnson's favorite music group. Earth, Wind and Fire comes in at second, The O'Jays at third, Commodores at fourth, and L.T.D. at fifth. In his heyday, Johnson and Larry Bird represented opposite coasts competing for NBA supremacy. In his hip-hop list, Johnson pits a similar rivalry atop his chart - Tupac and The Notorious B.I.G. After LL Cool J at No. 3 and Run DMC at No. 4, Johnson's list once again goes back into alphabetical order. The King of Pop tops the list at No. 1, with Prince and Stevie Wonder following suit. While this list sticks to the alphabetical order as the others do, his R&B list does have a clear top nine before reverting back to the order. " The Godfather " ranks first on his list, and aside from that film (and " The Bourne Identity "), the list is in alphabetical order. " Shaft ," which debuted in 1971, made the list. So did the 2019 version. Only one " Rocky " film made Johnson's list. Aaron Rodgers ranks No. 1 on his list, with Alex Rodriguez and Arnold Palmer rounding out the top three. Former Michigan quarterback Tom Brady clocked in at No. 56. Magic's former coach in Los Angeles, Pat Riley , made the list as well. Worthy of note: Neither Lansing nor Los Angeles made the list. Also worthy of note: All places are outside the U.S. Johnson recently went on vacation Antibes, which made the list. " 21 Jump Street " tops the list. " The Three Stooges " and " A Different World " come in second and third, respectively. " First Take ," one of ESPN 's talk show, ranks 20th on his list. Johnson previously went on "First Take" to go in-depth on his exit from the Lakers .