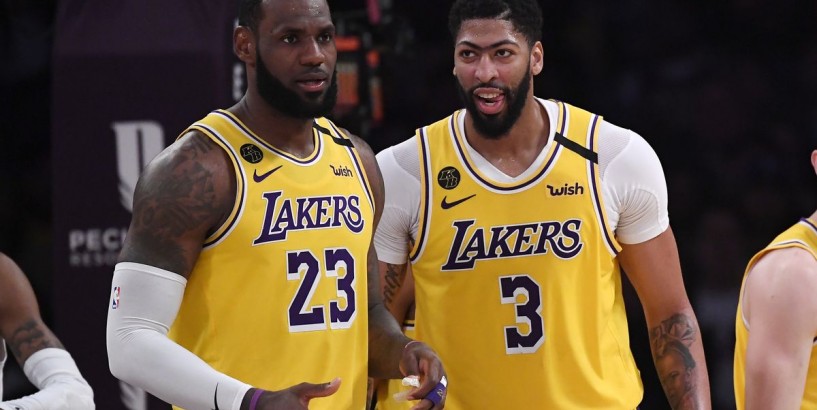 It was a lighter moment for James, the face of the NBA . On Thursday, he’ll take center stage once again when the league’s season officially resumes inside its bubble at Disney World near Orlando, Florida, after a four-month hiatus due to the coronavirus pandemic.

James and his fellow players will finally play meaningful games once again — as meaningful can be in this environment, at least.

When the NBA restarts Thursday, the game will look familiar but there will be glaring differences, especially for those who haven’t tuned into the exhibition games. For one, no fans will be in attendance. Players are now socially distanced while on the bench, sitting apart. And the court will also feature “Black Lives Matter” painted on to the court, across from the center stripe.

Twenty-two teams were invited to the bubble, but Zion Williamson and the New Orleans Pelicans will get things started against the Utah Jazz. Then, James and the Lakers take on Kawhi Leonard and the Los Angeles Clippers.

In the past, James has had a habit of deactivating his social media accounts during the playoffs and staying away from his phone. But in speaking to reporters, James revealed that ritual won’t happen this year.

Not with the pandemic and his family being hundreds of miles away.

“I can’t afford to,” James told reporters. “I have to continue to check in with my family every single day. Checking in with my mom, making sure everything is still going well. Especially in the uncertainty that 2020 has brought to all of us.”

As part of the restart, players and coaches will continue to take a stand against racial injustice and police brutality. Those efforts have intensified since George Floyd, a Black man, died while in Minneapolis police custody in late May. On Wednesday, reports indicated that the Pelicans and Jazz planned to kneel around the Black Lives Matters signage during the national anthem.

While the NBA has a rule that specifically requires players and coaches to stand for the anthem, Commissioner Adam Silver told “Good Morning America” on Wednesday that he respects “peaceful protest.”

“I’m not sure what our players will do when they come out tomorrow night,” Silver said. “We’ll of course address it at the time, but I also understand these are highly unusual times.”

Multiple players and coaches, including Washington’s Scott Brooks, said they were still determining their plans. Brooks said whatever the Wizards did, they would do it “all together.” The Wizards open the season Friday against the Phoenix Suns.

From a basketball perspective, the product could look and sound a little different, as well. Some teams like the Philadelphia 76ers and the Orlando Magic benefited from the time off with players (Ben Simmons, Jonathan Issac) returning from injury. Like MLB and NHL, the NBA has also experimented with adding fake crowd noise.

According to USA Today, broadcasters will also amplify their microphones to pick up additional sound. More sneaker squeaks. More shots clanking off the rim. Even some trash talk will likely be heard.

Those in the arena can tell the difference with the league’s new set up.

“You hear everything,” Brooks said. “There’s a lot of times when (normally) you can only hear things on your side of the floor. But now you can hear both sides. You can hear the communication with the referees. It’s going to be interesting.”

So far, the NBA hasn’t had an issue with coronavirus cases in the bubble. The league revealed Wednesday that of 344 players tested since July 20, there have been zero positive tests.

It all leads to a 6:30 p.m. Eastern start. The Lakers ‘ matchup against the Clippers begins at 9 p.m.