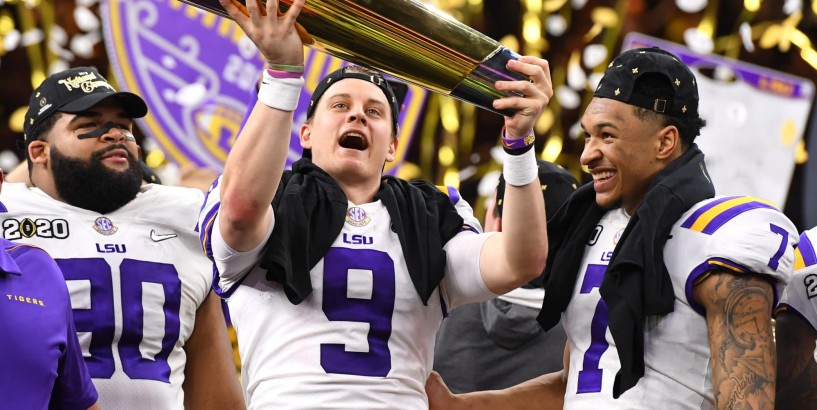 Joe Burrow gets road named after him near LSU campus

Joe Burrow, LSU Tigers. (Photo by Jamie Schwaberow/Getty Images) Joe Burrow is forever immortalize in Louisiana The LSU Tigers hadn’t won a National Championship since future NFL backup Matt Flynn led them to a 38-24 win over the Ohio State Buckeyes in the 2008 BCS Title Game. But then, Joe Burrow arrived as a transfer student-athlete from Ohio State.

In his lone year with the Tigers, Burrow had the most historic season of any college football quarterback. After leading LSU to an undefeated record and earning a Heisman Trophy, Burrow blew out Clemson to win the 2020 National Championship Game.

Louisiana will forever be grateful for bringing the state back to glory, and they already got a head start in the form of naming a street near the LSU campus, “Burrow Road.” Back in March, a developer in Baton Rouge had pushed for the city to rename Henry Adams Road to honor the two-year LSU signal caller. CHECK THIS OUT!! Louisiana officially has a road named after Joe Burrow ( @JoeyB ) … it's off Highland Road near the @LSU campus. @WAFB pic.twitter.com/wJnEKy1uay

Baton Rouge didn’t have to do this for Burrow, but they wanted commemorate a football legend who spent a small portion of his life in their city. Through 15 games, Burrow recorded 5,671 passing yards, 60 touchdowns, and six interceptions all while completing 76.3% of his passes. Besides Clemson, Burrow earned high-profile wins over the Oklahoma Sooners and Alabama Crimson Tide.

Prior to the NFL Draft, Burrow purchased a bill board to thank LSU and the Bayou State for the memories. RELATED PRODUCT Cincinnati Bengals BBQ Kit Cooler - Black Buy Now! Buy Now!

Even though Burrow will be donning different tiger stripes with the Cincinnati Bengals, he’ll know that he’ll have unwavering support from his home away from home.