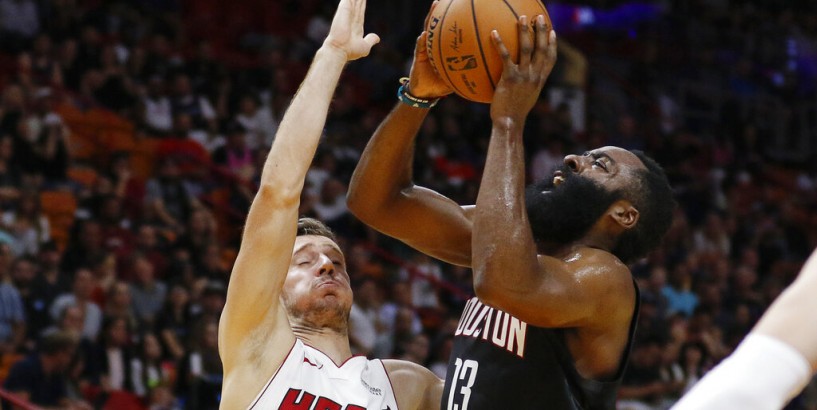 Russell Westbrook isn’t there yet.

Harden, the reigning NBA scoring champion, scored 44 points in 35 minutes — 18 of those points coming in the third quarter — and the Houston Rockets ended the preseason with a 144-133 victory over the Miami Heat on Friday night.

Harden was 12 for 26 from the field, 8 for 16 from 3-point range and 12 for 13 from the foul line. He also had seven assists and five rebounds, and finished the preseason averaging 31.5 points.

“That’s the way he’s wired,” D’Antoni said. “He loves to play. I couldn’t take him out in the fourth quarter if I wanted to. He’d play 48 if he could. He’s wired that way. He gets better every time. I don’t know what his ceiling is. But he’s, to me, the most improved player every year. He’s just ridiculous.”

The Rockets didn’t get out of the game unscathed, however. Austin Rivers could play only seven minutes before being downgraded to out with neck soreness, and Westbrook — who has been dealing with some dislocated fingers on his right hand — left the game in the fourth quarter in obvious discomfort.

Westbrook lost the ball, immediately grabbed at his right hand, then ran off the court and straight into the tunnel leading to the Rockets’ locker room without stopping. He finished with 16 points, four rebounds and four assists on 6-for-13 shooting in 26 minutes.

“Both of them told me they were OK, so we’ll take that,” D’Antoni said.

D’Antoni said Westbrook aggravated the finger issue, and will be fine. A top task for the Rockets in this preseason was figuring out all the ways to best utilize their new point guard, with D’Antoni acknowledged is still a bit of a work in progress.

“I was with him for eight summers in USA Basketball,” D’Antoni said. “He’s a great guy. Works hard. Unbelievable athletically. Just the speed and power that he can play with … he’s relentless.”

Some of D’Antoni’s favorite moments during Westbrook’s brief Houston tenure so far have been ones that few people have seen — since they’ve come in practice, in moments where the competitive juices have perhaps overflowed.

“He gets ticked off in practice sometimes and the next 3 minutes, he’s killing people,” D’Antoni said. “He needs that competitiveness to juice him up. He’s not like the old guy at the Y who will knock you down and shoot it. No, no, he’s coming at you with all the athleticism that he has.”

Westbrook will have a few extra days to get through the issue with his fingers. He and the Rockets don’t open the regular season until playing host to Milwaukee on Thursday.

Kendrick Nunn scored 40 points in 40 minutes for Miami, making 15 of 27 shots. Tyler Herro scored 14 points and Bam Adebayo made all six of his shots on the way to a 13-point, 11-rebound night.

Jimmy Butler didn’t play for the Heat, held out to rest.

Nickell Alexander-Walker and Josh Hart each scored 17 points, and New Orleans wrapped up an unbeaten preseason without injured No. 1 pick Zion Williamson.

Williamson has a sore right knee and remained in New Orleans to undergo further testing and evaluation. Coach Alvin Gentry said he didn’t have any update on the power forward’s condition, though ESPN.com reported Friday, citing sources, that Williamson would miss multiple weeks.

Even without him, the Pelicans (5-0) put up plenty of points after coming into the game scoring a league-leading 127.8 per game during the preseason. Brandon Ingram scored 16 points and JJ Redick had 14.

Williamson looked as good as advertised while averaging 23.3 points on 71.4% shooting in four preseason games, and Gentry was asked if he was concerned the injury would dampen enthusiasm in New Orleans.

“Yeah, but it’s not anything that we can worry about,” Gentry said. “We’ve got games to play and bottom line is that we will be in Toronto in a few days playing on opening night and we’ll have to put five guys out there and play.”

Julius Randle had 20 points and nine rebounds against his former team, but missed a 3-pointer that would have won it at the buzzer for the Knicks (1-3). Rookie RJ Barrett, the No. 3 pick who was Williamson’s Duke teammate, added 19 points.

Jordan McRae scored 17 points and Thomas Bryant finished with 15 points and 10 rebounds for Washington. Moritz Wagner scored 14 and Bradley Beal — one day after signing a $72 million, two-year extension — scored 13 for the Wizards.

Joel Embiid scored 17 points in 23 minutes for Philadelphia, which played without Ben Simmons. Tobias Harris had 13 for the 76ers.

Fred VanVleet scored 16 points and handed out eight assists for Toronto, which got 15 points and 11 rebounds from Serge Ibaka. Kyle Lowry got his first — and only — action of the preseason, scoring nine points in 26 minutes.

Kyrie Irving got his first extended action of the preseason for Brooklyn, scoring 19 points in 25 minutes. Irving played only 66 seconds in the Nets’ first game against the Los Angeles Lakers in China last week before aggravating a facial fracture and not playing on the remainder of that trip.

Some fans at the game wore shirts, held signs and chanted in support of Hong Kong during the Nets’ first game since returning from China. One sign was critical of Nets owner Joe Tsai, co-founder of the Chinese e-commerce giant Alibaba, who had written a Facebook post explaining why Houston general manager Daryl Morey’s tweet in support of Hong Kong protesters was upsetting to Chinese.

Patty Mills was 4 of 5 from 3-point range and scored 16 points, and LaMarcus Aldridge had 14 points and 11 rebounds for San Antonio.

DeMar DeRozan and Bryn Forbes added 14 points each and Rudy Gay scored 13 points for the Spurs (2-3).

The Warriors (2-3) took the lead early in the second quarter and held off a run that got the Lakers (3-3) within five points early in the fourth. Glenn Robinson III had 13 points and Draymond Green had nine points and 12 rebounds.

Zach Norvell Jr. made 5 of 10 from 3-point range and scored 29 points for Los Angeles. Kentavious Caldwell-Pope added 25 points and Devontae Cacok had 16 points and 10 rebounds.