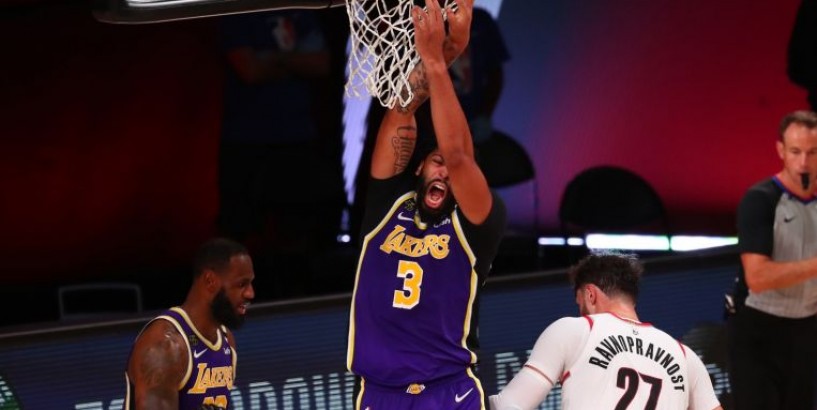 ORLANDO (Florida) • At 158, three behind leader Derek Fisher, LeBron James looks destined to become the player with the most number of play-off wins in National Basketball Association (NBA) history.

If that happens this season, it would mean that the Los Angeles Lakers will be one step closer towards their first championship since 2010 - a prospect the forward would love nothing more.

James passed San Antonio Spurs great Tim Duncan (157) on the list as his team outplayed the Portland Trail Blazers on both ends of the floor on Saturday for a 116-108 win in Game 3 of their Western Conference first-round play-off series.

The three-time NBA champion led all scorers, finishing with 38 points, while teammate Anthony Davis added 29 points as the Lakers took a 2-1 lead.

Since they linked up last summer, teams have struggled to cope with their All-Star partnership and the Blazers, who were paced by 34 points from Damian Lillard, suffered the same fate at Disney World.

Davis and James became the first Lakers pairing to have both 25-plus points and 10-plus rebounds in the post-season since Kobe Bryant and Shaquille O'Neal in the 2002 Western Conference Finals.

It is why critics have earmarked the team as one of the championship favourites, with James attributing their chemistry to a selfless attitude.

On how well they have clicked in what is their first year together, he said: "Because we're two guys who know who we are. We know who we are as human beings. We're not trying to be nobody else but our own identity, our own self.

"And when you know yourself and when you're confident in what you do, both on and off the floor and you know what you represent, then there's no ego.

"We want both of us to succeed, both on and off the floor. We want our families to be happy. We want each other to try to be as happy as possible... so when you're able to figure that out in life - who you are and what you stand for - then nothing else matters."

On overtaking Duncan, James was humbled to be mentioned in the same category.

"It's just always surreal for me when my name is associated with any of the greats," he said. "And obviously, you know how great Tim was in this league with that franchise... Basically, he lived in the post-season. That was his address."

Meanwhile, the Milwaukee Bucks looked more like the team with the best regular-season record in the NBA (56-17) as they rolled to a 121-107 victory over Orlando to take a 2-1 lead in their Western Conference play-off series.

Giannis Antetokounmpo - in the running for a second straight Most Valuable Player Award - scored 35 points and pulled down 11 boards, showing why the title contenders swept the Magic in all four match-ups before the post-season.

"It was a lot easier because we played defence," said the Greek forward. "Once we play defence, we're able to run in transition and it makes the game easy."

Elsewhere in the East, Miami withstood a furious Indiana rally for a 124-115 win and 3-0 lead, while Oklahoma City edged out Houston 119-107 to reduce their Western series deficit to 2-1.