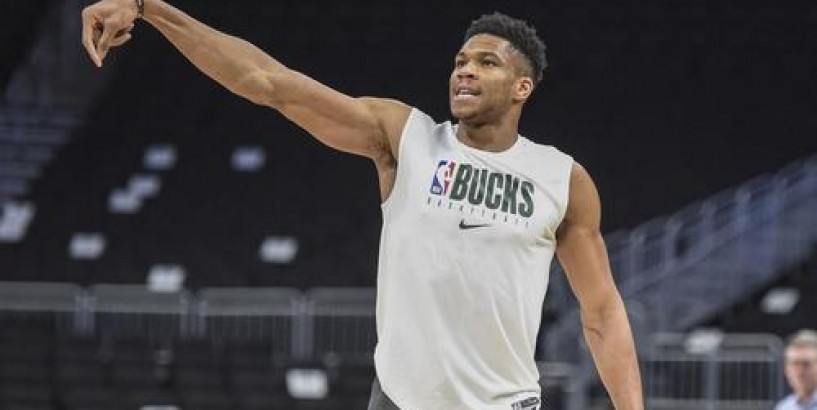 On Wednesday night, the new apple of the Warriors' eye strolled into Chase Center.

Giannis Antetokounmpo and the Milwaukee Bucks arrived in the Bay, grabbed a W over the undermanned Warriors on Greek Heritage night no less and jetted out. But the game isn't the story,

Antetokounmpo has the opportunity to enter free agency during the summer of 2021, if he turns down the $250 million max extension the Bucks are sure to offer him. If he does that, it's clear the Warriors' ownership and fans alike would love to see The Greek Freak come to the Bay Area.

Warriors fans at Chase Center already have custom Dubs jerseys with Antetokounmpo's name stitched on the back. The reigning NBA MVP, however, claims he didn't see it.

The Warriors currently are having a down season, with Kevin Durant 's exodus and injuries to Steph Curry and Klay Thompson sending them hurtling to the bottom of the NBA. But the Warriors, as usual, have a plan. They know they'll be back near the top of the NBA next season when Curry and Thompson return, and they'd love nothing more than to add Antetokounmpo to the mix in the summer of 2021, have him take the keys to the franchise from Steph and become a Bay Area sports icon.

[ RELATED: Why Warriors fans won't see much more of Smiley this season]

Antetokounmpo received a thunderous reception on Greek Heritage night, casually dropped 30 points, made two young Bucks fans' night by giving them his sneakers and strolled out of Chase Center to continue his title chase with the Bucks, leaving those Warriors fans with dreams of Giannis living in the clouds.

But if the Warriors have their way, there will be a lot more No. 34 Warriors jerseys in the stands come fall of 2021.