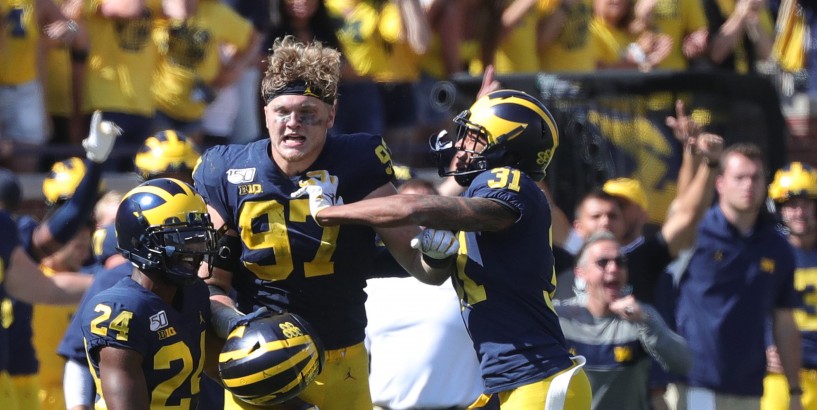 Aidan Hutchinson could only recall a few details from the final play of No. 7 Michigan's 24-21 win over Army . Like how the Wolverines were in their base defense. And the hit that he put on Kelvin Hopkins Jr. that jarred the ball loose. And, of course, the ensuing celebration as the Wolverines avoided disaster. Regardless of the gaps in Hutchinson's memory, he's guaranteed to have one memento from Saturday's game: The game ball sat in front of him on the podium after U-M's double-overtime victory over the Black Knights. “He just kept it from the last play of the game," said Michigan coach Jim Harbaugh. "I did see him carrying the ball. "He looked like he just played a football game that was a heckuva fight and really contributed to the victory. Very proud of him. Big hug afterwards.” Hutchinson and the rest of Michigan's defense came up with several huge plays , none were bigger than the last. On third-and-11 from U-M's 26-yard line, Army dialed up a pass. Defensive end Kwity Paye beat the left tackle and forced Hopkins to step up into the pocket — whereupon he was met by both Hutchinson and defensive tackle Carlo Kemp. The ball squirted free, and Paye fell upon it. Game over. “We knew the game was on the line," Hutchinson said. "Offense kicked a field goal. We knew if they scored (a touchdown), it’s game. We all came together as one unit. " As I said before the season started , this is a tight unit. Those are my brothers out there. So we came together and did what we do.” It was one of a few key stops Michigan's defense came up with throughout the game. Cornerback Lavert Hill intercepted a pass on third-and-goal, saving at least three points. In the fourth quarter, the Wolverines stopped Army twice — including on the final drive of the game, when Michigan held the Black Knights to a missed 50-yard field goal. Army finished with just 243 total yards, averaging 3.68 yards per play. U-M's offense certainly didn't help matters — two of the Black Knights' three scoring drives came after the offense fumbled. Although the offense's struggles put the defense in a difficult situation , Hutchinson said his unit didn't get frustrated. “People struggle sometimes," he said. "That's football. That happens all the time. You’ve just got to keep trusting your brothers to do their job and keep doing what they’re doing and press through. "Football’s a game of adversity. I trusted our offense to get it done, and they did.” It wasn't easy to stop Army's unique scheme, with offensive linemen that cut blocked and a quarterback who was nearly flawless running the triple option. But, for the most part, it held strong. And would've deserved the game ball, if Hutchinson hadn't acquired it so quickly. "That was a gem of a defensive performance," Harbaugh said. "There’s no doubt about it. Talk about the last play, the last series. Just the entire football game. We made mistakes offensively, penalties and turnovers, and turnovers on downs, that the defense was not in the best positions. But played great. "... There’s a lot of guys that just played great. Don Brown did a great job preparing, called a great game. Called a great play on the last play of the game. Got home, got the turnover, got the win.” Contact Orion Sang at osang@freepress.com . Follow him on Twitter @orion_sang . Read more on the Michigan Wolverines and sign up for our Wolverines newsletter .